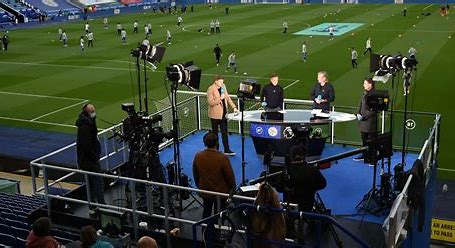 Initial bids came from four parties that were interested in the management and running of the newly-founded English Premier League – two of which came from groups that were considered to be non-starters, one of which hoped to set up a football-only pay-TV channel.

ITV didn’t want to work with anyone else, meaning that the BBC joined Sky’s bid with the promise of a return to regular weekly highlights on Match of The Day.

Over the previous four years, they’d had been limited to the FA Cup only while ITV, believing highlights to be outdated, hadn’t bothered with them at all much beyond occasional regional broadcasts and cramming in the goals from every other First Division match into a five-minute slot during the weekend’s live match.

New Premier League chief executive Rick Parry summed up the mood in a speech to the Football Writers Association in October 1991 when he mentioned that, “in the last deal ITV bought the entire product and didn’t use 90 per cent of it”.

ITV had a reputation for this. On April 21,1991 Sheffield Wednesday played Manchester United in the League Cup final at Wembley, but when Wednesday won the match 1-0 the city’s own regional ITV broadcaster, Yorkshire Television, cut away from the post-match celebrations to show something called War of The Monster Trucks instead. Wednesday supporters considered this an example of pro-West Yorkshire and anti-South Yorkshire bias – there has been a long-running Sheffield Wednesday fanzine of that name – but more broadly, showing this lack of care towards the game highlighted that ITV hadn’t done a particularly good job with their exclusive deal with the Football League.

Manufacturing business had a vested interest in BSkyB’s bid, and was overheard on the night that the final decision was to be made, telling Sky’s pugnacious chief executive Sam Chisholm details of the ITV bid and urging Sky to “blow them out of the water”, which they duly did.

ITV’s bid was £155 million per year for 30 live matches, a modest increase on the amount of coverage that was already being shown. Sky’s was £191 million for 60 live matches, which they puffed up with the BBC’s payments for highlights and expected overseas revenues (which were at the time about zero) to make a total bid expected to raise £304 million a year, although it never actually did reach this amount.

When the clubs came to vote, they did so on the basis of self-interest. Four of the ‘Big Five’ clubs voted for ITV, along with Leeds United and Aston Villa, but two clubs abstained and the other 14 all voted for Sky, including Spurs. Those in favour of the ITV bid argued that what they considered to be ‘saturation coverage’ could negatively impact upon other commercial revenues, but this (frankly weak) argument couldn’t sway the vote.

With the promise of more money and more coverage, the will of the biggest clubs was overturned and the Premier League opted to go with the new broadcasters instead. ITV took the matter to court but lost and signed a considerably weaker contract with the Football League instead.

Eight clubs, unhappy with the way that the enthusiastically pro-Sky Parry had conducted himself, blocked a £3 million sponsorship deal with the Bass brewery company, meaning that the FA Premier League would start its life without a main sponsor.

Posters starting appearing over the summer of 1992 advertising ‘a whole new ball game’, even as the England national team’s lacklustre performance at that summer’s European Championships in Sweden demonstrated that some things never really change. But things would be different in the Premier League. Sky Sports would be showing live matches at 4pm on Sunday afternoons and on Monday evenings, while Match of the Day returned on a weekly basis for the first time in four years.

Referees would be wearing green and black, and both player names and squad numbers would follow on the backs of players’ shirts for the first time, a year later. Other attempts at innovation, such as the now-infamous Sky Strikers cheerleaders, would later be quietly forgotten. On that first weekend, Nottingham Forest beat Liverpool 1-0 in the first live televised Premier League match.

And more noticeably than anything else, that first Premier League season was played out against a backdrop of building sites. Manchester United, who ended that first season with a first English league championship in 26 years, did so in front of an average crowd of just 35,152 people, with the capacity of Old Trafford having been slashed so that urgent rebuilding work could be expedited.

The average Premier League attendance in the first new season of that whole new ball game was 21,175. For the 2021-22 season, it was 39,472. In 1992 it was the loss of the terraces and the construction of new all-seater stands that was the break with the past that felt most sudden and absolute.

The growth in inequality between clubs would take years to diffuse. The first season of the Premier League being played out against a backdrop of half-built stands was an immediate demonstration that things were going to be different.

The football of 1992 was obviously more closely related to that of 1982 than to that of 2022, and the Premier League didn’t reinvent everything overnight. But this was a great leap forward, after 10 years of moving in this direction.

ITV had tried to acquire exclusive rights in November 1978, only for the matter to draw such ire – questions were asked in parliament – that it earned the nickname ‘Snatch of the Day’ and was shelved. And by the time they finally got those exclusive rights a decade later, the seeds of the future of the game had been sewn.

Matches were shown live on the television, while Spurs became the first club to become a public limited company in 1982. Sky Sports may well have marketed a whole new ball game in 1992, but the seeds for it had been sewn over the years building up to it.