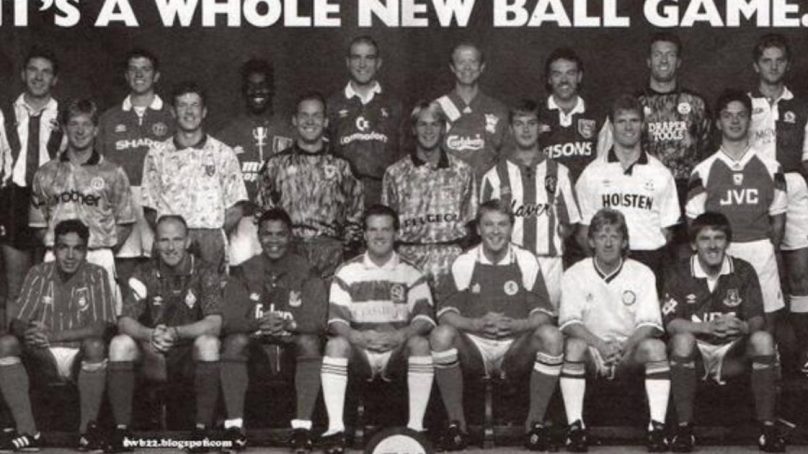 By the time the formation of the Premier League was announced on April 5, 1991, much had changed from the FA’s original lofty intentions. Of the suggestions in Alex Fynn’s report on how a new top division could segue with the interests of the game in a general sense, only the one – reducing to 18 teams would mean a greater slice of the pie, when it became available – was still in play, and that would not survive the actual formation of the league.

There was a specific point at which the amount of control that the FA were prepared to cede to the clubs became perfectly apparent. With momentum towards this new league – now rebranded as the ‘Premier League’ rather than the ‘Super League’ – starting to build, the FA held a meeting with club chairmen at which the finer points of this new operation were to be discussed.

When the subject of reducing to 18 clubs came up, clubs asked FA chairman Sir Bert Millichip whether this was mandatory.

Millichip’s response, “It’s your league, you decide”, may have been intended to refer to the matter of reducing the number of top-flight clubs only, but it was widely interpreted that this new league would be running itself, beholden to no-one. By the end of that meeting, the foundations of the new league would be in place, and the Premier League would have complete control of its own destiny.

The FA may have seriously damaged the Football League, but they’d also ultimately sacrificed a degree of their own authority.

Two points within the ‘founders agreement’ would go on to shape the way in which the league operates, beyond any others. Firstly, the committees and executive control of the Football League would be a thing of the past; the clubs themselves would vote on matters relating to their governance, with a two-thirds majority required to effect any change.

And secondly, the distribution of television money would be very different, with 50 per cent to be split equally between the clubs, 25 per cent according to the previous year’s league position, and 25 per cent on the number of times a club appeared in live televised matches.

Within a year, the Premier League would be a completely independent body, beholden to neither the Football League nor the FA. In seeking to cauterise what they considered the ‘threat’ of the Football League the FA had handed a large amount of control at the top of the game to the biggest clubs.

But how much would all of this be worth? Nobody exactly knew, but it was expected that there would be two main contenders to take on these new television rights. ITV had, of course, been the driving force behind this breakaway, with their Head of Sport Greg Dyke having been involved in talks going back to 1988.

Sky Television had first gone on-air on February 5, 1989 with four channels, but it had not initially been expected that sport would be the main driver behind the growth of pay TV. Sky’s first encrypted channel, The Movie Channel, had become their first premium channel exactly a year later, but at the time Sky had been involved in a fierce battle to get exclusive movie rights from the major Hollywood studios with their competitor, British Satellite Broadcasting, and although these punishing negotiations had ended up benefitting Sky more than BSB, both companies were left bloodied by the sheer cost of signing these contracts.

Indeed, by the end of 1990 the two companies had merged as BSkyB, although such was the condition of BSB by this time that this ‘merger’ was really more of a takeover. But as BSB died, Sky was also haemorrhaging money and there were few guarantees of how long its owner Rupert Murdoch would keep throwing money at it. With the merger, BSB’s The Sport Channel had been brought into Sky’s stable, and on April 21, 1991, just over two weeks after the announcement of the formation of the Premier League, it was rebranded as Sky Sports.

It was clear by this time that the Premier League was going to happen. The Football League had reacted to the announcement of the new league by heading straight to court, on the basis that their rules stated that clubs had to give three years’ notice in order to resign from the Football League.

The League went on to lose this case at the High Court, and much of the 1991-92 season was spent sorting out finer details such as promotion and relegation for the start of the following season. But there was still one very important question left to answer: who would be the Premier League broadcast partner once the 1992-93 season began?

Broadcasters started preparing their bids for Premier League rights towards the end of 1991, with no-one entirely clear on who would end up as the front-runner. Despite the BSB merger, Sky still only had a tiny number of subscribers and all the effort and cost that had gone into signing exclusive contracts with studios for their movie channels had not resulted in much of a take-up from viewers.

As late as October 1991, it had even been expected that the rights would end up being shared, with a Premier League working party suggesting that the rights could be divided between one live free-to-air game a week, one pay-TV game per week, one highlights programme each and one promotional magazine show on free-to-air.