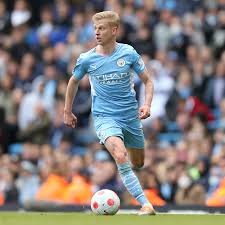 Eight years after being forced to play football for free, Ukraine captain Oleksandr Zinchenko is set to become a £30 million footballer.

The 25-year-old is poised to leave Manchester City for Arsenal, representing the next step in a journey which might have been over before it began. It’s testament to his strength of character and determination to prevail after plenty of distractions off the field as well as on it.

Back in 2014, he was part of a Shakhtar Donetsk side which took on Arsenal in the UEFA Youth League, but left the Ukrainian side not long after as war broke out in Donbas. Then still in his teens, he only made his way to the top after playing for free before making the most of his eventual move to England.

Towards the end of last season, Zinchenko was among the more vocal footballers amid Russia’s invasion of Ukraine, and held up his country’s flag as City won the Premier League. Here, we take a closer look at his journey – from north London back to north London in less than a decade, but with a lot in between.

In February 2014, as Arsenal’s under-19 side took on their Shakhtar counterparts at Meadow Park, a number of future Gunners were involved. Ainsley Maitland-Niles and Hector Bellerin are still at the club, while the likes of Serge Gnabry and Alex Iwobi picked up first team minutes before moving on.

Zinchenko was in the opposition midfield, but soon he would be forced to tear up his contract. War broke out in Donbas in April 2014, and – as reported by the BBC – the 17-year-old’s mother believed the family would be safer in Russia. Still in his teens, and without a club in his new home, the then-midfielder stayed fit with games of street football and had trials at clubs in amateur leagues before eventually landing at FC Ufa after training for free with another Russian club, Rubin Kazan.

“He had no salary and thus players just collected money so that he would be able to buy himself something in the city,” former Rubin coach Rinat Bilyaletdinov told the BBC. “Eventually we were informed that signing him was impossible, and he left.”

“The serious influence of agents with their requests and the throwing of the player himself eventually forced Kazan to refuse to sign Zinchenko,” a report from Russian outlet Business-Gazeta read at the time. “Only the performance of a football player in Ufa will show whether Rubin should regret it.”

It was during his spell at Ufa where Zinchenko’s Arsenal connection deepened. Hale End graduate Emmanuel Frimpong was also on the books of the Russian club when the Ukrainian arrived, and, according to reports in Calciomercato back in 2016, even helped him learn English ahead of his 2016 move to Manchester City.

“He never paid me for my work,” Frimpong would later tell Sport24 (via The Independent). “Write that Zinchenko owes me. We agreed with him that he would pay me when he left. I usually charge $2,000 an hour but he is my friend, so there is only $1000 for him. I spent so much time on him! Tell him it’s very important.”

By the time Zinchenko was confirmed as a City player, he had already established himself at international level. A goal against Romania in May 2016 saw him break Andriy Shevchenko’s record as Ukraine’s youngest ever goal-scorer, and he would feature in all three group games as the national side bowed out of Euro 2016 without scoring a goal.

It wasn’t yet time for him to get his City chance, though. A year on loan at PSV Eindhoven would come first, where he played 12 times in the Eredivisie as Philip Cocu’s side finished third despite losing just twice all season.

While he continued to play in midfield for his country, Pep Guardiola had different plans for the former Ufa man. Zinchenko played eight league games in the 2017-18 title-winning season, all at left-back and has predominantly been used in defence by the Catalan coach for his entire time in Manchester.

More titles have followed, including the Premier League trophy in 2021, but things haven’t always gone swimmingly with Guardiola. Part of this can be attributed to comments made by his wife Vlada Sedan in 2020, after City suffered a shock defeat against Lyon to exit the Champions League at the quarter-final stage.

“You saw what happened,” Sedan said (via Goal). “I’m not a football player, not a coach, not a critic or an analyst. I understand that my opinion is not authoritative.

Zinchenko himself responded, clarifying how he felt about Guardiola’s tactical change. He added that, while his wife is a journalist, she was making her comments as a fan.

“On the night we lost to Lyon that doesn’t mean the manager was wrong to try,” he said. “If you have seen my interviews in the past and the way I talk about our manager then you can believe me. He is No 1.”

Sedan later shed more light on a joke Guardiola and ZInchenko shared when the manager turned 50. The incident at the celebrations, back in January 2021, suggested manager and player had buried the hatchet and were ready to laugh amongst themselves.

“Zina told him, ‘Already 50, old age’. Kidding in his own style. Pep looked at him and said: ‘Alex, the most important thing for me is to be liked by your wife and all will be okay…” she said.

With 60 appearances across the last two seasons, Zinchenko has certainly established himself as a regular member of Guardiola’s squad if not his first team. And all this against the backdrop of more warfare in his home country – something which, as we have seen in the player’s interviews, has affected him deeply.

“I’ll be honest, if not for my daughter, my family, I would be there,” Zinchenko told the BBC shortly after the Russian invasion of Ukraine in 2022. “I’m just born like that. I know the people from my country, the mentality of them, and all of them, they think exactly the same.”

His family and friends were able to convince him to stay in England, and he continued to turn out for City as they clinched the Premier League title on the final day of the season. On the way, though, there were emotional pleas as he dealt with everything going on in his homeland.

“Every Ukrainian wants one thing – to stop this war,” Zinchenko said in May, ahead of Ukraine’s World Cup play-off against Scotland. “I have spoken with people from all around the world, from different countries, and also some Ukrainian kids, who just don’t understand what is happening back in Ukraine.

“They only want the war to stop. They have one dream – to stop the war. When it comes to football, the Ukrainian team have their own dream: we want to go to the World Cup. We want to give incredible emotions to the Ukrainian people because Ukrainians deserve it so much at this very moment.”

He had already draped himself in a Ukrainian flag during his club’s title celebrations, and played his part in the victory over Scotland. However, defeat against Wales meant Zinchenko and his international teammates fell short of making it to Qatar.

As he prepares for the start of the 2022-23 season, Zinchenko is readying himself for the next chapter in his career. Arsenal look set to give him the midfield berth where he has thrived at international level, along with a reunion with former Manchester City coach Mikel Arteta and former City forward Gabriel Jesus.

Zinchenko’s path has been a long and complicated one. However, upon completing his move to Arsenal, he’ll have shown the value of persistence after overcoming more than most.

After failing to capture Kyiv, Russia has shifted to devastating bombardments of cities in east, south Ukraine