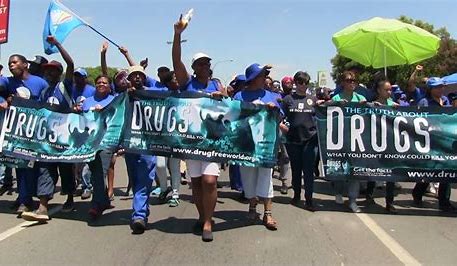 A bizarre sight welcomes anybody who enters the home of Asia Bianca and her husband in the Kenyan coastal town of Malindi. An infant’s slippers, strewn with cigarette waste and drug paraphernalia. This is no ordinary home.

The slippers belonged to their little daughter, who died six months after she was born.

“When we went to bed, she was fine. Then when I woke up, she was foaming at the mouth. So, I got scared and hoped when I was high on heroin that I hadn’t placed my hand or leg on her, causing her to suffocate,” a visibly downcast Bianca says.

Despite doctors ruling out her fears, Bianca still carries the guilt of her daughter’s death. The 20-year-old and her husband are some of the 3,000 active injecting drug users in Malindi. She says she was introduced to the habit by her ex-boyfriend, who used to lace her cigarettes with heroin secretly. By the time she realised what was happening, she was already hooked.

The World Health Organization (WHO) describes substance abuse as the harmful or hazardous use of psychoactive substances, including alcohol and illicit drugs. It says that illicit drug use has adverse health and social consequences because it puts a heavy financial burden on users, their families and society.

“The government has forgotten us. We are left homeless, sick at home or sick in the streets, so we have no choice but to support each other,” Yassir Abdallah, a recovering addict in Malindi, laments.

This is the hemp plant of legend. Intoxicating cannabis can be obtained from certain varieties, so its cultivation is strictly regulated in Germany. Unlike 200 years ago, hemp plants in the country are completely out of the public eye, paving the way for myths generated from the camps of supporters and opponents alike.

The UN estimates that by 2030, the number of drug users in Africa will have increased by 40 per cent. Across the continent, drug addicts often face discrimination and a lack of support, making it difficult for them to regain their lives even if they stop using.

“Such persons need treatment and critical attention,” said Richard Opare, a former addict who is now a drug addiction management professional in Ghana’s capital, Accra. “When they walk into the [rehabilitation] centers, many of the drug addicts are not ready,” he said.

He explained that there was a screening system to determine which drug(s) an addict had used. Afterwards, therapists conducted an assessment to ascertain the severity of the problem. He said that drug addicts were given medical attention through the detox stage to ensure that they got better.

A syringe with needle on a spoon with a lighter next to them. Best known for its white sandy beaches and Italian tourists, Malindi is home to one of the biggest groups of heroin addicts in Kenya. Like most coastal towns in the East African country, it is used by international traffickers as a transit point for drugs transported from Afghanistan to the West.

According to the UN drugs agency (UNODC), the most often used illicit drug on the continent is currently cannabis. The second most frequently used class of drugs are amphetamine-type stimulants (ATS), which include “ecstasy” and methamphetamine.

However, more and more drug users are beginning to inject substances, although the practice is deemed particularly risky as sharing contaminated needles and syringes can transmit viruses such as HIV and Hepatitis B, and C.

In West Africa, Guinea-Bissau is also an important hub for drug trafficking – especially for cocaine. It began its transformation into a narco-state in 2005, when former president Joao Bernardo “Nino” Vieira — who had ruled the country with an iron fist from 1980 to 1999 – was re-elected after returning from six years of exile in Portugal.

Experts say that the Covid-19 pandemic, unemployment, the high cost of living and a lack of prospects have created “a perfect storm” for substance abuse on the entire continent.

“When schools closed [during the lockdown], the number of young drug users shot up,” says Alphonse Maina, a volunteer with the Omari Project, a community-based rehabilitation centre in Malindi.

“In Malindi, if you are not taking heroin, you are taking khat, smoking marijuana or cigarettes.”

He and other experts say that people should treat drug abuse as a medical condition, not a crime. They say that it’s critical to combat stigma and provide those who request it with free rehabilitation and medical care.

“If you’re arrested with a small portion of heroin or cocaine for personal use, you go in for 15 years,” Wamala Twaibu of the Uganda Harm Reduction Network says. His initiative has been criticised for offering legal support to those arrested for injecting drugs such as heroin.

“The law is not fair. And what is happening is that law enforcement is using the law to extort. To get money from these communities, already disadvantaged communities.”

At the moment, the only support for Asia Bianca is her husband, who is himself an addict.