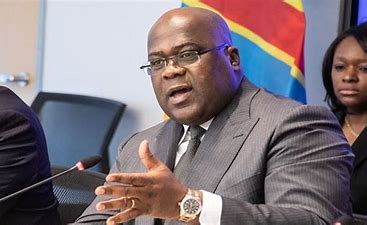 There are conflicting reports that a second coup attempt in as many months to oust the Democratic Republic of Congo (DRC) President Felix Tshisekedi was on Sunday foiled after a senior military officer tipped off the president before he flew out to Addis Ababa, Ethiopia, to chair the African Union heads of state and government meeting.

President Tshisekedi was saved from the jaws of coup plotters by a military general identified as Tango Fort in four voice clips sent to Tell by a source in the capital Kinshasa. It was not immediately clear why or how the ‘whistleblower’ backed out of the plot that had been in gestation since the last similar attempt early last month.

According of profiles of senior DRC officers posted on the government website, General Amisi Tango Fort is DRC’s land forces commander. However, Tell could not independently verify if the general is the same man referred in the voice clips is the same officer who to alerted the president to his imminent ouster, just over four years after assuming office in 2019.

According to the voice clips exclusively obtained by Tell, Gen Tango Fort had an eight-minute meeting with the president at the VIP lounge moments before he flew out of the Kinshasa-Ndjili International Airport t Ethiopia. The president delayed his departure by five hours – from 5pm to 10pm – as Gen Tango attempted to dissuade him from leaving the country.

Following the abortive coup, a number of top military commanders in DRC have reportedly been arrested and detained for plotting the ouster of Tshisekedi on Sunday, while he was away in Addis Ababa where he was scheduled to address the 32nd African Union heads of state and government meeting.

The coup attempt, if confirmed will be the second in as many months after similar incident was reported early January and linked to Tshisekedi’s predecessor, Joseph Kabila.

Another clip that appears to refute allegations of attempt ouster Tshisekedi from dismissed the reports as misleading and accused the president of attempting to look sympathy from the public as an excuse for his unfulfilled promises of economic reforms and war on runaway corruption.

It translates loosely to: “This is Tshisekedi’s righthand man. He has arrested his own (the president’s) advisor on security. He is known as Francois Bea. He has detained him on allegations that he had planned a coup d’eta while he was away in Addis Ababa. The president left firm instructions that he should be arrested during his absence. The report claims that there was a plot to overthrow the president. But we know these are lies being peddled by Tshisekedi, who is unable to lead the country.”

According the audio clips, claims of a coup d’eta is the work of the president who is accused of failing to navigate the country out of the economic crisis wrought by the coronavirus pandemic and the insurgency in the mineral-rich east that is blamed on Islamic States militia.

“Having failed to deliver on his promises of economic prosperity, he is growing increasingly apprehensive as we draw closer to the next election in 2023. He is looking every reason and excuse to postpone elections. The other option is he wants to cause civil unrest and use it to form a government of national unity that would ensure he remains at the helm. Claims of a coup is a creation of the president and his henchmen to use it as a reason to remain in power,” the other source says.

The source who claims to have a high-ranking brother in the army says further, “I can’t reveal his name because he a close ally of the former president (Kabila). He told me that the talk of a coup is a joke. What the president is doing will boomerang and could haunt him out of office.”

In the one of the clips that appears to absolve retired president Kabila from the simmering political turmoil in DRC, a man is heard saying in Lingala, “The plan didn’t work out because of Tango Forte. The planners had contacted Tango Forte to join them but he declined. So, Tango Forte informed the authorities and that is how the coup d’eta was foiled. Since last week, his house has been surrounded by the military officers. They have reinforced security around his house. There has been indiscriminate arrest of people since Saturday that continued to Monday morning.”

Asked to shed more light on the latest turbulence, a source that appeared sympathetic to the president responded, “My brother, I am in a public place, and again, I don’t know you. I am not sure who I am talking to. So many people have been calling me. So, I don’t who I am talking to. But in brief, the coup d’eta was supposed to take place yesterday (Sunday). Tango Forte is the guy who foiled it. He accompanied the president to the airport and they had a secret meeting at the VIP lounge before the president left (for Addis Ababa, Ethiopia). They spoke for about eight minutes. I am in a public place and cannot say more than that.”

In another clip, the source claims the coup was planned senior military officers.