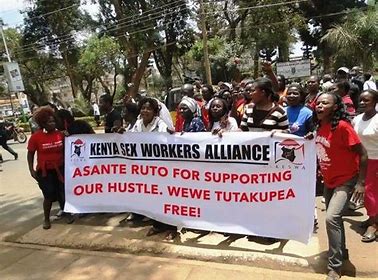 HIV/Aids counsellor and service provider at Nyahururu Referral Hospital William Ruto has seen it all: death caused by the virus and the stigma hat comes with it is devastating.

After years of waiting for patients at the hospital, Ruto opted to venture out and del with the problem before it exploded. The service provider saw the need to work with the commercial sex workers to create awareness and he is happy that the initiative has worked as cases of HIV/Aids have reduced.

Ruto notes that the main mission in the hospitals VCT centre is not all about testing, “We are also in a mission to give access for people to know their status and a gateway to HIV treatment care.

The father of four informs us that their patients’ conditions are confidential. The VCT centre has come up with a strategy that they use to treat positive patients. “We have come up with a treatment strategy that we call the 90-90-90, meaning knowing your status, access to treatment and viral suppression, where the virus is fought against,” explained Ruto.

“In the 90-90-90 strategy, we have two major actors; the first is the HIV testing counsellors, the second being the CEO who are mostly the doctors. we usually do this as we have had many cases of people testing positive who end up denying the results and that is a major challenge to us hence the need to start the strategy,” explains Ruto.

“We are mostly certified by the Regulatory Proficiency testing policy, which gives hope to those that doubt the results, and mostly we advise the positive patients to visit two different HIV testing service providers to be sure,” he said.

According to latest UNICEF data, the number of children living with HIV in Kenya fell from 180,000 in 2010 to 111,500 in 2020, partly due to improved access to services, including for more pregnant women. However, infection rates among young people (15-24) remain concerning.

“In 2020, they accounted for 35 per cent of new infections, with two thirds of cases among young women. In Homa Bay, one of the worst-affected counties, gender inequality, difficulties in accessing services and poverty are fueling high rates of unintended pregnancies and HIV,” UNICEF report says.

According to Ruto, after the positive patients have accepted the outcome, there is always a follow up session during which they are advised on better living.

He has secondary school education after attending Level at Ndururi High School, but has been trained Nurture as a counsellor.

In 2013 he started a pilot project that he presented to Nyahururu County referral hospital and at the same time he was in a youth Health project that helped the youths access HIV testing in a friendly way, delay onset of sexual behaviour, those who
are already sexually active got advised.

The passionate gentleman believes that his career is a calling he brought from Nandi County to Laikipia County and is committed to calling more people for testing.

Ruto notes that the VCT centres serve six counties namely Nyandarua, Laikipia, Baringo, Nakuru, Nyeri, and Samburu. He explains that the HIV virus is triggered by two things one being those living in rural areas and also urban areas, that those in urban areas get the virus mostly through partying and those in rural are at risk because of poverty.

He also reveals that the group that is at risk most is that the age bracket of 25-50 years and there is no for reason being ignorant since the condom dispensers are readily available in colleges, universities and also hospitals.

He said that the HIV virus has several target audiences.

“We have two categories of people, one being ordinary people, key population that consists of sex workers, drug users, homosexuals, fish forks and also truck drivers,” according to Ruto.

He says there are some circumstances that PEP (post exposure prophylaxis), drugs are administered for victims of rape, fights, those involved in accidents and if a condom break.

“There are cases that we prescribe one to use pep drugs which are given to patients who are at high risk of the HIV virus after circumstances like rape, fights, accidents and also breakage of a condom and it is very advisable that you visit the nearest hospital before 72 hours,” says Ruto.

Ruto further explained that there are situations called partner notifications.
“There is something we call partner notification where one partner tests positive, the other partner is advised even though not voluntarily to get tested together with the kids to be on the safe side and they are given the PREP prescription, (drugs taken for ongoing exposure),” counselled Ruto.

In the line of job, Ruto is faced with some challenges.

“My main challenge is lack of trust especially those testing positives as some think the results were tampered with.” says Ruto.

He advises people living with HIV that it is a manageable condition and that treatment is unavailable, he also said that people should be on the front line to fight against stigmatisation, creates a room for friendship, love themselves and try as much as possible not to infect others.

He is grateful that he is able to spare enough time with his three girls, a boy and a wife as it does not take his leisure time and that the job is able to pay his bills.