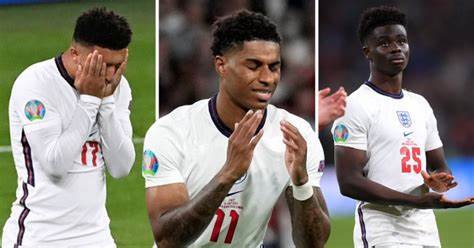 When England overcome Poland 2-0 on October 19, 2013 to qualify for the 2014 World Cup in Brazil, a newspaper in the host country headlined the story “The animals are coming.” It was an expression of disgust of the English raw behaviour that underlies hooliganism.

The headline summed up all that is bad in English football: their uncouth and beastly conduct. Lose or win, the English fan dishes out raw racism.

During the Euro 2020 finals against Italy just over two months ago, their ugly instincts showed up again, but the world once again united in the condemnation of the English White football fans for subjecting Black players in the team to a tirade of racist slurs. They were blamed for the loss against Italy despite their instrumentality in helping England reach the finals and also ensuring the team reached the final.

As England lines up against Hungry on Thursday, the world will be watching more than the match. It would be interesting to see how coach Gareth Southgate will treat Marcus Rashford, Jadon Sancho, Bukayo Saka and Raheem Sterling, among others.

Memories of distraught players huddling in the pitch to give each other support are still. Hours later, a statue of Rashford in his hometown was vandalised. Teenager Bukayo Saka told of the emotional and psychological turmoil he endured, with his parents – of Nigerian origin – the only people around him to see him through the mental tear he had been subjected.

In the countdown to the Thursday match in Budapest, Hungary, a “reformed” racist identified only as Neil, opens up on how he was forced by his daughter to accept other people, particularly Blacks, as humans deserving of the same respect and appreciation Whites demand.

Speaking to the tabloid Metro, Neil paid tribute to his daughter, Millie, for kicking out the animal in him and ushering him into a planet of humanity with varying shades of colour – especially Blacks.

He told the Metro, “I banned my daughter bringing black boys home but one look from her changed that. I’ve got a lot of respect for Millie because she stood up to me.”

When Neil told his daughter not to bring a black man home, he confesses, she shot him a look of disgust. It was at that point that he realised his views were wrong and that he was a racist.

Neil admits to liberally using the N and P-words in everyday conversation and said that he was “basically a bigot.” He would join in with racist and homophobic chants at football games, and said it “normalized” racism in other walks of life.

His daughter Millie struggled with his attitude to people of a different race. She said, “One of the things he used to say was: ‘You can’t have a black boyfriend. Don’t bring a black boy home.’”

“Or we’d walk past people who were selling the Big Issue and it would be: ‘We only buy them from English people, because they can just go home and be homeless there.’”

Neil suggested he used to be casually, rather than overtly, discriminatory. He’s “much closer now” with Millie after she challenged her dad’s behaviour. He said, “I think it was probably seeing the look of disgust on Millie’s face when I made comments.”

Neil was speaking in an interview with the BBC ahead of England’s World Cup qualifier against Hungary on Thursday. It’s their first match since the Euro 2020 final loss to Italy, which was marred by racist abuse of England’s three young black forwards who missed penalties – Jadon Sancho, Marcus Rashford and Bukayo Saka.

Football culture appeared to have a powerful negative impact on Neil, who said he grew up in a small village where only one black family lived. His move aged 16-17 to a town with a “large minority population” came as a “shock to the system”.

He said he “didn’t know how to deal with it so I just went along with what everyone else was doing…I don’t really want to be that sort of role model for her – being a racist, a sexist, a homophobe, basically a bigot isn’t what I want to show Millie when she’s growing up. I try to teach other people, the way that Millie’s taught me.”