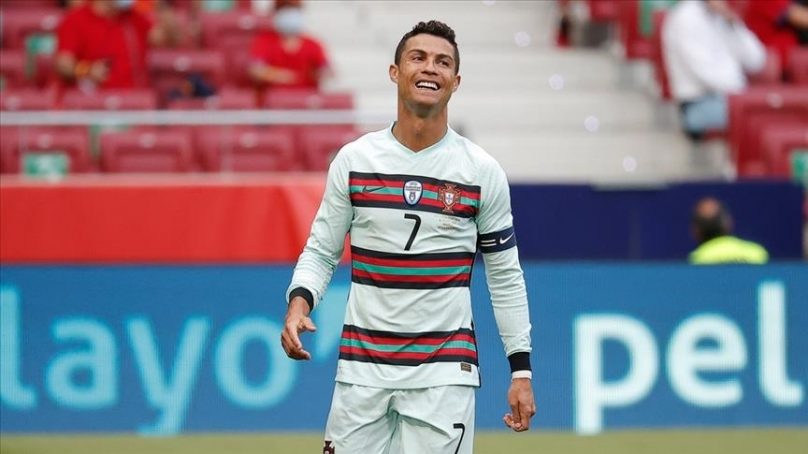 Cristiano Ronaldo believes he could be a Manchester City player “by the weekend” following major developments in the transfer saga, according to reports.

Ronaldo has made it clear to his agent Jorge Mendes that he wants to leave Juventus this summer and not next year when his contract expires. Mendes has been exploring potential suitors and came back to his client with just one, and that is City. They are the only possible destination for him.

As such, Mendes entered into talks with them about making a sensational swoop for the 36-year-old, as confirmed by Fabrizio Romano yesterday.

And now the transfer expert has today revealed that City are “really, really pushing” for a deal. This has Ronaldo thinking a move to the Etihad Stadium could be completed in a matter of days and as soon as this weekend, according to L’Equipe.

It has also been revealed that CR7 has been speaking with his fellow Portugal internationals Ruben Dias, Bernando Silva and Joao Cancelo.

The five-time Balon d’Or has conversed with the Manchester City trio to ask questions about the club and the dressing room. Gazzetta dello Sport reports Mendes arrived in Turin today on a private flight to meet with his client.

The Italian outlet says he immediately made his way to Ronaldo’s home in the hills in what is a significant move. It is clear that Ronaldo to Man City is gaining massive traction. There is not a clear path for the move currently, though.

Transfer expert, journalist Fabrizio Romano reports that despite the pressure mounted by CR7, there is still breakthrough and Man City s reluctant to pay the amount of money Juventus is demanding.

Romano posted on his Twitter handle, “[City manager] Pep Guardiola has been so clear with Manchester City: He’d like to keep Gabriel Jesus as part of the team, also people close to Brazilian striker are firmly convinced that Gabriel will stay. He (Guardiola) is currently not involved in Cristiano Ronaldo talks with Mendes/Juventus.”

The transfer expert says attempt by Ronaldo’s agent to interest Paris Sant Germain in the transfer yielded no response.

“Cristiano Ronaldo’s agent Mendes is in Torino. He’s looking for options for Ronaldo. PSG are not interested. [Then] Mendes approached Manchester City to sign Ronaldo, but still no bid. Juventus want €30 million ($35 million). However, Man City have no intention of paying any fee and want to keep Gabriel Jesus,” according to Romano.

The reigning Premier League champions do not want to pay a fee, which Juventus are demanding. And they also want him to lower his wage demands. Harry Kane is now completely out of the equation. Their focus therefore is solely on procuring one of football’s greatest ever talents.

Juventus remain assured that they will not lose their prized asset this summer despite the significant speculation about his departure. He was placed on the bench for their first game of the season at the weekend. But club vice-president Pavel Nedved insisted it meant nothing.

“We mustn’t try to create sensational stories where there aren’t any,” said Nedved. “It was a decision shared with the player. At the start of the season, naturally he is not at top fitness. The coach is trying to use the best line-up at this moment. I can absolutely confirm Ronaldo will remain at Juventus this season.”