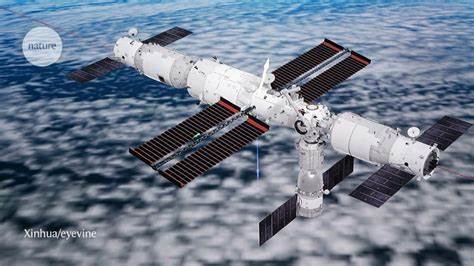 China has had a bumper few years in space exploration, and its ambitions are about to get bolder. The China National Space Administration has released an overview of its plans for the next five years, which include launching a robotic craft to an asteroid, building a space telescope to rival the Hubble and laying the foundations for a space-based gravitational-wave detector.

The missions were highlighted in a white paper, ‘China’s Space Programme: A 2021 Perspective’, released last month. The plans continue the country’s trend in emphasising missions with science at their heart, rather than technology development and applications, says Shuang-Nan Zhang, an astronomer at the Institute of High Energy Physics in Beijing.

“This is a very good sign,” he says. “It’s a continuous increase in investment in exploration of the Universe.”

China aims to launch asteroid probes to sample near-Earth asteroids and study icy comets that have asteroid-like orbits. The mission, which will probably be named ZhengHe after a Ming-dynasty Chinese explorer, would be the country’s first to visit an asteroid, and could launch as soon as 2024. It will follow in the wake of Japan’s successful Hayabusa asteroid missions and NASA’s OSIRIS-Rex, which is due to return space rocks to Earth next year.

ZhengHe will fly for 10 years, first landing on an ancient asteroid known as HO3 or Kamo‘oalewa, which loops around Earth as a quasi-satellite. Scientists hope that studying it will give them an insight into conditions in the early Solar System.

ZhengHe will anchor itself on the asteroid before scooping up its sample, according to a correspondence published in Nature Astronomy last year. ZhengHe will return to Earth’s orbit in 2026 to drop off its spoils, which will parachute to the ground. The craft will then sling-shot around Earth and Mars and travel to comet 311P/PANSTARRS in deep space.

Not content with returning the first lunar samples to Earth since the 1970s, China approved three more lunar missions in December, all focusing on the Moon’s south pole, where the country is considering building a lunar base.

Chang’e-7, set to launch in 2024, will carry out a detailed survey of the Moon’s south pole, including mapping the distribution of ice in its shadowy craters. Chang’e-6 will follow, aiming to bring back polar soil samples. The ice is a treasure trove for scientists, who can use it to study the Moon’s history and for prospectors, who hope to use it as rocket fuel and to supply lunar bases.

Work will also begin on Chang’e-8, which is not scheduled to fly until 2030; this will test “core technologies” for a crewed international lunar research station – the focus of China’s lunar programme beyond 2025. Russia and China will sign an intergovernmental agreement on building a research base together “as soon as possible this year”, said Wu Yanhua, vice-administrator of the China National Space Administration (CNSA), at the press conference to launch the white paper. He stressed, however, that the venture was open to all nations.

Wu added that China wants to broaden and deepen international collaboration, including on lunar exploration; on China’s space station, Tiangong, which is under construction; and on planetary exploration.

China made its first leap into interplanetary space with the Tianwen-1 orbiter, which dropped a lander containing the Zhurong rover on Mars in May. According to the white paper, China will complete research for sending a craft to Mars to sample rocks and return them to Earth. This mission could launch in 2028.

NASA’s Perseverance rover collected the first Mars rocks in 2021. The agency hopes to bring them back to Earth as part of a joint mission with the European Space Agency (ESA), launching in 2026.

The white paper also lays out China’s plans to eventually probe further into the solar system. The next five years will see the completion of key research for a mission to explore Jupiter and its ocean-filled moon system. Press reports suggest that this mission could launch as early as 2029 — meaning that it would join ESA’s JUICE and NASA’s Europa Clipper mission, scheduled to fly in 2023 and 2024. “Deep space is certainly another area China sees there are a lot of opportunities for scientific breakthroughs,” says Zhang.

The country has also set its sights on exploring the boundary of the Solar System. China’s funding agencies have yet to confirm this, or the Jupiter mission, but “a mention in the plan is certainly helpful”, says Zhan Hu, an astronomer at the National Astronomical Observatories in Beijing.

China also plans to launch a space telescope called Xuntian, whose name means ‘survey the heavens’. This will image in the same wavelengths — ultraviolet, visible and infrared — as those used by NASA’s Hubble Space Telescope.

Slightly smaller than Hubble, Xuntian will not quite match its predecessor’s resolution; but, at any one time, Xuntian will capture a patch of sky 300 times larger. That will allow it to probe a much greater volume of the Universe than Hubble, says Zhan, who works on Xuntian.

Most of Xuntian’s first 10 years will be devoted to understanding the history and evolution of the Universe through a wide survey of the sky. The telescope will periodically dock with China’s space station, Tiangong, for refuelling and maintenance. Zhan says that the team plans to deliver the telescope by the end of 2023, ready for launch in 2024. “The schedule is very tight,” he says.

China wants to further develop plans to launch a space-based gravitational-wave detector, called Taiji, in the early 2030s. If launched then, it would be the first of its kind. Such a mission would observe lower-frequency waves than those seen by ground-based detectors such as Advanced LIGO, allowing it to detect higher-mass black holes, including those in the early Universe.

But the experiment would be complex: spotting ripples in space-time will mean detecting shifts of just a few trillionths of a metre in the distances between three spacecraft, positioned three million kilometres apart from each other in the shape of a triangle.

An initial pilot satellite, called Taiji-1, completed its mission successfully in 2019, and researchers now hope to fly a two-satellite mission in 2024–25 to test the necessary precision technologies. This will “remove all the technical obstacles” for the ultimate Taiji mission, says Yue-Liang Wu, a physicist at the University of the Chinese Academy of Sciences in Beijing.

ESA has long planned its own gravitational-wave observatory, LISA, and has already flown a successful pathfinder. But LISA is not scheduled to launch until 2037. Together, the two networks could be used to measure the Hubble constant, which describes the expansion of the Universe, with much greater accuracy than ground-based detectors can, say researchers behind the mission.