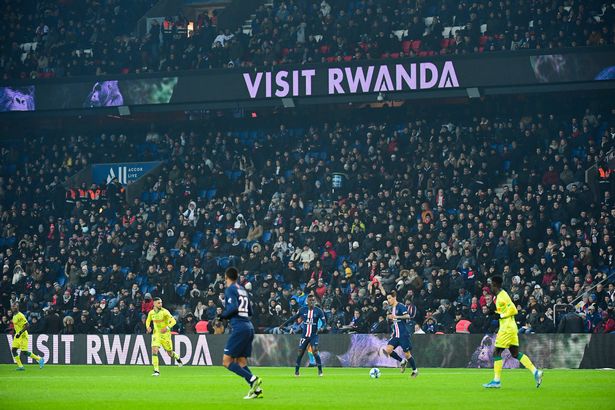 Watch any match involving Arsenal or Paris Saint-Germain and the message is impossible to miss. Emblazoned on shirtsleeves, on training equipment and, during home matches, on the advertising boards surrounding the pitch.

This is the exposure that a £10 million-per-year sponsorship agreement guarantees the Rwandan government with football’s wealthiest clubs to promote their tourist board’s message: Visit Rwanda.

Rwanda is, by any measure, one of the 20 poorest nations in the world yet its authoritarian President Paul Kagame – who has ruled since 2000 and was re-elected in 2017 with a 99 per cent share of the vote – sanctioned a huge outpouring of government funds into sponsorship agreements with billionaire-owned football clubs.

Kagame is a fervent supporter of Arsenal and gained a degree of widespread recognition after a series of angry tweets after the Gunners lost at Brentford on the opening day of the Premier League season, claiming that fans of the club “do not deserve” this and blasted the side’s “mediocrity”.

Yet behind this relatable image of fandom and exposure of Rwanda – undoubtedly a beautiful country to visit – and its tourist potential, there is a darker side to the sponsorship.

Kagame is a former guerrilla leader who has been praised for bringing stability and growth to Rwanda after its civil war and genocide in the first half of the 1990s, but now oversees a nation where – according to Human Rights Watch – public life is marked by “threats, intimidation [and] mysterious disappearances of critics.

The British Foreign Office has urged the East African nation to investigate allegations of “deaths in custody, enforced disappearances and torture” which has been overseen by its government.

In 2020, Paul Rusesabagina – a former hotelier whose peaceful actions during Rwanda’s genocide helped keep safe over 1,000 Hutu and Tutsi refugees, inspiring the Hollywood film Hotel Rwanda – boarded a plane in Dubai, believing he was en route to Burundi.

The plane instead flew to the Rwandan capital Kigali, with Kagame’s government claiming they held “an international warrant” for his arrest on nine charges of terrorism that related to his association with the FLN (National Liberation Front) – allegations that the 67-year-old and his family have always staunchly denied.

Human rights advocates stated that they believed the charges were politically motivated due to Rusesabagina’s open criticism of President Kagame with Human Rights Watch voicing their concern at Rusesabagina being “forcibly disappeared” and not facing a fair trial.

In September 2021, Rusesabagina – along with 20 others – was found guilty of terrorism-related charges and handed a 25-year prison sentence.

The Clooney Foundation for Justice described the verdict as a “show trial,” citing that Rusesabagina’s conviction lacked sufficient guarantees of fairness “required by international and African standards.”

Rusesabagina’s daughter Carine Kanimba, a US-Belgian dual citizen, has been leading her family’s effort to free her father from prison and she has called on Arsenal and PSG, who have taken funds from the Rwandan government via their Visit Rwanda sponsorship deals, to denounce the actions of the regime.

The term “sportswashing” – defined as “where sport is used as a tool to legitimise or improve the reputation of an individual, group, corporation or nation-state” – is often associated with wealthy nations via sports sponsorship, influence or hosting events.

The majority of Rwandans live in poverty, but there is international concern regarding authoritarian actions of its government and how in recent years, it is starting to launder its reputation through sport.

This starts with their multi-million sponsorship deals with Arsenal and PSG.

“This is exactly what Rwanda is doing,” Kanimba explained to Mirror Football. “The Visit Rwanda sponsorship is intended to hide human rights abuses and to make it look like a happy country, when it is not – its people are repressed.

“The Rwandan government is facing greater international criticism and investigations for its long-term pattern of human rights abuses and they know this is coming out all over the world.

“The way to divert attention away from that negative press is by talking about sports because they know that people like them and engage with them.

“Arsenal and PSG are risking their proud histories and reputation by associating with, and taking money from, a dictatorial regime who do not respect freedom of speech or the due process of law, and where human rights are systematically violated.”

Kanimba believes that the Rwandan government’s move into sponsorship is deflecting attention away from the concern and “pretending that everything is ok” in a move that ultimately “victimises more people.”

Since striking the initial agreement in 2018, Arsenal have visited the East African country on a number of occasions, with former defender David Luiz filming promotional content the following year.

Luiz posed for photos with the nation’s mountain gorillas before taking time to visit President Kagame with personalised Gunners shirts.

The Brazilian said, “I’m going to recommend all my friends to spend their holidays in Rwanda.”

Rusesabagina’s contact with his family is conducted through monitored five-minute weekly phone calls, in which the topics of conversation are limited.

“This is the only contact we have with him and while we are very happy to briefly hear his voice, those calls are frightening,” admitted Kanimba.

“They are very scary because we can hear that he is being pressured when he starts to talk and when we start giving him information about his case – such as different parliaments discussing Magnitsky Sanctions on his behalf – they take the phone away from him, as they do not want him to have that information.

“We are grateful for those five minutes, but they are also very painful.”

Kanimba speaks candidly about her father’s torture and gut-wrenching experience behind bars, but she and her family are not about to give up hope on his future.