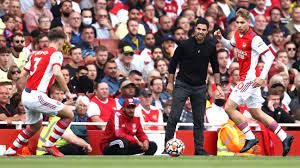 Arsenal boss Mikel Arteta was overjoyed to see the Gunners finally get on the board with their first Premier League points of 2021-22 and saluted the hard work his team had carried out over the international break.

Three consecutive defeats without scoring a single goal had increased the pressure on Arteta going into Saturday’s clash with Norwich City, but the Gunners responded in fine fashion as a 1-0 victory brought that awful run to an end. The Gunner’s manager has claimed the turnaround marks one of his favourite football moments.

“I must say it has probably been the best 10-14 days I have ever had since I’ve been in football,” Arteta told reporters after the game.

“You have to win football matches but it is a joy to watch how everyone was behaving around the context that we had around. I got pretty emotional to see that. I think it is pretty difficult to see football and people maybe were expecting something, they want to go another road – try to transmit hate or whatever – it wasn’t the case at all. So, thank you so much.”

Pierre-Emerick Aubameyang was the man who finally broke Arsenal’s scoring duck with the game’s only goal 66 minutes in.

And he echoed Arteta’s relief in banishing the memories of their horrendous opening run.

“I’m just really happy. The first three points of the season. It was tough weeks so we had to make sure we won this game in front of our fans. The most important thing today was to play with pride and that’s what we did,” he told BBC Sport.

“[The start] was really hard. When you lose games as players, we are the first to be touched inside. We had 10 days to prepare ourselves and to change things and this is what we did. Today we made sure we won this game and took three points.

“Overall, we played well. We had a lot of chances. We have to be a bit more clinical in front of goal but everyone gave everything on the pitch.”