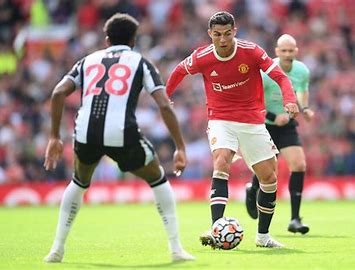 Cristiano Ronaldo was reportedly so nervous about his return to Manchester United that he did not even do an initiation song. Instead, the five-time Ballon d’Or winner made a speech to the squad stressing just how ‘absolutely ecstatic’ he was to be back.

The 36-year-old rejected a move to rivals City before the transfer window slammed shut to end a 12-year absence from the Red Devils. In true Ronaldo style, the Portugal captain marked his first game for the club since leaving in 2009 by scoring twice during a 4-1 demolition of Newcastle.

A consummate professional off the pitch, the former Real Madrid and Juventus marksman has dedicated his life to his profession in order to eke out every drop of talent possible.

Despite lifting multiple Champions League trophies, Lee Grant told TalkSPORT the veteran striker skipped the traditional rituals for new signings to profess his love for the club. He revealed on Darren Bent’s Boot Room: “Everyone will know, whenever anyone gets up, it’s normally like ‘Here is a spoon, get on a stool or a chair and sing.’

“And I was one of the first ones because I am one of the older players so straight away, I am rattling the glasses to try and see.

“We had Rafa, Jadon had to do his little piece and obviously Cristiano. We were all sort of on tenterhooks thinking if he was going to get up and sing.

“But he got up, he was brilliant, obviously I am not going to disclose the contents of what he said, but it was interesting that that was one of the points that he made about his nerves.

“He reiterated it post-match, so really interesting. But what I think that it does show, and something we are all aware as players, is that he really wants to be back here.

“He was incredibly excited at the opportunity to come back and play for the club so that’s incredibly humbling for Manchester United fans and anyone connected to the club. He is this global megastar that is absolutely ecstatic to be back.”

In fact, such has been his impact already, Grant revealed member of the squad refused to indulge in any treats before the Newcastle game at Old Trafford for fear of being judged.

“To give you one instance of the impact he is having on the group right,” Grant added. “This was Friday night in the group hotel.

“So, as you guys will be aware, you finish your dinner and usually on a Friday night you’ve got a few cheats stuff out. You’ve got some apple crumble or you’ve got a bit of brownie and cream or what not.

“I tell you now, not one player touched the apple crumble and custard, not one player went up for that brownie because everybody was sat down and one of the lads said to me, ‘What has Cristiano got on his plate?’”