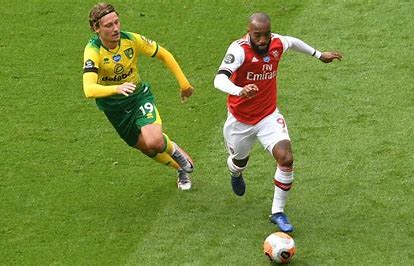 Former Gunners star Paul Merson feels the Arsenal players deserve to be knighted if they can achieve the ambitions set out by Martin Odegaard.

The north Londoners picked up their first points of the new season at the fourth attempt on Saturday. Pierre-Emerick Aubameyang’s second-half goal was enough to secure a 1-0 victory over Norwich City at the Emirates. It leaves Arsenal 16th on the table and eases the pressure on beleaguered manager Mikel Arteta.

Odegaard penned permanent terms at the club in the summer after spending the second half of last season on loan. The 22-year-old has made two top-flight starts in 2021-2022 after playing 14 times last term. Despite the club’s recent woes, the Norway international remains positive about the future.

“Then hopefully with time, win trophies, Champions League and hopefully win the league within a couple of years.”

That timetable for glory seems highly unlikely to happen and Merson was quick to bring the player and Arsenal down to earth.

“No, no. I think you have to start taking small steps. It has to be steady progress,” he told Sky Sports News. “I think the players they have brought in are younger players – Arsenal were building a team around Smith Rowe three weeks ago and he’s out of the team now.

“If they can get into the top four within the next two years then they won’t be far off the Queen putting the sword on their shoulders. They will be getting honoured.”

It has been tough few weeks for Arteta, with question marks over his future. And after the Canaries triumph, he revealed the lift he has received.

“After three defeats things get complicated. I must say it has been the best 10 or 14 days in my professional career,” he said. “Not the easiest, but the best. You learn a lot in difficult moments, who you are with. In difficult moments when you see the people and the level of organisation and the fans we have.”

And the Spaniard went on to say: “I had question marks to be honest, but I just saw incredible fans trying to inspire a team, trying to tell them we are ready to suffer with you and we are going to support you.”