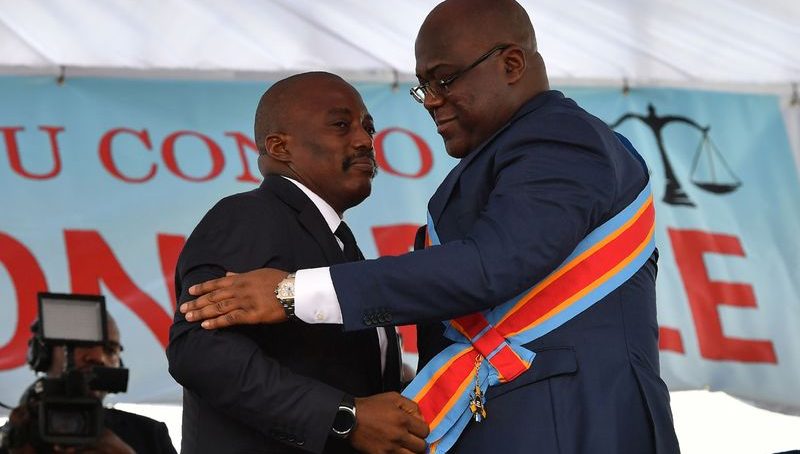 A leak of 3.5 million documents shows how a Chinese-run company moved millions of dollars to former Congo President Joseph Kabila’s family and allies. The Chinese businessman had walked out of a bank in Kinshasa with 13,624 hundred-dollar bills, 10,001 fifties and 43,000 smaller US notes, despite explicit instructions to prevent it from happening.

“The account has finally been emptied,” Yvon Douhore, head of an in-house audit team in the capital of the Democratic Republic of Congo, wrote in an email that day, July 5, 2018, after noticing the withdrawal. “I’m at a loss for words,” a colleague replied the next day.

The slip showing the final withdrawal from CCC’s accounts in 66,625 US bills worth more than $2.5 million.

The previous month, Groupe BGFIBank’s compliance department in Congo had frozen accounts held by the businessman’s firm, Congo Construction Co or CCC, because the client file was missing key documents, according to bank records.

A history of transactions reviewed by Bloomberg News as part of the biggest leak of financial information from Africa showed an even bigger issue: its political connections.

Over a five-year period, tens of millions of dollars flowed through CCC’s accounts to people and companies closely associated with Congo’s then-president, Joseph Kabila, all at a bank partly owned by his sister and run by his brother, Selemani Francis Mtwale.

But a series of scandals had forced the lender’s parent company in Gabon to reconsider its embrace of the presidential family. It removed Selemani as chief executive officer in May 2018 and then reclaimed a 40 per cent stake held by Kabila’s sister, which it said she’d never paid for.

Douhore’s colleagues blocked the accounts while he conducted an autopsy of Selemani’s tenure. Yet someone at the bank was still authorising transactions, right through to the final $2.5 million cash withdrawal in July 2018.

The documents hint at why: Douhore was witnessing the closing act of CCC’s secret role as an intermediary between Chinese mining groups and the Kabila clan.

For more than six months, Bloomberg has analysed a trove of 3.5 million bank documents from BGFI that offer an unprecedented glimpse into how several individuals and companies operated in what would turn out to be a takeover of much of the Congolese mining industry by Chinese companies during Kabila’s presidency.

The information was obtained by Paris-based anti-corruption group Platform to Protect Whistleblowers in Africa and the French news organisation Mediapart and shared with media outlets coordinated by the European Investigative Collaborations network and five non-governmental organisations.

The consortium’s investigations, dubbed “Congo Hold-up,” demonstrate the extent to which the country’s most powerful family used the bank to serve its private interests and how at least $138 million in state funds transited BGFI to Kabila’s relatives and associates.

The new information also casts a light on some of the previously unseen ways in which Chinese companies came to dominate the mineral riches of one of the poorest nations in the world.

The Sentry, a Washington-based anti-corruption group, used the banking data to write a report about the Kabila family’s financial ties to Chinese mining companies. Bloomberg was given access to the organisation’s documents and findings before the report’s release.

Over the course of several months, Bloomberg independently obtained additional documents and spoke with dozens of people on five continents to confirm and complement the information.

In a statement posted on its website on November 23, after the first consortium stories appeared, BGFI said that while it decried the leak and questioned the authenticity of the documents, it “strongly condemns acts contrary to law and ethics that may have been committed in the past within its BGFIBank RDC SA subsidiary and of which its employees could possibly have been perpetrators or complicit.”

The bank added that it had restructured its ownership of the Congo unit in 2018, conducted an internal audit to identify methods that may have been used to circumvent controls, put in new management and filed a complaint with the prosecutor’s office to determine who was responsible for the alleged acts and sanction them.

This isn’t the first time BGFI has been at the centre of corruption allegations in Congo. Five years ago, a former compliance officer shared thousands of bank documents with media outlets including Bloomberg that showed how Selemani had directed millions of dollars in public funds to the bank and a company owned by some of Kabila’s closest allies. The new leak of documents shows that was only part of the story.

After replacing his assassinated father in 2001 and negotiating an end to a brutal civil war, Kabila opened the country’s vast reserves of copper and cobalt to international investors. Western firms, initially enthusiastic about Kabila’s Congo, have since beat a steady retreat. BHP Group, Anglo American Plc’s De Beers and Freeport-McMoRan Inc. have all sold mines or abandoned projects.

Those that stayed often formed high-risk partnerships that are now the subject of corruption probes, including one by the US Department of Justice into Glencore Plc and two others by the UK’s Serious Fraud Office into Glencore and Eurasian Natural Resources Corp.

That’s increasingly left the field to companies from China eager to expand their control over the supply of two metals that are mined together in Congo and are at the heart of the nascent revolution in electric vehicles.

In less than a decade, Chinese companies have gone from minor contributors to accounting for half of Congo’s cobalt output and about 70 per cent of its copper production, according to Congo’s main business lobby.

The centrepiece of this transformation is a $6.2 billion minerals-for-infrastructure deal, the biggest investment in Congo’s history, spearheaded by China Railway Group Ltd and Power Construction Corp of China, known as Powerchina.

In 2008, the two countries agreed that the Chinese companies would finance $3 billion worth of infrastructure and build a $3.2 billion copper and cobalt project known as Sicomines, whose tax-free profits would repay both investments. Supporters hailed it as a proud symbol of China’s new “win-win” model of development financing, an alternative to the strict conditions attached to lending from the Western-dominated World Bank and International Monetary Fund.

An open-pit copper-cobalt mine operated by Sicomines, part of Congo’s $6.2 billion minerals-for-infrastructure project with China, just outside Kolwezi in November 2019.

Omicron threat: Scientists urge patience as they investigate ‘This variant (that) is completely insane’