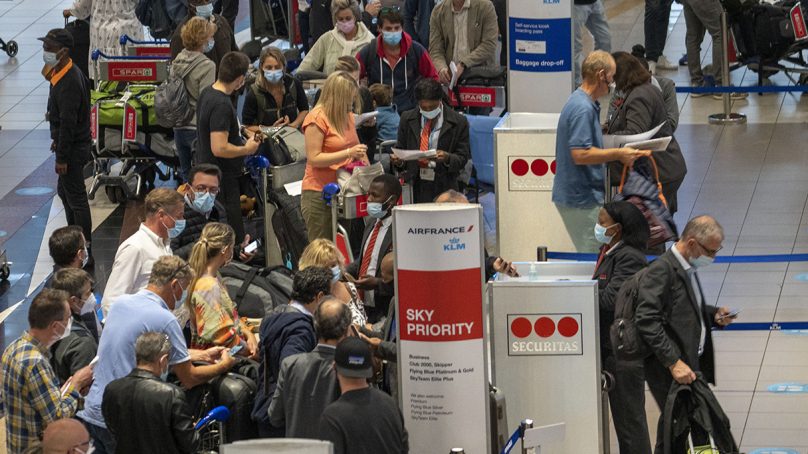 Omicron threat: Scientists urge patience as they investigate ‘This variant (that) is completely insane’

At 7:30 am on November 24, Kristian Andersen, an infectious disease researcher at Scripps Research, received a message on Slack: “This variant is completely insane.”

Andrew Rambaut of the University of Edinburgh was reacting to a new SARS-CoV-2 genome sequence found in three samples collected in Botswana on November 11 and one picked up a week later in a traveller from South Africa to Hong Kong.

Andersen looked at the data and then replied, “Holy shit – that is quite something. The length of that branch …” A few minutes later he added: “Just had a look at the list of mutations – so nuts.”

They were talking about what is now called Omicron, a new variant of concern, and the long branch Andersen noticed refers to its distance to every other known virus on SARS-CoV-2’s evolutionary tree. The variant seemed to have picked up dozens of mutations, many of them known to be important in evading immunity or increasing transmissibility, with no intermediate sequences in the database of millions of viral genomes.

On November 23, after spotting the odd sequences in a global database, Tom Peacock, a virologist at Imperial College London, had already posted his own verdict on GitHub: “This could be of real concern.”

Now, once again, the world is watching as researchers work nights and weekends to learn what a new variant has in store for humanity. Is Omicron more infectious? More deadly? Is it better at reinfecting recovered people? How well does it evade vaccine-induced immunity? And where did it come from? Finding out will take time, warns Jeremy Farrar, head of the Wellcome Trust: “I’m afraid patience is crucial.”

Researchers in South Africa were already on the trail of this new variant. Several teams were independently trying to figure out why cases were spiking in Gauteng, a northern province that includes Johannesburg and Pretoria.

And a private lab called Lancet had noticed that routine polymerase chain reaction (PCR) tests for SARS-CoV-2 were failing to detect a key target, the S gene, in many samples, a phenomenon previously seen with Alpha, another variant of concern.

When Lancet sequenced eight of these viruses, they found out why: The genome was so heavily mutated that the test missed the gene.

Lancet shared the genomes with the Network for Genomics Surveillance in South Africa (NGS-SA), which called an urgent meeting on November 23.

“We were shocked by the number of mutations,” says Tulio de Oliveira, a virologist at the University of KwaZulu-Natal and NGS-SA’s principal investigator. After the meeting, de Oliveira says, he called South Africa’s director general of health and “asked him to inform the minister and president that a potential new variant was emerging.”

The team sequenced another 100 randomly selected sequences from Gauteng in the next 24 hours. All showed the same pattern. After informing the government, de Oliveira and his colleagues presented their evidence at a press conference on the morning of November 25.

On November 26, the World Health Organization (WHO) designated the virus a “variant of concern” and christened it Omicron. (Variant names follow the Greek alphabet but WHO skipped the letters Nu and Xi, it said, “because Nu is too easily confounded with ‘new’ and Xi was not used because it is a common surname.”)

One reason for concern about Omicron is that sequenced samples indicate it has rapidly replaced other variants in South Africa. But that picture might be skewed. For one, sequencing might have been focused on possible cases of the new variant in recent days, which could make it appear more frequent than it is.

PCR data provide broader coverage and a less biased view, but there, too, samples with the S gene failure indicate a rapid rise of Omicron.

But the rising frequency could still be due in part to chance. In San Diego, a series of superspreading events at a university resulted in an explosion of one particular strain of SARS-CoV-2 earlier this year, Andersen says: “It was thousands of cases and they were all the same virus.”

But the virus wasn’t notably more infectious. South Africa has seen relatively few cases recently, so a series of superspreading events could have led to the rapid increase of Omicron. “I suspect that a lot of that signal is explained by that and I desperately hope so,” Andersen says.

Based on a comparison of different Omicron genomes, Andersen estimates the virus emerged sometime around late September or early October, which suggests it might be spreading more slowly than it appears to have.

The other reason to be concerned is Omicron’s confusing genome. Its spike protein, which latches on to cells on human receptors, has 30 amino acid differences from that of the original Wuhan, China, virus. In addition, amino acids have disappeared in three places and new ones appeared in one place.

Other proteins, too, have undergone changes.

Many of the changes in spike are around the receptor-binding domain, the part of the protein that makes contact with the human cell. “That is very troubling,” Farrar says. Structural biology mapping last year showed some of these changes made the virus bind to the receptor much better.

It’s hard to tell how infectious a virus is based on mutations alone, says Aris Katzourakis, an evolutionary biologist at the University of Oxford. “But if we were looking out for mutations that do affect transmissibility, it’s got all of them,” he says.

The sequence also suggests the virus could excel at evading human antibodies, says Jesse Bloom, an evolutionary biologist at the Fred Hutchinson Cancer Research Center. The human immune system produces a host of different antibodies that can neutralise SARS-CoV-2, but many of the most important ones fall into three categories that each target a slightly different site on the spike protein of the virus, simply called 1, 2 and 3.

Bloom thinks people who recovered from Covid-19 or were vaccinated are unlikely to completely lose their ability to neutralize the virus. “But I would expect, based on this particular combination of mutations, that the drop in neutralization is larger than for all the other major variants.”

Experiments in the laboratory will have to show whether he is right. Alex Sigal, an infectious disease researcher at the Africa Health Research Institute, says he received swabs with Omicron on November 24 and has started to grow the virus. Producing enough of it to test against sera from vaccinated and recovered individuals will take a week or two, he says. Other researchers will test viruses genetically engineered to carry just the spike protein of Omicron, a process that is faster than growing the variant itself, but a bit further removed from what happens in real life.

As such studies take place, it’s crucial to closely monitor any shifts in the pandemic, Farrar says. “Do you see cases increasing not just in South Africa, but the broader South African region?” The virus has already been picked up in Belgium, the United Kingdom, and Israel, Farrar points out, and will probably be found elsewhere as well.

“Do you see transmission increasing in other parts of the world around presumed index cases?” Epidemiologists will also watch for changes in disease severity – how many people are hospitalised and die. All that will take time.

In the meantime, the European Union, the United States and many other countries have restricted travel to and from southern Africa in a bid to protect themselves. Travel restrictions are unlikely to stop the variant, Farrar says, but they can buy some time. “The question is what you then do with the time.”

Travel restrictions come with an economic and social cost, which could be a disincentive to report new variants. “I’ve heard through the grapevine that countries didn’t push sequences out very quickly [in the past] because they were worried about travel bans,” says Emma Hodcroft, a virologist at the University of Bern. “This is the opposite of what we want.”

Such considerations did not stop South African researchers, de Oliveira says. “We do risk a massive backlash in case [Omicron] does not cause a massive wave of infection and can be controlled,” he wrote in a message. “But this is a risk that I am comfortable to live with as the pandemic has caused so many deaths and suffering. [Our] hope is that our early identification will help the world.”