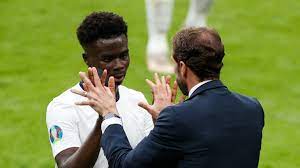 English national team players of African descent often endure all manner of racial abuse – be it by fans, media or even teammates. However, Saka – whose both parents are Nigerian – has defied the odds to light up the football world in England after he made the squad that outlasted Denmark 2-1 to reach the finals of any major competition in 55 years. The last time England cruised past the semi-finals was in 1966 World Cup in London.

Just before halftime, the scintillating Saka received a neat pass from striking partner Harry Kane and cut in from the right and sent in a delicious cross for the on-rushing Raheem Sterling whose pressure on Denmark defence resulted in an own goal.

Saka who missed the quarter final through injury is now the talk of England and the colour of his skin has been set aside; his skills and determination hailed as “patriotic” and “real” English.” His Nigerian descent doesn’t count. He is English.

Gary Neville and Ian Wright were left hailing Saka after the Arsenal man was included in England’s squad to face Denmark. The young winger was handed another start by Gareth Southgate at Wembley Stadium for the Three Lions’ semi-final meeting.

According to Opta, his selection meant that he became the youngest-ever player to start for England in the semi-finals or later of a major tournament.

Despite his age, both Wright and Neville have insisted that Southgate’s faith in the Arsenal utility man is well deserved due to his eye-catching appearances for his club.

Interviewed by ITV, former Gunner Wright said, “We’re talking about someone that joined Arsenal’s academy at age seven. He’s progressed through, he’s always been somebody that’s played at a higher level. He’s played for England since he was 16, he’s played at every level. He’s not just arrived here, he’s somebody that was destined to do what he’s doing right now. That’s why everyone at Arsenal knows what he’s capable of, and we’re seeing it right now.”

Neville on Saka, “It’s a massive achievement, but I think it’s typical of Gareth’s reign, where he’s ripped up the rule book.”

Meanwhile, having also caught the eye for the Three Lions previously in the tournament, Neville was also pleased that Saka was selected from the start.

In recognition of the outstanding performance by Saka since the European Championship tournament got underway nearly a month ago, Southgate told ITV in an interview after the semi-final match: “I’ve just had to tell Bukayo Saka and Jude Bellingham it doesn’t normally work like this!”

“I’m so proud of the players. It’s an incredible occasion to be a part of, the fans were incredible all night. It wasn’t going to be straightforward. The game the other night in Rome was, but we told the players that they would have to show resilience and come back from some setbacks, and we did that tonight.

“When you have waited as long as we have to get through a semi-final, given the limited amount of international experience some of the players have, they have done an incredible job.