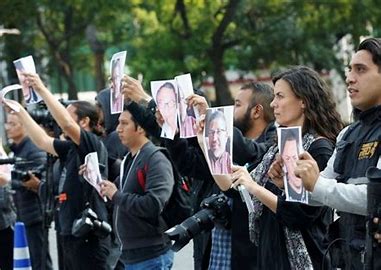 A new media study rates Mexico as the worst country on the planet for journalists to operate as freedom of expression and the right to truth is compromised by state agencies by way of lax implementation of existing laws to shield media practitioners and owners against crime lords.

The report undertaken jointly by the International Federations of Journalists (IFJ), Committee to Protect Journalists, Freedom of the Press Unlimited, among others was made public early this week. The study highlights suppression of press freedom by the state and the criminal underworld, which also plays a role in determining political leadership.

The report says, “The threats, harassment and intimidation journalists face also affect their children, partners and parents both as a result of the violence itself and when investigations are subsequently carried out.”

The report ranks Mexico as one of the most high-risk countries for journalism, “a place where denouncing organised crime costs people their lives. Journalists there are harassed, threatened, ‘disappeared’ and murdered.”

The Central American nation is designated a conduit for drug trafficking – particularly cocaine and heroin – and a haven for money launderers. Ironically, most of the narcotics are sold in the USA and Europe, which have been on the forefront to hem in the vice that has taken root in Africa, China and other parts of Asia.

According to IFJ findings, “The wave of violence, especially against journalists, permeates the lives of people at all socio-economic levels. This report shows the impact that this violence has on the personal experiences of families of murdered and ‘disappeared’ journalists, and reveals the lack of support they face.”

It also advocates for effective public policies for the state to protect, inform and aid victims.

The report comes barely two months after the Committee to Protect Journalists and Freedom of the Press Unlimited called for fresh investigations into the murder of journalist Regina Martínez. Regina was murdered in the Mexican state of Veracruz in 2012, when Veracruz was at the centre of Mexico’s many drug wars. After the murder, the Veracruz state prosecutor’s office investigated the case, leading to the arrest and conviction of a suspect. The journalist fearlessly laid bare the activities of the criminal underworld leading to her killing.

The CPJ report documents a series of serious anomalies in the official investigation conducted by government agencies.

Specifically, the report finds that murder suspects are convicted on the basis of a confession that was obtained under torture. Furthermore, the report presents several witness statements that severely challenge the official murder theory.

“Killing a journalist is the world’s safest crime: in nine out of ten cases the killer goes free. To break the cycle of impunity, Mexican authorities must step up their efforts to ensure justice for Regina Martínez…Mexico has long been one of the most dangerous places for journalists to work. Mexican authorities must do their utmost to address impunity and bring those who kill journalists to book,” the organisations demand.

According to IFJ, the situation does not get better for journalists as employers and law enforcers leave them at the mercy of the criminal underworld and oppressive state functionaries.

IFJ reports, “Labour standards in the ﬁeld of journalism do not recognise employees’ rights to social security beneﬁts, which, in turn, affects the rights of their children and families. The lax implementation of laws meant to protect victims affected by the murder or disappearance of journalists mainly infringes on the rights to truth, justice and full redress.”

The situation worsened following a reduction in public funding for victims as well as public policy that “is susceptible to corruption and that allows crimes to be committed with impunity weaken the commitments Mexico has made in international treaties.”

Mexico sees to only some of the needs of the families of murdered and disappeared journalists, and individual and collective support networks are scarce.

The report is a result of a project developed by Griselda Triana with a grant from the Resilience Fund and input from IFJ, CPJ and FPU.