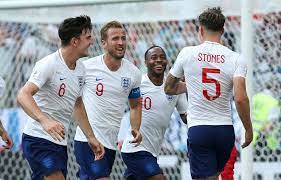 The England team of 2021 is one that simply would not exist if Priti Patel had been in charge of the Home Office a generation ago.

Minutes after the full-time whistle blew in Rome on July 3, concluding England’s 4-0 victory over Ukraine in the quarter-finals of the European Championships, the Home Secretary Priti Patel tweeted her congratulations.

“What a performance. What a team. It’s coming home!” she wrote. The irony of the sentiment was not lost on many.

For one thing, Patel had been curiously forthright in her criticism of the England team ahead of the tournament. In an interview with the incel vanity project GB News, Patel refused to criticise fans who booed England for taking the knee before games to protest against racial injustice. Instead, she derided the players for engaging in “gesture politics.”

Bizarrely, she went on to conflate the entirely peaceable act of taking the knee with the toppling of the statue of the slave trader Edward Colston in Bristol last summer.

“I just don’t subscribe to this view that we should be rewriting our history,” she said, deploying a tactic used by many politicians on the far right to cast even the mildest progressive tendencies as essentially indistinguishable from violent extremism.

But the wider irony is that the England team of 2021 is one that simply would not exist if Patel had been in charge of the Home Office a generation ago. After England’s historic 2-0 win over Germany at Wembley in the last-16 on June 29, a viral social media post from the Migration Museum in London, accompanied by a poster campaign, sought to underline the impact of immigration on English football.

It depicted England’s starting XI from the game, but with the names of all the players of foreign ancestry – with either a parent or grandparent born abroad – crossed out. Just three remained: the defenders Luke Shaw and John Stones, and the goalkeeper Jordan Pickford. All have had superb tournaments.

Still, you suspect the three of them might have struggled to keep Germany at bay on their own.

Like many of this country’s most cherished institutions, this is an England team built on migrant labour. Harry Kane, who scored the clinching second goal against Germany and added two more against Ukraine, was born to an Irish father who moved to London from Galway. Bukayo Saka’s parents are Nigerian. Raheem Sterling was born in Jamaica. Ben Chilwell’s father emigrated to Britain from New Zealand. In total, 13 of England’s 26-man squad could have chosen to represent another nation.

Quite apart from this, English football has benefited immensely over the past 30 years from what you might describe as its “open borders” policy. The influx of foreign footballers from the 1990s onwards has often been blamed for stifling opportunities for young English players, but few dispassionate observers would deny that the Premier League – from which 24 of England’s 26 players have emerged – is among the best in the world.

Moreover, many of the team’s key players have developed their games under the tutelage of migrant coaches. Sterling and Phil Foden would not be the players they are today without the influence of Pep Guardiola at Manchester City.

Kane, Shaw and Kieran Trippier all owe their rise to the opportunities granted to them by Mauricio Pochettino at Tottenham and Southampton. Without his intensive football education at the hands of Marcelo Bielsa at Leeds, Kalvin Phillips would be another jobbing Championship midfielder playing for his next contract.

You could argue that all this is, or should be, entirely irrelevant. Indeed, there is a persuasive case to be made that using the accomplishments of prominent, high-achieving individuals to underline the benefits of immigration is a counterproductive tactic, feeding into a narrative in which migrants have to “prove their worth” to gain acceptance in a host society. It goes without saying that Robert and Melanie Rashford should not need to have produced a superstar footballer called Marcus to be treated with dignity and humanity.

And yet at this juncture, with the country uniting around the success of Gareth Southgate’s side, with immigration returning to the political agenda, with the Windrush scandal still fresh in the mind, it feels right to expose the noxious double standard of populist demagogues like Patel as the shameless opportunism it is.

On July 6, the day before England’s semi-final against Denmark, the Home Secretary unveiled the Nationality and Borders Bill in parliament – the latest front in the government’s attempt to correlate migration with criminality, even as it embraces this immigrant England team with its polyvalent identity and abhorrence of racist dog-whistling.

Unfortunately for Patel and her colleagues in government, this is not a team that can easily be co-opted into their brand of un-nuanced flag-waving. There is, after all, an alternative story to be told here. For all the passion and fervour generated by international tournaments, modern football is a resounding refutation of narrow-minded ethno-nationalism.

This is a sport that has always thrived on the easy interchange of expertise and talent across borders, on mixing and kicking ideas around. England’s possession-based football is inspired by Spain’s (itself based on the 1970s Dutch school). Its emphasis on pace and pressing borrowed from Germany; its centralised academy system modelled on France’s.

Above all, its outlook has been shaped by the diversity of its influences, by a complex world in which we are not simply one thing or another, but fluid and plural. At a moment of surging ethno-nationalism, rampant nativism and widening cultural division, it feels more vital than ever to get across that message: to point out the incongruity of wrapping yourself in England team colours while spurning the values they represent.