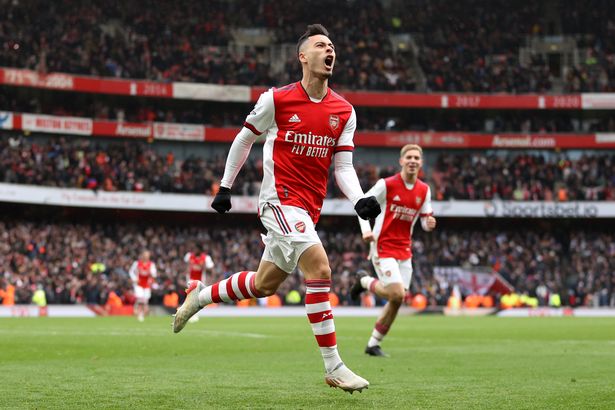 Gabriel Martinelli is now seemingly in manager Mikel Arteta ‘s good books, recent performances suggesting the Brazilian has heeded advice given to him by his boss earlier this year. The 20-year-old’s relatively short Arsenal career has already been somewhat of a rollercoaster, instant success followed by a lengthy spell on the side-lines with a serious knee injury.

The Gunners fanbase were quick to salivate over Martinelli’s potential after he notched 10 goals in 26 appearances during his breakout campaign in 2019-2020, becoming the first teenager to score 10 goals in a season for Arsenal since Nicolas Anelka.

However, following a six-month knee injury layoff in 2020, the Olympic Gold Medallist found it particularly difficult to play his way back into Arteta’s plans. Where once Martinelli was heralded as Arsenal’s next big youth star, his thunder was stolen by the likes of Bukayo Saka and Emile Smith Rowe during his road to recovery.

Some bright performances at the tail-end of last term led to optimism that the former Ituano FC forward had rediscovered his form, but this season began in similar fashion to the majority of the last.

Martinelli was used sparingly for the disastrous opening exchanges of Arsenal’s season, given the odd-five-minute cameo appearance off the bench as a chance to strut his stuff.

Arteta defended his decision to bench Martinelli regularly to the Gunners faithful earlier this year, explaining: “He needs time. He is so willing and so anxious that it can block his development sometimes as well.

“Sometimes he won’t understand my decisions but the only reason I make those is to help him, so when he gets the chance to sprint, he can sprint and when he falls, he goes again.”

The Spaniard went on to reveal that Martinelli’s response to being benched has not helped him on occasion, “There are a few things that have to be better and one of those is to manage when he doesn’t play,” he added.

“You have to know how to suffer when you are on the bench. You have to be able to swallow that, all your ego and anger, all your willingness to play the game.”

Recent weeks would suggest Martinelli has heeded Arteta’s words of wisdom and in turn been rewarded with significantly more game time. It was Martinelli that the Arsenal boss turned to against Newcastle when Saka trudged off injured, rather than £72 million ($96 million) man and club-record signing Nicolas Pepe.

It took all of 90 seconds for the Brazilian to prove why, bagging his first of the season in delightful fashion after delicately lobbing the ball past the onrushing Martin Dubravka to seal three points for Arsenal.