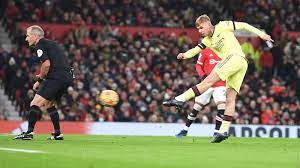 Arsenal boss Mikel Arteta could be without Emile Smith Rowe and a trio of other players for Monday night’s Premier League clash with Everton. Smith Rowe has evolved into one of the Gunners’ most important players over the past 12 months and has started this season in red-hot form with five league goals in 14 games.

But he’s a fitness doubt for Monday night’s match with a tight groin after netting in Thursday night’s 3-2 defeat to Manchester United. Arteta is also sweating on the fitness of Bernd Leno, Sead Kolasinac and Granit Xhaka ahead of their trip to Goodison Park.

Leno (groin) and Xhaka (knee) have an outside chance of featuring against the Toffees with Kolasinac ruled out until January with an ankle injury. It’s unlikely any of that trio would have started the game against Everton, although Xhaka’s return to training will be a welcome boost for Arteta after he picked up a knee injury back in September.

But it’s the absence of Smith Rowe which will be the main concern for the Spaniard ahead of his return to Everton, with the Hale End graduate now one of the first names on Arteta’s team sheet.

Arteta spent over five-and-a-half years on Merseyside after he was snapped up by former boss David Moyes back in the January transfer window of 2005. He was then lured to Arsenal by Arsene Wenger in 2011 and ended up seeing out the rest of his playing career in north London.

He returns to Goodison Park tonight with current Toffee’s boss Rafael Benitez in a sticky situation after an abject run of results was compounded by a derby-day drubbing against Liverpool in midweek.

And although Arteta has backed Benitez to come good at Everton, he’s hoping to take full advantage so his side can bounce back from their own midweek disappointment and get their bid for European football next term back on track.

“When you are competing you have to go toe to toe with whoever is in front of you because they are going to do the same for sure,” Arteta said when discussing the clash with his old club.

“I’ve been there in great moments and I can tell you as a player it’s incredible. I haven’t seen what is actually happening, it’s pretty difficult to guess on TV. But I imagine when the crowd is not with the team it’s harder to play.

“You always have empathy because you know internally how much you suffer and in the difficult moments, you have to go through that. Talking about Rafa, who I know personally as well, the experience he has and what he’s done in the game is remarkable.”

Pick your team for Arsenal game against Everton, then share it with others and see the most popular selection by all fans. Everton are in turmoil both on and off the pitch after their heavy defeat to Liverpool, with The Mirror revealing that director of football Marcel Brands had been axed on Sunday.

The transfer chief has paid the price for a string of uninspiring signings; leaving Benitez solely in charge of transfers going forward.

But first the former Liverpool boss has to make it to January – and he’s only likely to do that if he can find a way to halt Everton’s shocking form.