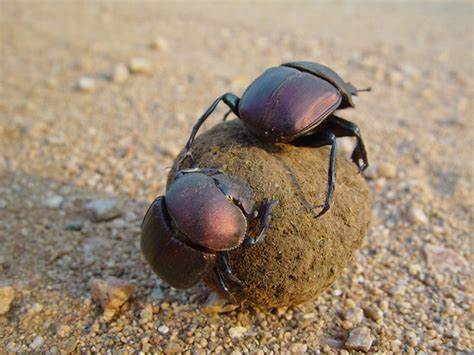 Placed over the heart in the wrappings of Egyptian mummies, archaeologists have often found carved amulets of scarab beetles, a species of dung beetle. The amulets, many with spells inscribed on them, were intended to help the dead in a final judgment by the jackal-headed god of death, Anubis, who would weigh the hearts of the deceased to assess whether they were worthy of the afterlife.

The ancient Egyptians also believed that a dung beetle drove the movement of the sun, because the sacred scarab (Scarabaeus sacer) – which sculpts dung into balls for meals, gifts for potential mates or repositories for eggs – rolls the balls across the ground in a manner that reflects the sun’s journey across the sky.

In fact, it’s the sun that steers the movement of dung beetles. And so does light from the moon, and from the distant stars of the Milky Way. With a life devoted to excrement but guided by the heavens, dung beetles might embody the famed Oscar Wilde quote, “We are all in the gutter, but some of us are looking at the stars.”

“Tiny brains can solve fantastic tasks,” says neurobiologist Marie Dacke of Lund University in Sweden, one of a small cadre of researchers who have worked for years, often as a team, to piece together the tricks the insects use to roll balls in their eerily straight lines.

Roughly 600 of the 8,000-plus known dung beetle species roll such balls, scurrying away from mounds of animal dung with spheres of excrement for about six minutes before they bury the balls, along with themselves, so they can dine underground in peace.

To keep their cargo from getting stolen by rivals, ball rollers have evolved to escape from dung piles in the fastest, most efficient way possible – a straight line, as the scientists describe in an article in the Annual Review of Entomology.

“In South Africa, elephant dung is just alive with dung beetles – you can find hundreds or even thousands of dung beetles in a dung pile, and they’ll happily smash each other up to steal a ball,” says neuroethologist Eric Warrant at Lund University.

“The last place they’d want to end up is back at the dung pile with all the others, so they’ll roll in a straight line in any direction, as fast as they can.”

But travelling in a straight line is surprisingly difficult. A 2009 study found that human volunteers in a German forest and in the Sahara, Desert repeatedly plodded around in circles when they could not see the sun and blindfolded participants walked in circles as small as 20 metres wide.

Without a point of reference, the paths that people and other animals take can easily drift from straight to spiral, due to factors such as uneven terrain.

Remarkably, dung beetles keep straight even though they can’t see where they are going while rolling. They propel their balls with their hind legs, moving backwards with heads pointed at the ground (bringing to mind the quote of how dancer Ginger Rogers did everything her renowned partner Fred Astaire did, save backwards and in high heels).

As far back as the fifth century, Egyptian scholar Horapollo described the beetle’s movement as rolling its ball from east to west, while looking east. Remarkably, it took until 2003 for Horapollo’s observation to be confirmed. When entomologist Marcus Byrne at the University of the Witwatersrand in Johannesburg, along with Dacke, neuroethologist Eric Warrant at Lund University and others, placed five species of dung beetles in little arenas on farmland in South Africa, the creatures usually rolled dung balls in the direction of the sun.

But when the team reflected the sun off a mirror while hiding the real sun from view, the insects followed the reflected sun instead. Similar responses are seen in the lab when using an LED as an artificial sun, Dacke says.

But what happens around noon when the sun is at its zenith, halfway between sunrise and sunset, making it an unreliable cue for distinguishing east from west?

A 2019 study revealed that the South African dung beetle Scarabaeus lamarcki can rely on the wind instead. “We believe they’re detecting the wind via their antennas,” Dacke says.

This strategy makes sense at the edge of the Kalahari Desert, where these insects live. The wind there blows strongest when the sun is at its highest, driven by heat rising from the land after a morning’s baking.

In experiments, neuroscientist Basil el Jundi at the University of Würzburg in Germany, with Dacke, Byrne and their colleagues, placed a pair of table fans facing each other across a ball-rolling arena. When one fan blew, the dung beetles rolled their balls in a variety of directions. But when they switched to the other fan, each insect typically rolled its ball in the opposite direction from before.

In other words, the precise direction the wind is blowing doesn’t seem to matter to the insects – what matters is that it blows constantly, in mostly the same direction, for the six or so minutes that the insects roll their balls before burrowing into the ground, helping them keep a straight course.

And the beetles ignore the wind entirely as a navigational cue when the sun is not directly overhead. “They have all these fallback mechanisms – if one system fails, they can switch over to another,” Byrne says.

In addition to light, some species of dung beetle can use the wind as a cue to help them roll their dung balls in straight lines, as revealed by experiments using table fans. This allows the beetles to roll straight even when light cues are absent, such as when the sun is high or the day is cloudy.

Sun and wind work very well as cues for dung beetles that are active during the daytime. But a few of the ball-rolling species are nocturnal. For them, a 2003 study revealed that guiding light can ripple from the moon.

Light waves can ripple up and down, left and right or at any angle in between. But when light from the sun or moon strikes tiny particles in the atmosphere, some of it gets polarised: the waves ripple in the same direction.

Travel restrictions have no bearing on coronavirus spread – researchers

Mystery of beetles depending on moon, sun light for orientation