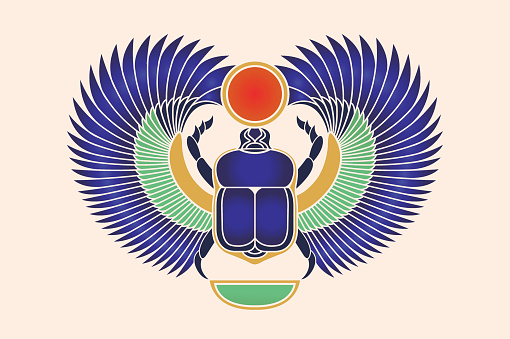 Mystery of beetles depending on moon, sun light for orientation

Neurobiologist Marie Dacke of Lund University in Sweden, entomologist Marcus Byrne at the University of the Witwatersrand in Johannesburg (South Africa), neuroethologist Eric Warrant at Lund University and their colleagues noticed that the nocturnal African dung beetle Scarabaeus zambesianus could roll in straight lines on moonlit nights but not on moonless ones.

To figure out if these insects depended on the moon’s position or the polarised light that it emits, the researchers used a board to hide the moon from view, though its light was still visible in the night sky.

They next placed a polarising filter over the insects to rotate the rays of moonlight 90 degrees. This made the beetles turn abruptly – showing that polarised light was the orienting cue.

But the moon is not out every night. What then? Another potential cue came to Byrne and colleagues one night in 2007.

“After a great day’s work, the moon goes down and we’re sitting and having a beer under the beautiful desert sky of the Kalahari, and there’s the Milky Way,” Byrne recalls. “And one of us said that, if we can see that, they must be able to see that.”

And they do. Although the insects’ eyes are too small and weak to navigate from single stars, a 2013 study revealed that they apparently see the brighter, wide band of light that the Milky Way draws across the night sky.

In experiments with the dung beetle Scarabaeus satyrus under the simulated night sky of the Johannesburg planetarium, Dacke, Byrne, Warrant and colleagues found that the Milky Way’s path could steer the insects’ course – making dung beetles the first known animals capable of orienting themselves using this cue.

This presented a puzzler, however, since the researchers had earlier observed that the insects meandered on moonless nights. But when the worried scientists reviewed their notes, they found that these earlier experiments took place in months when the Milky Way was too low in the night sky for the beetles to see it.

Nocturnal dung beetles can use not just moonlight but the light of the Milky Way to guide their path when rolling dung balls, field experiments have revealed.

One set of cues that dung beetles don’t rely on for navigation are landmarks or anything else on the ground.

“We’ve created arenas with high walls and a 30-centimeter opening, and we thought, ‘OK, guys, solve this one, there’s only one way to get away from the dung pat’ — and they fully ignored it,” Dacke says.

In another study, the scientists filled half the arena with dung beetles tied to the floor. One might imagine that beetles rolling their dung balls would steer clear of their tethered brethren – “but no, they just rolled over the tied-down beetles,” Dacke says.

The scientists conducted still other experiments in which dung beetles wore broad-brimmed cardboard caps so they could not see the sky. The haberdashery caused the beetles to roll around in circles, “fully lost,” Dacke says – confirming their dependence on celestial cues.

Since they don’t have permanent nests, instead regularly moving from one ephemeral dung pat to another, memorising landscapes may not prove useful when they spend their life wandering about, says neuroethologist Emily Baird of Stockholm University.

Although much has been learned about the dung beetle’s tricks and traits, there’s a lot more still to understand. “It never fails to surprise me how complex insects can be,” Baird says.

“We’re looking at these tiny animals with brains the size of poppy seeds that use the sun and the wind to guide them … We have these massive brains and we still don’t yet understand how these small brains work.”

Check out Reset – An ongoing series exploring how the world is navigating the coronavirus pandemic, its consequences and the way forward.

As far as scientists can tell, dung beetles are the only animals to use visual cues for orientation but ignore landmarks, Baird says. She and Dacke are comparing dung beetle brains with those of beetles that do use landmarks for navigation to learn more about how these complex behaviours evolved.

And to shed light on the neural circuits dung beetles use for orientation, Dacke, el Jundi and post-doctoral researcher Cody Manchester aim to record signals from neurons as the creatures roam the African savannah – using tiny electronic backpacks connected to the beetles’ brains.

“These beetles are very, very strong, one of the strongest animals for their body size, so they’re very useful to attach things to,” Dacke says.

The scientists also want to learn more about a strange dance the dung beetles do after they’ve rolled up their balls of dung: mounting the ball and, for a few seconds, gyrating on top before climbing down and setting off with the ball.

This dance may help the insect take a snapshot of the sky’s features at the start of its journey to match with its view of the heavens as it moves in order to maintain a straight path. “It’s a very elegant strategy,” el Jundi says.

Understanding how these insects can solve complex navigational tasks might help computers use as few computations as possible to perform similar feats, the scientists speculate.

Byrne notes that a $1 million cash prize was offered in the DARPA Grand Challenge, which had autonomous vehicles drive a desert course more than 200 kilometres long – weighed down with cameras, proximity sensors and GPS.

“The more we can learn about dung beetles,” he says, “the more we can maybe get tiny robots to behave in a similar fashion in completely unknown landscapes.”