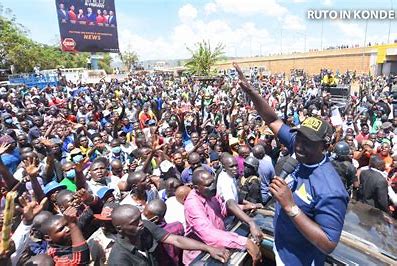 When Kenya Deputy President William Ruto was stoned in opposition party ODM stronghold in western Kenya on November 10, he accused Raila Odinga supporters of instigating the attacks. This was barely two weeks after Mr Odinga, who addressed a well-attended political rally in Ruto’s Eldoret Town backyard.

A few of the opposition leader’s allies were equally subjected to violence that was blamed on the deputy president. Similar violence was also witnessed in Nairobi’s populous Githurai area as Odinga returned to Nairobi from central Kenya. Ruto was also a target of violence in Busia County in western Kenya.

Violence is, traditionally, the signature of Kenya’s elections cycles with gangs of youths retained by key political players to do the dirty job of intimidating rivals in a choregraphed voter suppression scheme. With the 2022 General Election just nine months away, the violence witnessed in Kisumu and Eldoret is expected to rise to grotesque levels with party militias taking over political messaging with violence.

As it stands, the political class in Kenya has already engaged the first gear and the violence is expected to ratchet up and become bloodier six months to the August 9, 2022 polls.

Instructively, Eldoret in the defunct Rift Valley province and Kisumu in Nyanza were the theatres of the 2007-08 horrors of post-election violence that claimed 1,133 lives and uprooted more than 500,000 from their homes and farms.

What is happening in Kenya today is a just a macrocosm of the changing trends of democracy in the world, the most bizarre party militia being the January 10 White supremacists’ invasion Capitol Hill by former US President Donald Trump.

The report released in the first week October says the Burundi ruling party’s youth militia, the Imbonerakure, chasing opposition protesters in the presence of police in May 2015.

Recent years have seen a rise in the deployment of party militias. They use violence to intimidate rival candidates and opposition constituencies to alter the political landscape in support of the party in power – a crude coercive tool to keep a population from challenging the status quo.

While often associated with youth-wings of a ruling party, these militias are typically not acknowledged by the party, affording plausible deniability for their actions, the report explains.

“Party militias are a threat to constitutional democracy. They operate outside the legal chain of command, commit human rights violations, and rely on violence against civilians,” ACSS says.

Party militias operate outside the law with near-total impunity. They are often a prominent feature of elections, sowing fear on behalf of incumbents who find them handy when they believe they will be unseated, or when they evade constitutional term limits to entrench themselves.

Others have the appearance of being more “official” especially when they are operating in tandem with regular units or paid through state coffers. Côte d’Ivoire, Gambia, Nigeria, and Sudan offer examples.

ACSS notes, “Ruling party militias, therefore, are a disruptive adaptation to multiparty politics intended to shift the electoral playing field to one party’s benefit. In addition to undermining democratic principles of free and fair elections, party militias compromise the integrity of security sector institutions – via their collusion in violence against citizens or for their tolerance of this extra-legal behaviour.”

In countries like Kenya and Uganda, it says, some party militias exist intermittently and are primarily mobilised during periods of political tension.

“A good example is Uganda’s Arrow Boys. They were the tip of the spear in Uganda’s wars against the Lord’s Resistance Army but later became part of the ruling party’s campaign machinery in the 2010, 2016, and 2021 elections. They worked as constables, tasked with ‘managing voting’ but were implicated in multiple incidents of violence,” the report says.

ACSS explains that an important subtext to these party militias is the role youth will play in Africa’s democratic development.

“Much of the push for democratic change in Africa is sustained by cohorts of 19- to 25-year-olds, reflecting the aspirations of Africa’s large and vibrant younger generation. They tend to be restless, risk-tolerant, and assertive. Paradoxically, this cohort is also a recruiting ground for party militias, creating an explosive mix that plays out in deadly encounters between youth militias and democracy activists” it says.

As their main purpose is to tilt the electoral playing field, party militias are a threat to constitutional democracy. They operate outside the legal chain of command, commit human rights violations, and rely on violence against civilians.

“The use of party militias can be traced back to Kenya’s Jeshi la Mzee (the Boss Army), which inflicted destabilising violence during the elections of 1992, 1997 and 2002 under President Daniel arap Moi. Moi’s aim to link ethnic violence with multiparty elections in the minds of the public shows the lengths to which leaders are prepared to go to subvert democratic processes. He left a grim legacy. Kenya has witnessed militia violence in every poll since his departure,” the report says.

The epitome of the modern party militia is Burundi’s Imbonerakure, which several UN reports hold responsible for criminal atrocities. The Imbonerakure is controlled by parallel chains of command running through the President’s Office, Ministries of State and Public Security, National Intelligence, and a faction of ruling party war veterans who call themselves the Committee of Generals.

The report notes, “Two of them, General Gervais Ndirakobuca, whose nom de guerre is Ndakugarika (I will kill you), and General Alain Guillaume Bunyoni, the former Minister of Public Security and current Prime Minister, are under European Union sanctions for alleged human rights abuses.”

Bunyoni is also on the US) sanctions list. A 2017 law gives the Imbonerakure the status of a reserve force, further politicising Burundi’s military, contrary to the Constitution and the guiding Arusha Accords.