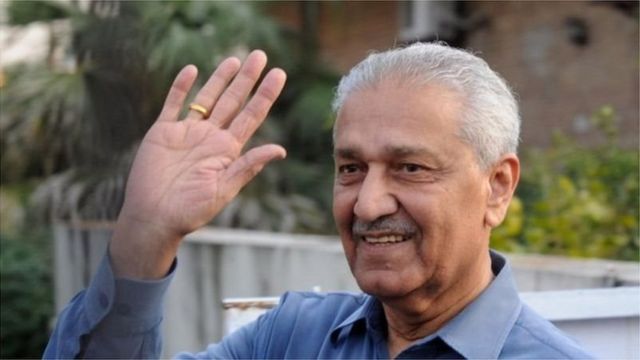 Scientists designing weapons of mass destruction are usually hidden from the public, watched by security and intelligence agencies. Rarely are they powerful celebrities who give interviews and publish their research.

Abdul Qadeer Khan, the materials scientist who smuggled nuclear-weapons technology into and then out of Pakistan, attended scientific conferences and openly advertised his services. “We have the capability of going nuclear if the politicians decide,” Khan boasted when I interviewed him in the lobby of an Islamabad hotel. He has died aged 85.

As the world later learnt to its cost, that capability included the first freelance nuclear-weapons technology business, selling uranium-enrichment technology to Iran, North Korea and Libya. Despite confessing to wrongdoing on live television, for millions he died a martyr, restoring a poor country’s pride in matching richer nations in defence technology.

Abdul Qadeer Khan was born in 1936 in Bhopal, India. The family migrated to Pakistan in 1952, after decolonisation. Graduating in metallurgy from the University of Karachi, Khan studied further in what was then West Germany, and in the Netherlands. At the Catholic University of Leuven in Belgium he was awarded a PhD in 1972 for work on copper-based martensites, extremely hard forms of steel.

Then came the turning point. He went to work for FDO, a company based in Amsterdam that supplied the high-speed centrifuges that enrich uranium for use in nuclear power plants.

By the early 1970s, Asian countries were in an arms race. China and India had fought one war; India and Pakistan had fought three. China tested a nuclear weapon in 1964. In 1972, Pakistan’s then prime minister, Zulfiqar Ali Bhutto, tasked scientists with designing a nuclear device.

Bhutto’s chief scientific adviser, Abdus Salam, proposed creating a secret theoretical-physics group. This would be in the tradition of the US Manhattan Project, the group’s then head, Riazuddin, wrote in his memoir A Physicist’s Journey (2020).

One of Pakistan’s problems was how to acquire the plutonium or uranium needed to produce a nuclear explosion. Weapons can be made using plutonium-239. This was potentially available as a by-product of power plants. But Pakistan’s nuclear-energy materials were being monitored by the International Atomic Energy Agency, based in Vienna.

Uranium, too, was a possibility. But Pakistan lacked the enrichment technology to separate the rare fissile isotope – U-235 – from its abundant naturally occurring source. Until, that is, a letter found its way to Bhutto from Khan, then working in the Netherlands, who offered his services to the nuclear-weapons effort.

The timing could not have been better: the missive arrived shortly after India’s 1974 nuclear test, as Bhutto was becoming impatient at the lack of progress from his scientists.

Khan relocated to Islamabad – with the designs for high-speed centrifuges to create fissile uranium. He was initially employed by the Pakistan Atomic Energy Commission (PAEC), but fell out with top management, accusing it of stalling on the prime minister’s nuclear ambitions.

The PAEC administration regarded Khan as unreliable. But Bhutto bought into his vision and granted him strategic and operational independence to establish his own laboratory near Islamabad.

In April 1979, Bhutto was hanged after a military coup, but Khan’s star continued to rise. He persuaded the army to maintain his funding and operational autonomy. By the 1990s, Khan was at the heart of a web of scientists, engineers, suppliers, fixers and front-companies. They imported nuclear materials, and incorporated these into designs and equipment for export.

Between 1987 and 1997, Khan’s network provided Iran with centrifuge designs and components. Next came North Korea, which was supplied with centrifuges, sketches, technical data and uranium hexafluoride gas (UF6), used in uranium processing. From the late 1990s, Libya bought at least 10,000 centrifuges and 1.87 tonnes of UF6.

But Libya was a bridge too far. Western intelligence agencies had been piecing together records of phone conversations, shipments, travel and financial transactions. When Libya gave up its nuclear ambitions, documents passed to the United States named the Khan network as a source for supplies. The administration of US president George W. Bush pressed Pakistan to act and, in 2004, Khan confessed on television, in English.

Although later pardoned, Khan spent the rest of his days under effective house arrest.

His reputation in Pakistan remained sky high, however. According to at least one source, he donated millions of dollars to science and education causes, but faced little or no parliamentary scrutiny. Hassan Abbas, former deputy-director of investigations at the country’s anti-corruption watchdog, writes in his book Pakistan’s Nuclear Bomb (2018) that he decided against pursuing a corruption inquiry on the grounds that investigating the country’s most popular person was too big for his agency to handle.

In the end, Khan’s defenestration proved a convenient distraction for the army, the government and the PAEC. Pakistan, it is estimated, has 165 nuclear warheads, the world’s sixth largest nuclear arsenal. The PAEC, as the apex nuclear body, organised Pakistan’s 1998 nuclear tests.

Khan was not the ‘father’ of Pakistan’s nuclear-weapons programme, as was widely reported: it was a team effort. But he was a crucial participant, and took advantage of the recklessness and incompetence of a state determined to acquire weapons of mass destruction at any cost, endangering the lives of its own people, and the wider world.

Facebook: Whistleblowers can have their say, but Big Tech will always have their way and money