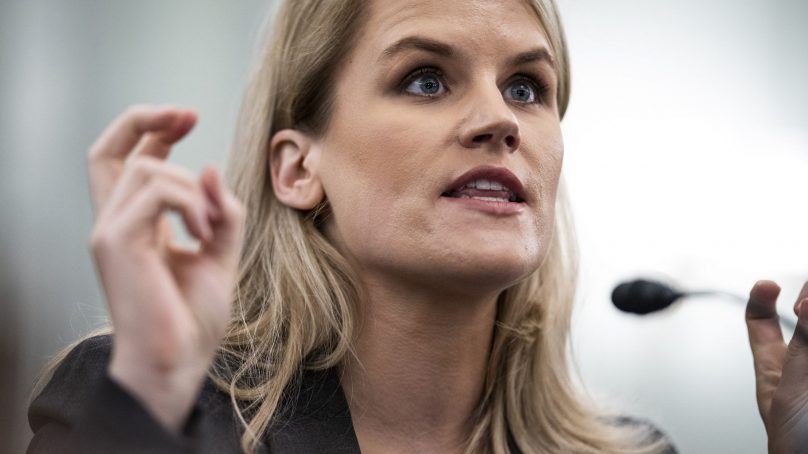 Facebook: Whistleblowers can have their say, but Big Tech will always have their way and money

Truth be told, predicting the future isn’t my strong suit (and I have a trophy to prove it) – but here’s one prediction I make with full confidence: The latest Facebook revelations, courtesy of whistle-blower Frances Haugen, will have zero impact on regulation.

No new laws, no new regulations, no new challenges worth a damn. And the issue isn’t Haugen’s testimony or proposals (not that there aren’t issues with both), nor the inanity of some of the questions she got in return (ditto).

If whistleblowing has an archetypal story, it goes something like this. A stand-up figure within an organisation, an every-person, comes face to face with some central injustice the organisation is perpetuating.

Sometimes the motive is company profit, sometimes it’s personal profit, but whatever the case, there’s a smoke-filled room of men with cigars cackling while the rest of the world – including regulators – carry on oblivious to the damage being done.

At great personal risk, the every-person goes public with their concerns: the truth outs. There are hearings called, exposés published, laws passed – the sclerotic machinery of oversight belatedly kicks into gear, and the people in charge exchange their cigars for handcuffs. Think: Sherron Watkins, Cynthia Cooper or Daniel Ellsberg.

This is a popular idea for how change happens, and its popularity is no surprise, because the change it promises riffs on some very foundational myths of American society. It’s built on the assumption of good intentions – on the idea that, sans a few ne’er-do-wells, regulators (and organisational employees, and legislators) are ultimately just dependent on the right information to ensure justice is done. It’s built on assumptions about the importance of the individual whistle-blower – the individual, full stop. No wonder that, in a cultural milieu that so loves its individualism (even, as Rodrigo Nunes notes, on the left), we hold up the whistle-blower as the path to justice.

But today, whistleblowing doesn’t make those movements more possible; to the contrary, as I’ve previously written, with its insistence on the individual expert as the source of change, it makes them more difficult to sustain. Precisely because it venerates the single, public, heroic figure, the notion of whistleblowing actively denigrates the less glamorous work necessary to sustain activism.

These assumptions obscure some awkward truths of their own. They obscure, for example, how central the identity and perspective of “the whistle-blower” are to the audience they receive. Many people have, quite rightly, highlighted the different experiences of Frances Haugen and Sophie Zhang: the former a nice white lady whose concerns don’t stop her from arguing that Facebook should not be broken up, the latter an Asian American woman who sees Facebook’s ideology and financial interests as fundamentally undercutting efforts to solve these problems.

Only one of them got a congressional hearing. We might compare both to Alex Stamos, whose resignation from Facebook in 2016 resulted in a write-your-own-job-description offer at Stanford, and contrast all of the above with Timnit Gebru, who was fired from Google for (so far as anyone can determine) having the temerity to be angry while Black.

As Daniela Aghostino, Nanna Bonde Thylstrup and I have noted at different points, who tells the truth, matters. What that truth is, matters. The stories that have legs – that get uptake from the status quo – tend to be those that challenge it the least.

Precisely because it venerates the single, public, heroic figure, the notion of whistleblowing actively denigrates the less glamorous work necessary to sustain activism.

Even if whistle-blowers’ treatment was entirely neutral (whatever that means), they still can’t save us. Because of that other assumption hidden behind whistleblowing: that the truth is the only thing standing between the present and a just future. It’s hard to see how, exactly, this idea lines up with our current reality.

In 2002, the Sarbanes-Oxley Act, inspired (in part) by Cooper’s and Watkins’ disclosures, passed into law after a 423-3 vote in the House of Representatives and a 99-0 vote in the Senate. In contrast, the present day sees a struggle to acquire even a single cross-party vote on issues as seemingly uncontroversial as “the government should avoid defaulting on its debt.”

In this environment, whistleblowing can’t save us, because the issue isn’t an absence of information but an absence of will. And what builds will, and shifts norms, doesn’t look like a single, isolated figure speaking truth, but mass movements of people setting new standards and making clear there are costs to regulators and companies for not attending to them.

They might seek to participate in an ecology of activism; a multitudinous array of actors coordinating for change rather than competing for visibility.

Does this mean whistleblowing is pointless? Of course not. Information always has the potential to be useful if deployed correctly. But the default attitude toward whistleblowing – tell some left-leaning newspapers, tell some legislators and the hard work is done – is simply naive.

The most generous of interpretations is that these figures genuinely believe this is the hard work; that they have that aforementioned faith in the institutions they’re disclosing to. The less generous interpretation is that it is, to a certain degree, a secular form of confession: an unburdening of souls by complicit figures who wish for absolution (absolution that, just-so-coincidentally, sets them up for an entirely new career as the “acceptable” and “safe” technology critic, with a contract for a mediocre book and a largely vacuous research institute).

But if whistleblowing-as-usual isn’t changing anything, then what we need is a different way to approach whistleblowing and disclosures, a way that treats whistle-blowers’ knowledge as just one tool in a wider repertoire, and their expertise as one stock of knowledge in a broader realm of concerned, invested and knowledgeable actors.

Rather than discharging their moral responsibilities through disclosing to regulators and walking away to start their own think tank, whistle-blowers might seek to strengthen, draw attention to, and participate in the many pre-existing movements for change in this area – movements led and driven by those people most affected by technology’s excesses.

Our Data Bodies, the carceral tech resistance network, the Detroit Community Technology Project; all of these collectives and organisations have been working on problems of surveillance, power and injustice in data and technology since long before Haugen (or Harris, or Willis, or, or, or …) turned critic.

They might seek to participate in an ecology of activism; a multitudinous array of actors coordinating for change rather than competing for visibility.

Imagine if, rather than disclosing to The Wall Street Journal or The New York Times, Frances Haugen (or any of a whole range of other self-appointed moral compasses) had disclosed to those movements. If they had gone to existing organisations, already doing the work, who could contextualise the knowledge they brought and made those organisations the focus of the story.

Imagine if they had used the attention that comes from the information, they brought not to keep the limelight on their (individual, insider) perspectives on what change looks like, but the longer-term thinking of the people who have viscerally experienced the consequences that whistle-blowers find themselves more-abstractly squirming over.

Imagine if we, the public, and they, the regulators, could see proposals coming not from a Silicon Valley coder but from community organizers, street activists, and practitioners who fundamentally understand that what is needed is not a messiah but a movement.

Perhaps I’m too cynical. Perhaps something does, now, fundamentally change in how Facebook is treated, regulated, perceived. If it doesn’t, what we need, in part, is changes not just to Facebook but to our understanding of how change happens.

And if I’m wrong – if regulatory shifts do, somehow, come from one white technologist having a smart idea that people in suits can capitalize on – how fundamental can that change be? “One technologist promising to disrupt the system” can’t be how we go about disassembling Facebook – it’s precisely how we got Facebook.

Reporting on humanitarian crises can be exploitative and offensive, a fount of lazy and racist tropes