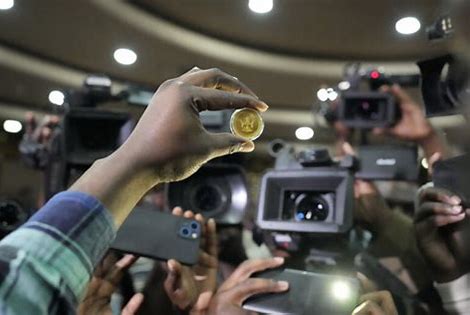 Zimbabwe has launched gold coins to be sold to the public in a bid to tame runaway inflation that has further eroded the country’s unstable currency.

The unprecedented move was announced on Monday by the country’s central bank, the Reserve Bank of Zimbabwe, to boost confidence in the local currency. Trust in Zimbabwe’s currency is low after people saw their savings wiped out by hyperinflation in 2008, which reached five billion per cent, according to the IMF.

With strong memories of that disastrous inflation, many Zimbabweans today prefer to scramble on the illegal market for scarce US dollars to keep at home as savings or for daily transactions. Faith in Zimbabwe’s currency is already so low that many retailers don’t accept it.

The central bank disbursed 2,000 coins to commercial banks on Monday. The first batch of the coins was minted outside the country but eventually they will be produced locally, according to the governor of the Reserve Bank of Zimbabwe, John Mangudya.

The coins can be used for purchases in shops, depending on whether the shop has enough change, he said.

“The government is trying to moderate the very high demand for the US dollar because this high demand is not being matched by supply,” said Zimbabwean economist Prosper Chitambara.

“The expectation is that … there will also be moderation in terms of the depreciation of the local currency, which should have some kind of stabilising effect in terms of pricing of goods,” he said.

Any individual or company can buy the coins from authorized outlets such as banks, according to an announcement by the country’s central bank.

People can buy the gold coins from authorised agents such as banks using the local currency or foreign currencies and purchasers can choose to keep the coins at a bank or take them home. Foreigners can only buy the coins in foreign currency, said the central bank.

Called Mosi-oa-Tunya, which in the local Tonga language refers to Victoria Falls, the coins “will have liquid asset status, that is, it will be capable of being easily converted to cash, and will be tradable locally and internationally. The coin may also be used for transactional purposes,” said the central bank.

People holding the coins can only trade them for cash after 180 days from the date of buying, the bank said. The coins, each weighing one troy ounce with a purity of 22 carats, can also be used as security for loans and credit facilities, said the central bank. The price of the coins will be determined by the international market rate for an ounce of gold, plus five per cent for the cost of producing the coin.

Internationally, gold coins are used in countries such as China, South Africa and Australia to hedge against inflation and as an investment opportunity, although they are not as widely used as currency as envisaged by Zimbabwe’s central bank, said Chitambara.

“For Zimbabwe we are in chronic hyperinflation so the expectation is that there will be a huge uptake of these gold coins,” he said. However, most Zimbabweans struggle with daily survival and won’t be able to buy them, he said.

“For the common man, there is not really much to benefit directly from this, especially if you don’t have any excess cash,” said Chitambara.

“Many people have no money for bread, let alone for savings,” he said. “The expectation is that indirectly it will benefit the ordinary person through moderating the prices.”

Companies with excess cash can find the coins useful to store value and also as an alternative investment asset, although individuals and companies are likely to continue preferring the dollar because “it is convenient and highly liquid,” he said.

Selling the coins in fast depreciating local currency could also result in “rent-seeking behaviour, speculation and arbitrage within the economy,” as some could buy using local currency and then sell in dollars later, he said.

The fact that Zimbabwe’s central bank would have to buy the gold from miners of the metal such as informal artisanal miners could also present challenges and result in increased smuggling, analysts say.

“However, should there be a disparity between the amount of US dollars used to purchase the gold from miners and the US dollars used to pay for the coins, this could squeeze the central bank and its intermediaries’ foreign currency reserves. If this ripples to artisanal gold miners, this could result in low deliveries to Fidelity Printers and increase gold smuggling activities,” noted the Morgan report.

Fidelity Printers, a subsidiary of the central bank, is the country’s only authorised gold buyer.

Zimbabwe has substantial gold deposits and exports of the precious metal is one of the southern African country’s major foreign currency earners. Gold production improved to about 30 tonnes in 2021, compared to 19 tonnes in 2020, according to official figures.

Smallscale producers such as poorly regulated artisanal miners contributed 19 tonnes of the gold delivered in 2021, according to official figures.

Gold smuggling has been rampant. The country is estimated to be losing about $100 million dollars worth of gold monthly to smuggling, home affairs minister Kazembe Kazembe has said.

Smuggling costs the country about 36 tonnes of gold annually, according to a report issued this month by the Centre for Natural Resource Governance, a local natural resources watchdog.

Legally all gold mined in Zimbabwe is supposed to be sold to the central bank, but many producers prefer to smuggle the gold out of the country in order to get payment in US dollars.