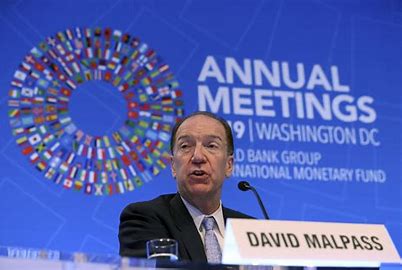 Someday, my grandchildren will read how teams of scientists around the world developed vaccines against Covid-19 within a year. They will also read a sadder history: how millions of people in low- and middle-income countries (LMICs) died after those vaccines came to market. Part of the reason, they’ll learn, was the lack of financing to buy vaccines.

Earlier this month, leaders of the G7 group of rich countries cobbled together a plan to donate one billion vaccine doses to LMICs, but the head scratcher remains: why didn’t the World Bank do this months ago?

The bank entered the pandemic with both the money and the mandate to quickly finance a global vaccination drive. It had roughly $50 billion available in grants and a further $100 billion in lending capacity. But it has lacked leadership and flexibility.

In October, the bank pledged $12 billion in loans to purchase and distribute vaccines, tests and treatments. Eight months later, it had lent just $3.6 billion. Poor countries, mired in debt, are wary to take on more.

The bank is supposed to be a fast, flexible, smart multilateral organization that can act in a crisis. But it has taken months to do so, sacrificing people’s lives and its own relevance.

More than a year ago, the World Health Organization (WHO) and other global health organisations launched the Covax initiative, part of its broader Access to Covid-19 Tools Accelerator (ACT-A) programme to provide testing, treatment and vaccines to rich and poor countries alike. But Covax and ACT-A are receptacles for donor money, not sources of finance. This month, ACT-A announced that it still needs $21 billion.

Meanwhile, the World Bank has seemed reluctant to release money for vaccines. For months, it imposed hurdles beyond the standards of any single stringent regulatory authority or the WHO prequalification system for health products.

The procurement process for the Oxford-AstraZeneca vaccine, for instance, was not eligible for World Bank support until nearly two months after the United Kingdom had begun rolling out the vaccine in January, wasting precious time.

These failures squander the fruits of research. The enormous contributions that science can make to public health, poverty reduction and development come largely in the form of public goods. These are ideas and technologies that have big global benefits, but which any single country – especially poor ones – might be reluctant to pay for alone.

The Covid-19 pandemic is revealing the World Bank’s inability, or unwillingness, to invest in these goods.

The bank took until last month to issue a plan to set things right. On May 31, its president, David Malpass, penned a joint statement with the heads of the International Monetary Fund (IMF), the World Trade Organization and the WHO.

It called for $50 billion in new public spending to accelerate Covid-19 vaccination in LMICs, with at least $35 billion to come as grants to those countries to purchase vaccines and build up their health systems. In a background paper, the IMF’s chief economist, Gita Gopinath, called this plan “possibly the highest-return public investment ever”, with the potential to generate $9 trillion in other outputs, on top of the direct health benefits.

But the proposal had one glaring weakness: none of these institutions volunteered to pay for it.

To be fair, the World Bank president can’t just give away $50 billion. That would limit the bank’s ability to keep lending in 2022 and beyond, possibly angering LMICs as well. And its biggest shareholders, including the United States and other rich countries, would have to be on board. In that case, faced with a World Bank leadership that is dragging its feet, they might just as well buy the vaccines directly, as per the G7’s latest plan.

So, what now? The bank must soften the terms of its loans for health systems and unleash more of its $12 billion pledge as grants for vaccine procurement. The longer it waits, the less good its money will do.

The fate of the world shouldn’t rest on, say, Kenya’s willingness to take on more debt. Unchecked outbreaks kill and disable, and they are breeding grounds for new variants, which do not respect national borders.

Even in the narrowest economic terms, the IMF estimates that its $50-billion proposal to increase the target vaccination rate for LMICs from 30 per cent to 40 per cent by the end of 2021 would boost global economic activity, generating $1 trillion for advanced economies in extra tax revenue alone. It’s unrealistic, not to mention unfair, to expect low-income countries to pay for that.

Achieving the highest possible take-up of vaccines requires that they are free to individuals. The same logic applies to countries, at least to some degree. Myriad other constraints – supply limitations, export bans and weak national health systems – will continue to limit access to Covid-19 vaccines in LMICs well into 2022. The World Bank should ensure that finance isn’t one of them.

The bank says it is doing all it can. Perhaps so, for normal times. But other sectors have been able to innovate and push their capacities during this extraordinary challenge. If there was ever a time to break the bank, this is it.