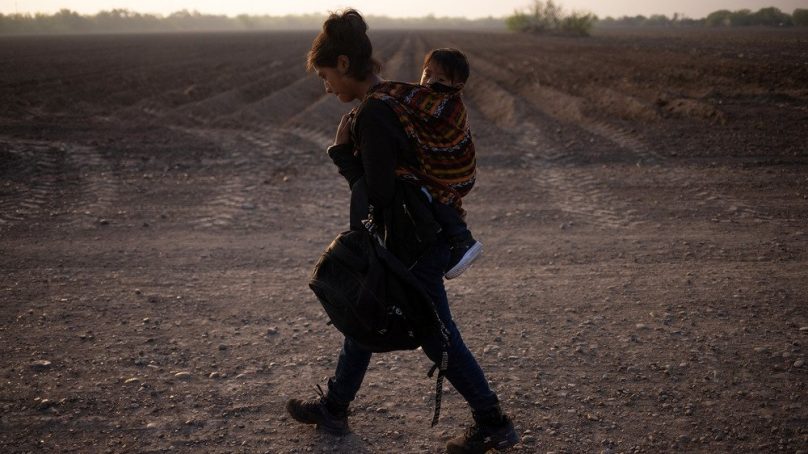 Tens of thousands of women from El Salvador, Guatemala and Honduras, collectively known as the Northern Triangle of Central America, have left their homes to try to reach the United States in recent years.

Many are fleeing rampant gender-based violence. But those who are able to enter the US, often after undertaking long and dangerous journeys to the US-Mexico border, are confronted by a stark reality: It is exceedingly difficult for victims of gender-based violence to be granted protection in the US asylum system.

The Covid-19 pandemic has only exacerbated the situation in the Northern Triangle, and violence against women – and a lack of government protection – is one of the factors driving a sharp uptick this year in the number of people from the region, and elsewhere, attempting to enter the US.

In August, US Border Patrol carried out more than 210,000 apprehensions at the US Mexico-Border – the most in 21 years. The number includes people who attempted to cross more than once after they were expelled from the US under a controversial, pandemic-related public health order known as Title 42.

“We hear those stories over and over again from women who are subject to years and years of physical, emotional, sexual violence,” Bill Holston, executive director of the Human Rights Initiative of Texas, an NGO that helps asylum seekers navigate the US legal system, told The New Humanitarian.

“They go to the police, and they try to get protective orders. And the police will say, ‘Well, this is a private matter,’ or, ‘He’s your husband; you need to go back to him,’” Holston added.

Countries such as Canada, Sweden and the UK have codified rules for gender-based asylum claims, setting a clear path for victims of gender-based violence to get protection. The US has not.

As a result, the circumstances under which victims of gender-based violence have been granted asylum in the US have fluctuated over the last few decades, depending on court decisions and different administrations’ policies on immigration.

Cases often drag on for years, leaving women in a painful state of limbo with no guarantee that they will receive protected status in the end.

Legally complex, the topic has traditionally garnered little public attention outside of the small group of advocates working on it. But the Trump administration’s moves to restrict access to asylum – including specifically barring victims of domestic and gender-based violence from receiving protection – thrust the issue into the national and global spotlight and added urgency to the effort to solidify the legal basis for gender-based asylum claims in the US.

The complicated process entangles women like María, a Salvadoran woman whose asylum case has already dragged on for five years.

In 2015, when her ex-partner, who had abused her for years, found out she was pregnant with someone else’s child, she feared for her life and knew she had to flee. The day before María left, her ex-partner called.

El Salvador has some of the highest rates of femicide and violence against women in the world. According to available data for 2018, one woman was murdered by a man in the country every 24 hours. Steps taken by the Salvadoran government aimed at protecting women mostly exist on paper. In reality, the violence persists with almost total impunity. In María’s case, government officials who she turned to for help told her to reconcile with her abuser because they had a child together.

Now, María’s case is one of 17 selected by attorney Emily Heger and a team of immigration lawyers in Texas who aim to create a clear pathway to protection in the US for women fleeing gender-based violence.

The administration of President Joe Biden – which has so far taken limited steps to undo parts of its predecessor’s legacy on migration while keeping others, such as Title 42, intact – is expected to issue new guidelines about how to treat gender-based asylum claims before the end of the year.

After decades of confusion, advocates hope the guidelines will provide concrete rules for gender-based asylum claims in the US. But some immigration attorneys, including Heger, argue that a strong body of case law is also necessary to establish legal precedent for cases in US courts.

Heger, 33, never intended to become an asylum lawyer. In 2017, she was in law school and planned to use the degree in her role as the chief operating officer of a non-profit organisation that provided jobs and skill training to women in Africa. But while she was on a public bus on the way to the airport at the end of a trip to Baja California, Mexico, her plans changed abruptly.

When the bus pulled over at a stop, the woman sitting across the aisle from Heger lunged out of her seat and tried to run. The man she was traveling with grabbed the woman and shoved her back into the seat. When the woman tried to run again, the man strangled her and pushed her head against the window of the bus. As the woman stopped struggling, she made eye contact with Heger.

No one else on the bus seemed to take notice or care. Heger approached the bus driver, the owner of a restaurant at a bus stop, and others for help, but they all dismissed her, and laughed at her efforts.

After she flew home, images of the woman stayed with Heger. Although she couldn’t help the woman she’d seen on the bus, she started looking for ways to help women like her, which led her to begin working on immigrants’ rights.

“I just had this new found conviction that I need to become a lawyer; I need to take seriously this opportunity to have this skill set to do something for [women like the woman on the bus],” Heger said.

In 1985, the UN’s refugee agency, UNHCR, concluded that women who face harsh or inhumane treatment for gender-based reasons can qualify for protection under the Refugee Convention as members of a “particular social group,” setting an international precedent for countries to grant women asylum based on the fear of persecution or being targeted on account of their gender.

The same year, an asylum case in the US called Matter of Acosta paved the way for women to be granted asylum on account of their gender. But unlike countries that have codified clear rules, the US government did not recognise gender as an example of a particular social group under the refugee definition, leaving the pathway to protection for victims of gender-based violence ambiguous.

As a result, each gender-based violence asylum case had to be constructed from scratch and required nuanced and complex legal arguments, according to Holston. Over time, court decisions narrowed the grounds on which women could be considered part of a particular social group until it became standard for lawyers to argue domestic violence-based asylum cases along hyper-specific lines.