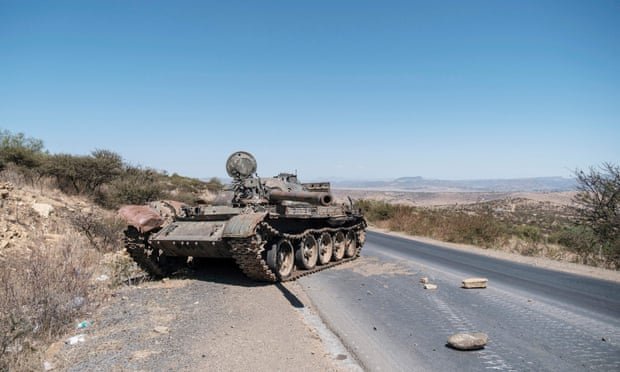 The US has warned Tigrayan soldiers against advancing on Ethiopia’s capital as residents were told to arm themselves in preparation for battle.

The Tigrayan People’s Liberation Front (TPLF) have reportedly seized two key cities on a major highway to Addis Ababa, sparking panic in the cosmopolitan city which has so far been spared in the brutal year-long war.

On Tuesday officials ordered the five million residents to procure any weapon they could and be ready to defend their neighbourhoods.

“All residents must be organised by blocks and neighbourhoods to protect peace and security in their home area in coordination with security forces,” said Kenea Yadeta, chief of the city’s Peace and Security Administration Bureau.

Abiy Ahmed, Ethiopia’s Nobel Peace Prize-winning President, last year sent the federal army into Tigray in a bid to crush the powerful regional government, which has ruled the whole of the country for much of the past three decades.

But the TPLF, Tigray’s military force, has staged a stunning counter-offensive after initially being beaten back into the mountains.

Mr Abiy’s government has denied claims that the TPLF have made significant territorial gains. A tsunami of fake news, reporting restrictions and frequent communication blackouts make it difficult to confirm events on the ground.

But on Tuesday, the government declared a national state of emergency, indicating the situation was more severe than they were admitting and that the rebels now posed a real threat to the capital.

The US Embassy in Addis Ababa said it “strongly” suggested that US citizens “seriously reconsider” travel to Ethiopia and told those in the country to consider making preparations to leave. Half a dozen residents of Addis Ababa said there was a growing sense of panic in the city.

“I could not still believe this has happened. I could not believe the fall of the cities and the rapid advance of the rebels to Addis Ababa,” said another ethnic Amhara resident, referring to the cities of Dessie and Kombolcha on the A2 highway, which reportedly fell to rebels over the weekend.

“The government was lying to us. We are just learning from distant relatives who fled here about the reality. So many of our brothers have died. [Prime minister] Abiy has lost it.”

All of the residents interviewed said that only a few people were adhering to the government call to muster militias.  Mr Abiy’s once-powerful federal army has suffered considerable losses in the conflict at the hands of the TPLF’s hardened guerrilla fighters.

In November 2020, Mr Abiy joined forces with Eritrea’s dictator Isaias Afwerki to crush the heavily armed Tigray regional government in a pincer movement. Since then, tens of thousands have been killed, and millions pushed to the brink of famine and both sides accused of horrendous human rights abuses.

Ethiopian and Eritrean national forces have been accused of a dizzying array of war crimes, ranging from ethnic cleansing, gang rape and famine.