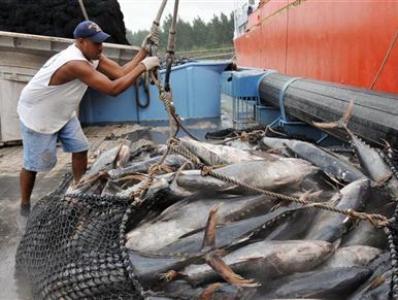 Essien, a 28-year-old Ghanaian fisheries observer, was working on board the Chinese trawler Meng Xin 15 when he captured video of the crew engaging in saiko, a practice in which a catch is transferred from a trawler to a large canoe.

The illegal catch then is sold to local communities for profit, but authorities are unable to trace the origin of the fish.

Two weeks after Essien took the video and made a report to local authorities, he disappeared from his cabin on the Meng Xin 15. According to the Environmental Justice Foundation (EJF), a police report found no signs of foul play related to Essien’s disappearance. But his family doesn’t expect to see him again.

“There were days he came back and said he was worried,” his brother, Bernard Essien, told the EJF. “The job of an observer is to make sure they are obeying the laws. There were times those in charge of the vessel got angry at him for doing that. They told him not to. He told me it was difficult. He wasn’t comfortable. He said it was dangerous work.”

It’s no secret that illegal, unreported and unregulated (IUU) fishing is rife in Ghana and around the Gulf of Guinea and that China – the world’s worst IUU offender, according to the Global Initiative Against Transnational Organized crime – is the main culprit in West Africa.

Foreign ownership of trawlers is illegal in Ghana, but Chinese trawlers use Ghanaian front companies to allow them to fish. According to EJF, Chinese companies finance about 90 per cent of industrial trawlers in Ghana.

IUU fishing in so rampant in Ghana that this year the country was issued a second yellow card by the European Union (EU), which determined that the country’s level of development and engagement against IUU fishing was inadequate.

Along with saiko, foreign trawlers commonly fish illegally in prohibited areas and use illegal double-netting systems to catch huge quantities of smaller fish. IUU fishing threatens the livelihoods of more than 2.7 million Ghanaians, according to the EJF, and small pelagic fish populations, such as sardinella, have plummeted by 80 per cent in the past two decades.

Analysts say there soon may be no more fish to catch. One species, sardinella aurita, already is fully collapsed, and without governmental intervention “full collapse of the fisheries is likely in well under a decade,” Max Schmid, chief operating officer of EJF, told ADF in an email.

Since the EU yellow card was issued, Schmid suggested that Ghana fully implement its laws and introduce robust transparency measures to prevent vessels from registering and fishing illegally.

“Transparency is a low-cost, highly effective means to tackle illegal fishing, improve accountability and support meaningful participation in decision-making,” Schmid said. “Simple measures that Ghana can take today include regularly publishing fishing license lists and punishments for illegal fishing — where the true ‘beneficial’ owners are clear in both cases.”

Essien’s disappearance underscores the harsh realities of the dangers faced by Ghanaians who risk their lives for brutal work and meagre pay on foreign trawlers.

Fishing is one of the world’s most dangerous professions, but Ghanaian workers anonymously told EJF that they commonly suffer from physical abuse, lack of drinkable water, occasional 24-hour workdays and lack of medical treatment on board.

The EJF says it is imperative that fishing-based businesses, including seafood importers in the EU and other markets, scrutinise their supply chains to eradicate abuse and illegal fishing.

The EJF and the National Union of Seamen, Ports and Allied Workers have alerted Ghana’s Fisheries Commission of human rights abuses aboard foreign trawlers and are working to ensure fair labour contracts.

Ghana’s government should adopt a “rights-based approach” to fisheries management by prioritising the needs of small-scale fishing communities that often are “marginalised in decisions concerning their livelihood,” Schmid said. That includes improving the sector by reducing fleet capacities, reforming subsidies, adopting key international treaties and developing alternative means of employment for those in the fishing industry.

“Each of these steps would not only address IUU and sustainable fishing but also help prevent human rights abuses,” Schmid said.