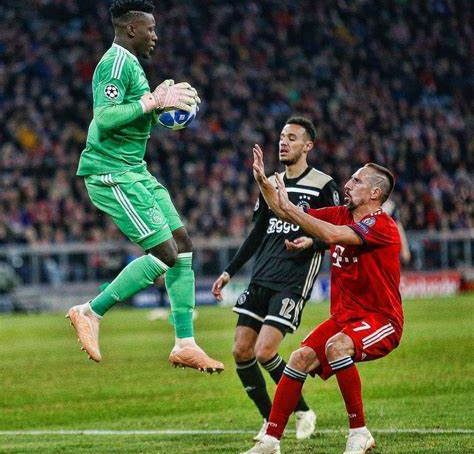 Ajax goalkeeper and Arsenal transfer target Andre Onana has revealed that he has 15 offers on the table over his playing future.

The 25-year-old is currently in a state of limbo as he serves the final two months of his doping ban. Indeed, the Cameroon international was hit with a suspension after he mistakenly took his wife’s medicine.

Onana originally faced 12 months out following the decision in February. However, the Court of Arbitration for Sport reduced his suspension to nine months. As such, he can play again from November. At this stage, though, he looks unlikely to be playing for much longer at Ajax.

Onana is in the final year of his contract and will be available on a free transfer next summer. Still, Ajax could yet sell him in a cut-price deal in January.

Reports have claimed that Arsenal are among the clubs showing interest. They signed England hopeful Aaron Ramsdale in August, but Bernd Leno’s future looks increasingly uncertain.

Speaking to De Telegraaf, Onana opened up on his situation at Ajax and attempts to get a new contract.

“In 2019, I extended my contract until the summer of 2022 and after the Champions League semi-final. I said I was open to an even longer contract,” he said.

“[Ajax chief executive] Edwin van der Sar and [director of football] Marc Overmars decided not to go into that, because that transfer period or the summer after that would be time for me to take a new step. After the start of the corona pandemic and because of my suspension, the club still wanted to meet. I understood that. My agent Albert Butines then had six or seven conversations and he felt we were close to an agreement.

“But at a certain point it was take it or leave it for Ajax. The club has pulled the plug. Look it up on the internet: we were open to further discussions. We haven’t heard anything from Ajax since then.”

Onana insisted that he has a “great relationship” with Ajax’s club chiefs and is open to a new contract. However, he added that a new contract is “not in my hands” and that “Ajax must do what is good for Ajax”.

As for where Onana could go next, he opened up on a failed move to French club Lyon this summer.

He had “many conversations” with the Ligue 1 club’s manager, Peter Bosz, but ultimately could not find an agreement. Onana also held talks with Nice. He added: “There are fifteen clubs that want me on a free transfer in the summer of 2022. Rumours that I already have an agreement with another club are not true.

“Isn’t it logical that I first offer Ajax the chance to start the conversation? Albert Butines will soon be coming to Amsterdam and then I’ll hear about it. I just want to focus on my return. But anything is possible. Let Ajax and my agent quickly sit down and see what happens.”

Arsenal reportedly plan to shift their German goalkeeper Leno either in January or next summer, as they do not want to lose him for free in 2023, the final year of his contract.