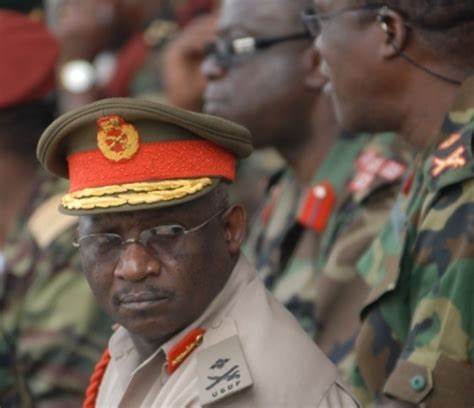 Eswatini’s army commander, General Jeffrey Shabalala, abruptly resigned on Monday after a police sergeant friend of his released secret audio recordings of him allegedly plotting to kill a newspaper editor.

In the recordings, Shabalala can also be heard revealing that King Mswati III had put pressure on security forces to arrest three dissident MPs – even as the Swazi government insists the legal system operates independently of the government executive.

Shabalala was probably instructed to resign by Mswati to avoid further embarrassment to the king, Swazi observers said. What the married general did not know when he was revealing damaging state secrets to his friend in April and July this year was that the friend, Sergeant Cebile Shongwe, was an undercover agent for the Swaziland News, an online investigative newspaper.

In the secret recordings she made of their conversations, Shabalala can be heard speaking to a woman in siSwati. The woman was Shongwe, Zweli Martin Dlamini, the editor of the Swaziland News, told Daily Maverick.

His death would be made to look like an accident. The recording, made in July, also captures Shabalala revealing to Shongwe how Mswati had put pressure on police to arrest three MPs: Bacede Mabuza, Mthandeni Dube and Mduduzi Simelane.

Shabalala tells Shongwe that Mswati had complained to his security commanders that the police had arrested and charged an off-duty policeman who shot dead a man who was criticising Mswati in a bar.

In the recording, Shabalala says Mswati asked his commanders how they could arrest this man without a hearing when he was defending the king’s good name — yet they kept offering excuses not to arrest the three dissident MPs.

The three MPs had called for the country’s prime minister to be elected and not appointed by the king. Their campaign for greater democracy in this authoritarian absolute monarchy helped fuel political protests in June. These spiralled into violence and rioting which destroyed extensive property and provoked a violent security force response in which scores of protesters were shot dead.

Later in July police did arrest Mabuza and Dube and issued an arrest warrant for Simelane, but he had already fled into exile.

Swaziland News editor Dlamini told Daily Maverick on Monday that the recording revealed that the country’s judicial system is actually controlled by the king. He said that Shabalala had stated at the press conference announcing his resignation that he was doing so to avoid further revelations and exposure. Dlamini said the government had at first denied his newspaper’s reports about what Shabalala had told Shongwe. Their attitude changed after the paper produced the recordings.

“I was told the army commander was fired by the king after we released the electronic evidence that exposed King Mswati’s secrets. This included the plot to arrest the pro-democracy MPs and assassinate the editor [Dlamini].”

Dlamini said Shongwe had recorded two conversations with Shabalala in April and in July.  Asked why an army general would reveal such damaging information to a mere police sergeant, Dlamini replied that, “The sergeant was our undercover investigator to collect information.”

Dlamini has revealed that Shongwe resigned from the police on August 13 and fled the country before being revealed as the whistle-blower. In a weekend story, he said Shongwe had told him she decided to resign and skip the country so she could share more evidence with the international community.

“I cannot continue working for a government that kills people. The national commissioner claims that just over 30 people died when in fact the number is over 100,” she was quoted as saying, referring to the June protests and riots.

“The truth is being hidden. A soldier allegedly threw 14 protesters into a fire, alive, at Matsapha Brewery during the protest,” Dlamini quoted Shongwe as saying.