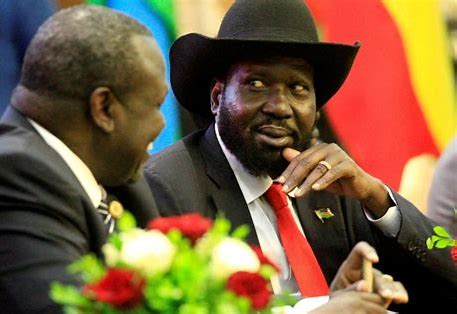 Many political leaders and civilians in South Sudan are “deeply sceptical” a 2018 peace agreement can deliver stability to the world’s newest nation and worry it may be heading back into conflict, UN experts said in a report circulated Monday.

The experts pointed to political disputes between former rivals now leading the government — President Salva Kiir and Vice President Riek Machar — that have gridlocked much of the peace deal they signed more than three-and-a-half years ago.

“Almost every component of the peace agreement is now hostage to the political calculations of the country’s military and security elites, who use a combination of violence, misappropriated public resources and patronage to pursue their own narrow interests,” the report said. “Far from delivering transformational change to the predatory political system of South Sudan, the peace agreement has itself become a lucrative venue for elite power politics.”

In the report to the UN Security Council, the panel of experts monitoring sanctions on South Sudan said warnings about the agreement’s prospects from civilians and many political, military and civil society leaders have grown more urgent as the unity of key opposition signatories “has frayed” and outside deals have proliferated.

There were high hopes when oil-rich South Sudan gained independence from Sudan in 2011 after a long conflict. But the country slid into civil war in December 2013 largely based on ethnic divisions when forces loyal to Kiir battled those loyal to Machar.

Tens of thousands of people were killed in the war, which ended with the 2018 peace agreement that brought Kiir and Machar together in a government of national unity. But challenges remained, including the government’s failure to implement promised reforms.

The panel of experts pointed to some progress in implementing the peace deal, including reconstituting the Transitional National Legislature last September and the Public Financial Management Oversight Committee bringing some transparency to South Sudan’s “opaque public finances.”

After the 77-page report was drafted in March, Kiir and Machar signed an agreement on April 3 to unify the command of the security forces, a key element of the peace agreement that eased political tensions. Clashes between government troops and forces loyal to Machar in the days preceding the signing had raised the threat of another outbreak of serious fighting.

The panel of experts, nonetheless, was sharply critical of “the zero-sum political calculus at the heart of the national political process.”

They pointed to government officials successfully getting at least a dozen opposition senior commanders to defect, clashes between loyalists and defectors including over access to bases, weapons and lucrative assets such as checkpoints and river ports, and deadly violence outside the capital, Juba, fuelled by regional and local rivalries and animosities.

Tens of thousands of civilians have been displaced and serious human rights abuses including sexual and gender-based violence have “become a tragic hallmark of the conflict in South Sudan,” the report said.

“There is little optimism left in South Sudan,” the experts added. “Panel interviews revealed a prevailing mood of frustration, mistrust and disillusionment with a political process held hostage to elite interests while increasingly detached from the lives of ordinary people.”

The panel said achievements in implementing the peace agreement “remained largely procedural and bureaucratic,” while the fragmenting opposition, ceasefire violations and widespread violence in the regions undermined its key tenets.

“Many civilians and political leaders with whom the panel spoke expressed a concern that the country may be heading back towards conflict,” the report said, citing interviews with confidential sources and civil society leaders in March.

The panel said conditions for millions of civilians “are getting worse,” saying violence, floods and displacement have created “unprecedented levels of food insecurity across much of the country.” It cited the UN World Food Program’s warning in March that South Sudan was facing its “worst hunger crisis ever,” with some 8.3 million people needing food and 1.4 million children “acutely malnourished” as of December.

The experts said the government’s purchase of approximately 25 new armoured personnel carriers for the police, shown in a March photograph, was a violation of the UN arms embargo.

The arms embargo expires May 31 and the panel recommended that the Security Council extend it because of “persistent ceasefire violations” and intensifying violence in the regions. The council is expected to vote May 26.

Military budgets shoot up as Kenya, Uganda and Angola top Africa against backdrop of terrorism, extremism