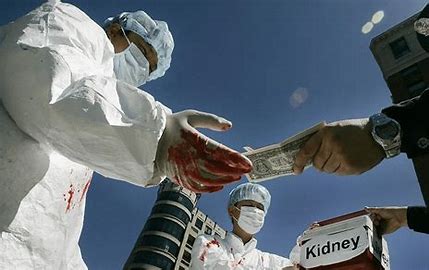 Trafficking in human beings for organ removal (THBOR) – a worldwide illicit occurrence – has reached phenomenal levels in North and West Africa, according to International Police (Interpol).

Interpol links the phenomenon to impoverished communities and displaced populations, which the agency says are at “greater risk of exploitation.” The Lyon-headquartered (France) organisation that has presence in 194 countries in the world, says in a report released on Friday October 22, 2021, that increased migration in the two regions has made people looking for greener pastures in foreign countries more vulnerable.

The report says there are ready markets for human organs in the Maghreb, Middle East, Europe and Far East. The most traded body parts are kidneys, liver and heart, according to the report that also links hospitals and other medical amenities the said regions to trafficking in human organs.

The report appeals to law enforcement agencies in North and West of Africa to devise new and appropriate responses to arrest the illicit trade. Organised crime groups in the region are doing booming business trafficking in human beings for organ removal, which the report says has higher and quicker returns that agriculture.

“Information suggests there is a wide spectrum of people involved in organ trafficking in north and west Africa with connections to the medical sector in Africa and beyond, notably Asia and the Middle East,” Interpol report says.

“The report shows probable links between transplant tourism – where a patient travels to buy an organ for illegal transplant – and THBOR in North and West Africa. Either in the context of transplants done in North Africa with organs illegally sourced in the region or transplants elsewhere with illegally sourced organs from northern and western African nationals,” Interpol says.

“Organised criminal gangs profit from the desperation of the unemployed, migrants, asylum seekers and refugees and coerce them into selling organs. Victims of human trafficking for sexual and labour purposes are also at risk.

“Techniques used for recruitment and control of victims are the same as those used in other human trafficking, including promises of job opportunities abroad, as well as threats and violence.

“Victim donors often receive smaller amounts of money than agreed with the recruiter or broker and in some cases, they may not get any of the promised payment. Many victim donors suffer post-operative complications and health issues.”

The report points out the socio-economic impact of Covid-19 is expected to “fuel” THBOR further as it will be easier for brokers to coerce vulnerable individuals to improve their economic conditions by selling organs. Exacerbated this is legal organ donations and transplants decreased significantly since the outbreak of Covid-19.

“Trafficking in human beings for organ removal is not a new phenomenon. It is under-reported because of the clandestine nature of the crime, combined with a lack of awareness by law enforcement agencies and a deficiency of information sharing channels between medical and police sectors,” Cyril Gout, Interpol director for operational support and analysis, said.