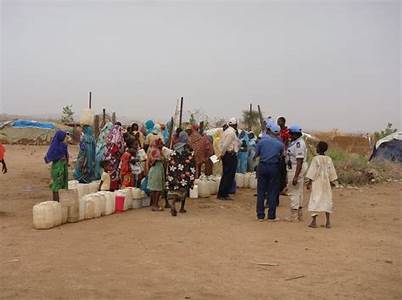 The night after he watched government-allied forces burn his village to the ground, Dhoal Gatwich Gatjani gathered his family and started walking north. He had heard that a United Nations base was offering protection.

As civil war devastated the country in the years that followed, Gatjani and his family were among the 108,000 people who built a life in what became South Sudan’s largest camp for internally displaced people. Inside the barbed-wire fences of the camp in Bentiu, UN soldiers in guard towers provided a measure of comfort.

Then one day in May this year, nearly seven years after he arrived, Gatjani looked up and saw that the towers were empty – the UN troops were gone, unable to guard the maze of shelters indefinitely. Replacing them, he soon learned, would be a new police force made up of officers loyal to the two political parties whose fighting had led him here: both the one that he supported, and the one that had sent him running for his life.

“Those who displaced us, who burned down our villages,” the 40-year-old father said, “are the ones who are now supposed to be protecting us?”

As South Sudan marks the 10th anniversary of its independence, the world’s youngest country is at a crossroads. Violence remains so entrenched, even though the civil war technically ended in 2018, that Gatjani is among 1.6 million people who have been internally displaced, with 2.3 million more in neighbouring countries.

Frustrated by the lack of progress in a country where two-thirds of residents rely on humanitarian aid, the international community is reassessing the amount of help it can give South Sudan. Donor countries, hit hard by the coronavirus pandemic, have decreased funding, and UN protection forces have shifted from displacement camps to the country’s conflict hot spots.

Lawmakers in Washington are calling for an overhaul of US policy on South Sudan, which receives about $1 billion in US aid annually.

The experience of residents in the Bentiu camp may offer a preview of what will happen to the vulnerable as foreign support is withdrawn. Slashed food rations meant Gatjani started eating one meal a day so his children could have two. The deterioration of latrines meant he and his family started using sewage-filled channels. The departure of the UN forces meant they do not leave their hut after dark.

South Sudan’s government would like to see the camps close, said Deputy Foreign Minister Deng Dau Deng Malek, because officials believe that cooperation between President Salva Kiir and Vice President Riek Machar – the same two men who plunged the country into civil war – should engender the confidence residents need to return to their villages.

But he acknowledged that people could remain in the camps for years, stymied by what he described as a mixture of dependence and genuine fear.

Sitting outside his shelter, covered by a faded UN tarpaulin so old it no longer keeps out the rain, Gatjani put it like this: “I am not happy here,” he said. “But I do not want to die outside.”

Gatjani was among the more than 98 per cent of people in what is now South Sudan who voted in 2011 for independence from Sudan, breaking the nation in two after generations of conflict between the mostly Black Christian south and mostly Arab Muslim north.

The farmer from the village of Nhialdiu hoped that independence would bring roads, schools and hospitals. But this land roughly the size of Texas ranked then as one of the world’s least developed nations and still today is near the bottom of the list.

The move for independence was backed by a bipartisan coalition of lawmakers on Capitol Hill and first by the George W. Bush administration, which championed the peace deal that led to the independence referendum, and then by the Obama administration.

It was Vice President Joe Biden who in 2010 was charged with convincing African leaders that the referendum should go ahead.

Peace did not last long. By the end of 2013, fighting in Juba, the capital, between forces loyal to Kiir and Machar had erupted. Their respective tribes – Dinka, the largest, and Nuer, the second-largest – had long clashed over resources including land and cattle.

The fighting quickly spread to the villages, fuelled by outside weapons that in the years that followed would be funnelled through neighbouring countries in violation of arms embargoes. An estimated 400,000 people were killed in the fighting, according to a study funded by the State Department.

Gatjani, a Nuer, was in his home in August 2014 when he heard gunshots. He ran for cover in the trees. In his absence, his wives were raped and tortured. Both survived. “Torture was the easy thing for them,” he said, compared with the sexual assaults they experienced. “The women who resisted rape were killed.”

He watched the smoke rise as his village burned. His brother and brother-in-law were fatally shot.

In Washington, officials watched in horror as violence flared again and again. Fighting led in 2017 to famine in the state Gatjani had fled, with UN agencies estimating that 100,000 people faced immediate starvation. The government was accused of blocking aid for political purposes.

Many people who sought protection from violence have been impacted by it in the camps, too. Lanewa Thomas, 24, was shot in the head by strangers inside the camp on Sept. 24. He is being treated at a Doctors without Borders hospital that serves the camp. His father said security in the camp has deteriorated since UN forces left.

Today, violence is still widespread, with the UN Commission on Human Rights in South Sudan saying “staggering levels” in several regions threaten to spiral out of control.