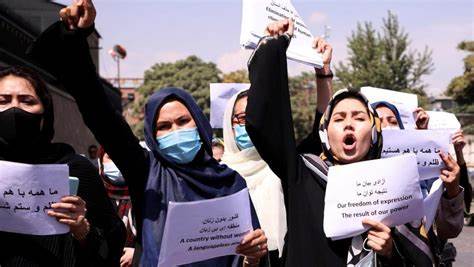 Taliban mullahs replace women ministry with that of Guidance, Promotion of Virtue and Prevention of Vice

Workers in the Afghan capital Kabul replaced signs for the country’s women’s ministry with those for the Taliban’s moral police on Friday, as female former employees of the department said they had been locked out of the building.

A sign for the building was covered by a replacement in a mixture of Dari and Arabic, reading “Ministries of Prayer and Guidance and the Promotion of Virtue and Prevention of Vice” on Friday, according to photographs and Reuters witnesses.

Female employees said they had been trying to come to work for several weeks only to be told to return to their homes, according to videos filmed outside the building seen by Reuters. The gates of the building were finally locked on Thursday, one of the women said.

“I am the only breadwinner in my family,” said a second woman, who also said she worked in the department. “When there is no ministry, what should an Afghan woman do?”

Taliban spokesmen did not respond to requests for comment on Friday. When the Taliban, who seized control of Afghanistan last month amid the chaos following the withdrawal of US troops, were last in power from 1996-2001 girls were not allowed to attend school and women were banned from work and education.

During that period its Ministry for Promotion of Virtue and Prevention of Vice became known as the group’s moral police, enforcing its interpretation of sharia that included a strict dress code and public executions and floggings.

A list of cabinet posts announced by the Taliban on September 7 included an acting minister for the promotion of virtue and prevention of vice and made no mention of a women’s minister, but the group did not confirm the department had been disbanded.

A senior Taliban leader said earlier this week that women would not be allowed to work in government ministries with men.

‘Only the sovereign people of Guinea will decide its destiny’, defiant Guinea ruling junta tells off critics