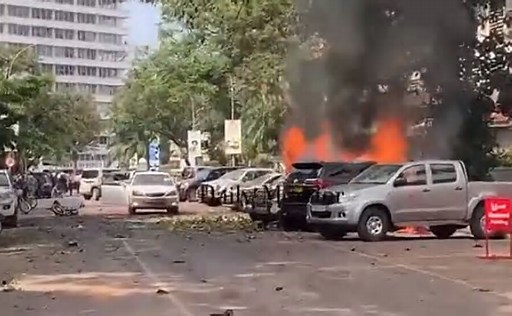 Witnesses said one blast happened near a police station and another along a street near the parliamentary building. That blast appeared to target a building housing an insurance company, and the subsequent fire engulfed cars parked outside.

Some lawmakers were seen evacuating the precincts of the parliamentary building nearby, according to national broadcaster UBC.

An NTV Uganda reported that “scores” had been injured and that there had been two blasts – one very close to parliament and another near the central police station. Parliament was being evacuated, the television station reported.  An NTV Uganda reporter said he saw two bodies. The cause of the blasts was not immediately clear.

An eyewitness video posted online showed a plume of white smoke rising from the blast scene near the police station.

Police did not immediately comment, and it was not clear if the explosions were bomb attacks. There was no word on casualties.

“First responders included Red Cross personnel who were using fire extinguishers to curb the fire on Parliamentary Avenue,” the station said in on Twitter.

Ugandan officials have been urging vigilance in the wake of a string of bomb explosions in recent weeks.

One person was killed and at least seven others wounded in an explosion at a restaurant in a suburb of Kampala last month, October 23. The Allied Democratic Forces, an affiliate of the Islamic State Group in central Africa, claimed responsibility for that attack.

The group has long been opposed to the rule of longtime President Yoweri Museveni, a U security ally.

Last month, Islamic State made its first claim of responsibility for a blast in Uganda. That bomb – packed with shrapnel – killed a waitress at a restaurant.

Also last month, Ugandan police said a suicide bomber had exploded on a bus, killing himself and injuring others.

Another explosion two days later on a passenger bus killed only the suicide bomber, according to police.

Even before those attacks, the UK government had updated its Uganda travel advisory to say extremists “are very likely to try to carry out attacks” in this East African country.