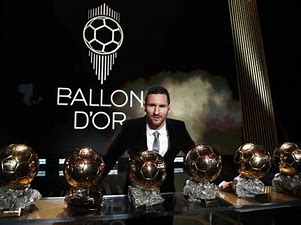 The 34-year-old ended his long wait for a major international trophy by helping Argentina win the Copa America in July, while he also won his seventh Copa del Rey trophy before leaving the Nou Camp in August.

The award, presented by French magazine France Football to crown the best player in the world, was not handed out last season because of Covid disruption to the football calendar but Messi also took home the prize in 2019.

Messi and long-term rival Cristiano Ronaldo have now shared 12 of the last 13 Ballon d’Or trophies, with Real Madrid midfielder Luka Modric the only man to have broken their duopoly. The first men’s Ballon d’Or was awarded in 1956.

“I would like to thank my family, my friends and all the people who follow me and always support me, because without them I couldn’t have done it.

“Today I’m here in Paris. I am very happy, really very happy, I really want to continue to fight and reach new objectives.

“I don’t know how many more years but I am really enjoying myself. I thank my team-mates at Barcelona, Paris and Argentina.

“[To Lewandowski], you deserve your Ballon d’Or. Last year, everyone was in agreement to say that you were the big winner of this award.”

There were 14 Premier League players on the 30-strong shortlist for the men’s award, including four – Jorginho, N’Golo Kante, Mason Mount and Cesar Azpilicueta – who helped Chelsea win the Champions League in May.

Four England players – Mount, Phil Foden, Harry Kane and Raheem Sterling – were also in the running after helping the national side to a first major final in 55 years at the Euros this summer.

Barcelona starlet Pedri won the Kopa Trophy for best U21 player ahead of the likes of Bukayo Saka, Jude Bellingham and Mason Greenwood.

While Lewandowski missed out on the main award, he was named the Striker of the Year after finishing as the top goal scorer in Europe’s top domestic leagues with 41 Bundesliga goals.

Gianluigi Donnarumma won the Yashin Trophy for the Goalkeeper of the Year after starring in Italy’s successful Euro 2020 campaign and thriving for AC Milan before joining PSG over the summer.

European champions and current Premier League leaders Chelsea were crowned the Club of the Year, the first team to win that trophy.

Chelsea manager Thomas Tuchel said, “It’s a nice trophy because it’s for the club. We have a very successful women’s team and academy. We’re happy to have this award. We had a lot of players nominated.”