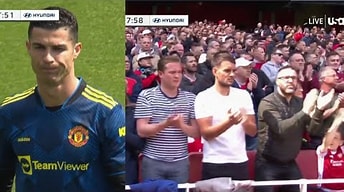 Manchester United have thanked Arsenal fans for their show of support for Cristiano Ronaldo following the tragic death of his baby son.

The United striker and his partner Georgina Rodriguez were expecting twins, but announced earlier this week that their baby son had died during childbirth, while their daughter survived.

Ronaldo subsequently missed the Premier League game against Liverpool on Tuesday after being granted compassionate leave.

United and Liverpool fans came together at Anfield as they held a minute of applause to show support for Ronaldo and his partner.

In response, Ronaldo posted a message of thanks, which read: ‘One world… One sport… One global family… Thanks, Anfield. Me and my family will never forget this moment of respect and compassion.’

Ronaldo made his comeback on Saturday as United travelled to the Emirates Stadium for a pivotal clash in the race for fourth place.

As their Liverpool counterparts did in midweek, Arsenal’s support rose as one in the seventh minute, Ronaldo’s shirt number, to show their support.

United acknowledged the gesture on Twitter with a message which read: “A classy gesture from Arsenal supporters, with applause for @Cristiano in the seventh minute.”

It was, however, a miserable start to the afternoon for the United forward as the Gunners raced into a 2-0 lead thanks to goals for Nuno Tavares and Bukayo Saka.

Ronaldo, however, hauled his ailing side back into the contest in the 33rd minute, poaching at the far post to register the 100th goal of his Premier League career.

Arsenal fans were keen to salute Ronaldo in the 7th minute of the match after announcing the death of his infant child after his girlfriend Georgia gave birth to twins, a boy and a girl, the boy died and the girl survived.

The behaviour of the Arsenal fans, after the human gesture made by the Liverpool fans, during his match with Manchester United, where they saluted Ronaldo, who was absent from the meeting, and chanted his name as a form of support and support after the loss of his infant son.

It is worth noting that Arsenal defeated United by three goals to one, and Cristiano Ronaldo scored the goal of Manchester United.