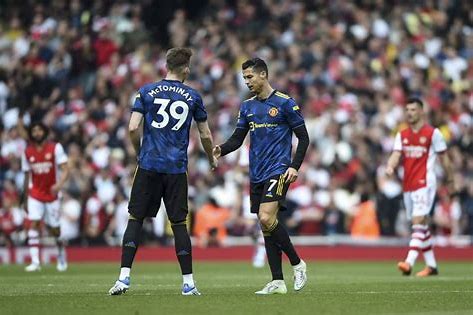 Cristiano Ronaldo reached 100 goals in the Premier League but was outshone by Arsenal star Bukayo Saka as the Gunners beat Manchester United 3-1 at home.

Arsenal took the lead just three minutes in. Raphael Varane and Alex Telles failed to deal with a cross, allowing Saka to force a good save from David de Gea. Unfortunately for Manchester United, Nuno Tavares was there to tap home at the back post.

United then had good chances through Anthony Elanga and Bruno Fernandes but couldn’t draw level, before Diogo Dalot hit the crossbar with a long-range effort.

However, it was Arsenal who bagged the next goal. Telles brought Saka down in the box, and after a lengthy VAR delay, the referee gave the penalty. Saka stepped up to net his second spot-kick in as many games.

United had something to say before the first half was up. Nemanja Matic whipped in a cross to the back post and Ronaldo was there to finish, marking his 100th Premier League goal in the process.

United had a great opportunity to get level after the interval. Matic rose to meet a corner and headed it onto Nuno Tavares’ arm, forcing the official to give another spot-kick. Fernandes missed it though, summing up a poor day for the Red Devils.

Granit Xhaka then hit a stunning strike from distance to restore Arsenal’s two-goal cushion and ensure all three points remained in north London.

The result sends Arsenal above Tottenham and into fourth, before their rivals play Brentford on Saturday evening. United, meanwhile, remain in sixth and are now six points behind the Gunners.

Ronaldo returned from compassionate leave to make it 100 league goals and 21 for the season. But Saka helped Arsenal get two goals, meaning he picks up a very good rating…

Aaron Ramsdale: Sloppy in possession when playing out from the back, putting United on the front foot. Also made a few good saves to atone for his errors while on the ball. The best of those came in the second half when he brilliantly tipped Dalot’s shot onto the post. 7

Cedric Soares: Nervous in possession at times, a bit like his keeper. Lacked the pace to keep up with Sancho but importantly stopped the winger from scoring or assisting. 6

Ben White: Arsenal’s best defender on the day – dealt with most things that came his way. Also comfortable when playing out from the back, unlike some of his team-mates. 7

Gabriel: Put in a great last-ditch tackle to prevent Fernandes from scoring in the 11th minute. Reacted slowly to Matic’s cross though, allowing Ronaldo to score past Ramsdale. 6

Nuno Tavares: Eventful day for the left-back. Showed good awareness to react first from de Gea’s save and put Arsenal in front. Showed the opposite at the other end though when he failed to communicate with Gabriel for Ronaldo’s strike. Booked in the 68th minute for a pull on Elanga’s shirt after the winger got away from him. Then stupidly gave away a penalty for a handball and was thankful to see Fernandes miss it. 5

Mohamed Elneny: Another assured performance from the Egyptian. Did well to win the ball back for the home side before setting up Xhaka’s goal. Unlucky to be hooked in the 79th minute. 7

Granit Xhaka: Dangerous first-time cross from the 29-year-old which caused Varane and Telles problems and ultimately helped Tavares to score. Booked in the 67th minute for smashing the ball away after a free-kick, in typical Xhaka style. Minutes later he was the hero, sending a vicious left-footed strike past de Gea. 8

Bukayo Saka: Sent a curling effort at goal early on and that allowed Tavares to convert the rebound. Appeared nervous before his penalty but went on to direct it right into the bottom corner and send de Gea the wrong way – great finish. His involvement in those two goals was integral to Arsenal picking up the three points. Went off with a thigh injury in the 74th minute, which will be a major worry for Arteta. 9 – Man of the Match

Martin Odegaard (C): Nice little chip from the skipper to play in Saka, who then drew the penalty from Telles. Always looked to play a forward pass and enjoyed his day at the Emirates. 8

Emile Smith Rowe: Quiet for large periods of the game as Arsenal mainly went through Saka and Odegaard when attacking. Didn’t have as much impact on the game as he would have been hoping for. 6

Eddie Nketiah: Kept Varane and Lindelof busy at times with clever runs into the penalty area. Impact on the game waned though, with Arsenal’s main threat coming from Odegaard and Saka. 6

Gabriel Martinelli (on for Smith Rowe, 75): Came on to tire the United defenders but didn’t get on the ball too often in the final stages. 6

Rob Holding (on for Saka, 74): Replaced Saka after the starlet’s injury and helped to shore things up in defence. 6

David de Gea: Spaniard did well to keep Saka out in the third minute and was unlucky to see Tavares react first and score. Reliable as ever in the United net and pulled off a few more good saves on the day. 8

Diogo Dalot: Caught napping at the back post when Tavares raced past him to bag the opener. Then struck the Arsenal crossbar with a great dipping effort from range, before hitting the post when being sent through by Ronaldo. 6

Victor Lindelof: Booked in the latter stages for fouling Nketiah. Defended well for large parts but ultimately on the losing side. 6

Raphael Varane: Experienced centre-back should have dealt with the initial cross in the build up to Arsenal’s goal. Instead he tamely swung a leg out, completing missing the ball. A crucial mistake which set Arsenal on their way to getting all the spoils. 5

Alex Telles: Like Varane, reacted poorly to the early cross when he should have cleared, helping Arsenal to take the lead. Then clumsily fouled Saka in the box, gifting the home side a penalty and Saka a goal. Booked in the 31st minute for protesting against the penalty. 5

Scott McTominay: United are clearly better with his energy in midfield, but this was not one of his better performances in the famous red shirt. Failed to properly support Fernandes and Ronaldo like he would have been hoping. 6

Nemanja Matic: Clever first-time cross from the veteran midfielder to give Ronaldo the opportunity for his goal. Did well to win the header and get United a spot-kick – only for his captain to miss it. 7

Anthony Elanga: Lively in the first 20 minutes and managed to get in behind the Arsenal defence a couple of times. Tired as the game went on though and was replaced by Lingard later on. 6

Bruno Fernandes (C): Had a great chance to score for the visitors after a Ramsdale mistake. But his chipped effort was well blocked by Gabriel. Sent his penalty against the woodwork when he really should have scored to drag United level. Booked with 14 minutes left for a bad challenge on Tavares. 4

Jadon Sancho: Demonstrated nice footwork prior to United’s 34th-minute goal. Just needs to be more clinical in the final third to make his mark on games. 7

Cristiano Ronaldo: Started well, playing in Elanga for United’s first real chance in the sixth minute. Kept the Arsenal defence busy and got a landmark 100th Prem goal to give the Red Devils a lifeline. Showed fantastic movement to get between Gabriel and Tavares before finishing at the back post. Alongside de Gea, one of United’s better performers on a poor day. 8

Marcus Rashford (on for Matic, 77): Had no real impact when coming off the bench. 5

Jesse Lingard (on for Elanga, 77): Like Rashford, couldn’t create much as Arsenal held firm in the final 13 minutes. 5