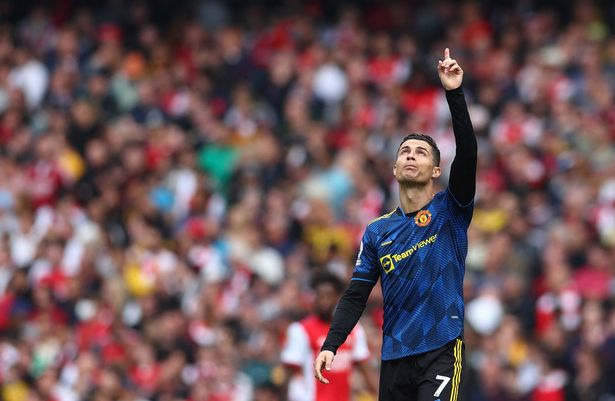 Cristiano Ronaldo received a warm reception from Arsenal fans as he returned to action for Manchester United following the devastating death of his baby son.

The Portuguese striker was cheered by Gunners fans upon emerging from the tunnel to warm-up for Saturday lunchtime’s Premier League clash and responded by applauding supporters. Other supporters could be seen holding a banner which read, “Ronaldo, sorry for your loss,” with a heart.

Fans inside the Emirates joined together in an applause in tribute during the seventh minute of the fixture, before Ronaldo then got on the scoresheet to pull a goal back for United in the 34th minute and celebrated by pointing to the sky in a touching gesture to his late son.

Ronaldo and his partner, Georgina Rodriguez, announced the heart-breaking news of their Newburn’s passing in an Instagram statement on Monday. The couple had been expecting twins and said: “Only the birth of our baby girl gives us the strength to live this moment with some hope and happiness.”

Understandably, Ronaldo was not available for Tuesday’s 4-0 defeat at Anfield, where Liverpool fans sung a moving rendition of their anthem, ‘You’ll Never Walk Alone’, and held a minute’s applause in tribute to him. However, he returned to United’s Carrington training ground on Wednesday and interim manager Ralf Rangnick confirmed he was in contention for the trip to the Emirates.

United quickly found themselves two goals behind, however, following Nuno Tavares’ opener for Arsenal followed by a Bukayo Saka penalty. Ronaldo then expertly turned home Nemanja Matic’s cross to pull United back in it.

Bruno Fernandes was then given the chance to bring United back level in the second half but struck his own penalty off the foot of the post, before Granit Xhaka scored a long-range thunderbolt to seal the points from Arsenal.

Despite the defeat, the tribute received from the Arsenal faithful will have meant a lot to Ronaldo and Rodriguez, as the former personally thanked Liverpool supporters for their minute’s applause in midweek. He shared a clip-on Instagram and wrote: “Thank you all”.

Ahead of the fixture in North London, Arsenal boss Mikel Arleta praised Liverpool fans for their “exceptional” gesture, so he will have been pleased to see his side’s followers put rivalries aside by showing similar class.

“I don’t think I’m allowed to talk about something like that because unless you experience it you cannot be on the same level to express or to go through the pain,” Arteta said of Ronaldo’s tragic loss. “What this country and league have shown with what happened at Anfield the other day I think is exceptional.

“Sports should be leading to find some unity at the human level that sometimes is missing. It was a great example and something to be really proud to be participating in a league where some clubs and people involved in this sport are able to show such a thing.”

On Thursday, Ronaldo shared the first picture of his new-born girl and Rodriguez alongside children Cristiano Junior, Eva, Mateo and Alana Martina. “Home sweet home. Gio and our baby girl are finally together with us,” the former Real Madrid and Juventus star wrote.

“We want to thank everyone for all the kind words and gestures. Your support is very important and we all felt the love and respect that you have for our family. Now it’s time to be grateful for the life that we’ve just welcomed into this world