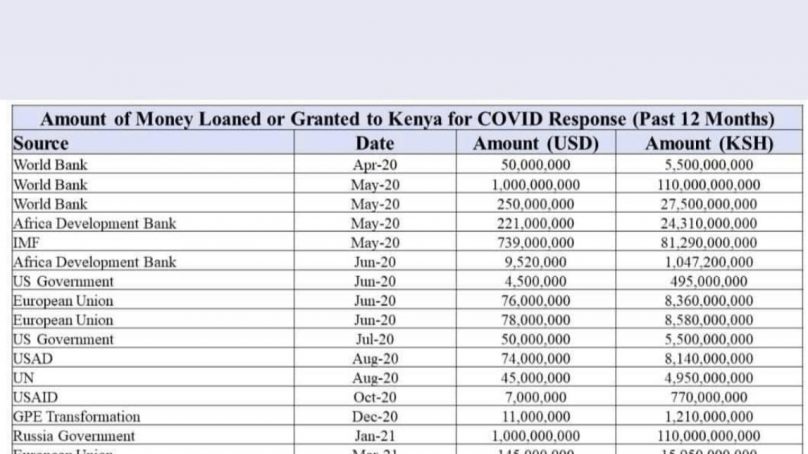 Kenya has come under intense international scrutiny following claims that President Uhuru Kenyatta’s government cannot account for more than $6.4 billion (Ksh704 billion) received from international creditors and donors to mitigate the impact of coronavirus, which has so far claimed more than 5,500 lives as the country grapples with some 20,000 active cases.

Kenya goes to the polls on August 9 this year, but the country’s foreign and domestic debts have been a matter of serious national debate as the electorate will have to shoulder some Ksh9 trillion debts incurred by the Kenyatta administration, which is reluctant to express itself openly on credit facilities the president admits has been pilfered by senior officials in his government.

When the issue of Kenya’s creditworthiness was raised last year, President Kenyatta shocked the country when he admitted, “Even those talking about the cost of a referendum, I don’t know where they are getting those figures from…We are waiting for the signatures to be verified then take the process to the counties… These people don’t mislead the public that Ksh2 billion ($17.6 million) will be spent, yet what they steal every day is more than Ksh2 billion. These people are useless, and I will say it openly, how much do they spend every year? My interest is that more resources revert to the people at the grassroots.”

The president’s close family and friends have been linked to the theft of the Covid-19 funds and aware of the implication, the president’s critics accuse of him of desperation to manage his succession to hide the excesses of his regime.

The curtains come down on his reign in august this year.

Multilateral and bilateral lenders that donated the funds have now raised questions on how the money for the purchase of equipment and vaccines was spent. The donors want Kenyatta to account for the over $6.4 billion (Ksh704 billion) – 110 times above the Ksh7.8 billion loss detected by the auditor-general.

Health cabinet secretary Mutahi Kagwe is also required to respond to accountability questions raised by the donors, among them the World Bank, International Monetary Fund (IMF) African Development Bank, the United Nations through the World Health Organization (WHO), the United States of America government and the European Union.

According to disbursement schedules provided to Tell, the money was remitted to the Kenyan government between April 2020 when the World Bank disbursed the first tranche of $50 million (Ksh5.5 billion) and the last instalment made in the period under consideration in April 2021 when IMF disbursed $2.3 billion).

After that, other donors in the form of bilateral lenders, charity organisations, institutions and individuals donated $300 million (Ksh33 billion).

Even as Kenyan political elite make corruption the theme of their 2022 election campaigns, none of them is pointing a finger at how Ksh704 billion given to Kenya to save lives of millions of poor people in the form of loans and grants vanished to.

The money vanished with knowledge of senior government officials – described as kith and kin of President Kenyatta – during the time the coronavirus paralysed the economy as employers declared redundancy, as infections averaged 1,000 per day. However, new information provided by development partners point to unprecedented garrulousness in government in theft of the money meant for the purchase of personal protective equipment (PPEs) for hospitals and other essential service providers, besides laboratory equipment.

The disbursement schedules shared by the donors and human-rights activists in London provide a chronology and break-down of the $6.4 billion Kenya received, which in turn raises hard audit questions about how the funds were appropriated. There are further unanswered questions about why huge chunk of the monies were channelled through Dubai in United Arab Emirates (UAE).

After the auditor-general laid bare details of financial fiddling in September last year, a Kenyan parliamentary house committee, the Public Investments Committee (PIC), raised the red flag about the Ksh7.8 billion senior officials and board members of the Kenya Medical Supplies Authority (Kemsa) could not account for.

Consequently, PIC invited investigating agencies, the Ethics and Anti-Corruption Commission (EACC) and the Directorate of Criminal Investigations (DCI) to get to bottom of the missing Ksh7.8 billion PPE procurement scandal. Results of the investigations of former Kemsa chairman Kembi Gitura and board members Joel Onsare and former Kemsa board members are yet to be made public.

However, the new revelations that the government received more than $6.4 billion piles pressure on President Kenyatta, whose friends and close relatives have been implicated in the massive swindle of funds that would have saved over 5,500 lives since the first Covid-19 incident was detected in the country in March 2020.

According to the new report on funding to fight coronavirus, barely days after World Bank disbursed $50 million to Kenya it donated $1.25 billion in two tranches of $1 billion and $250 million in May 2020. In the same month the African Development Bank (AfDB) disbursed $220 million, while IMF gave $739 million, besides additional received from AfDB ($9.52 million), US government ($4.5 million) and the European Union ($154 million).

The following month, July 2020, Kenya received $50 million from the US government, which in the following month went up by $119 million provided by United States Agency for International Development or USAids ($74 million) and the United Nations ($45 million).

In January 2021 Russia gave Kenya $1 billion that was followed by $145 million from the European Union in March 2021. The Covid-19 kitty was further boosted with $2.34 billion, courtesy of IMF. Other than bilateral and multilateral lenders, non-governmental organisations and individuals funded Kenya’s fight against Covid with $300 million.