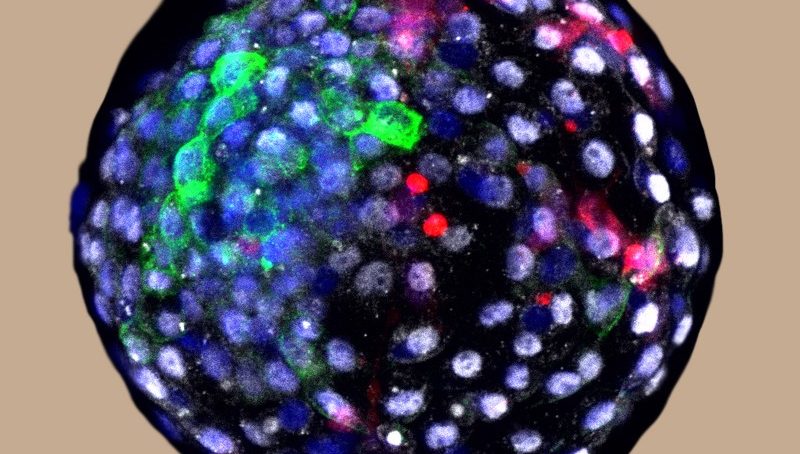 Scientists have successfully grown monkey embryos containing human cells for the first time – the latest milestone in a rapidly advancing field that has drawn ethical questions.

In the work, published on April 15 in Cell, the team injected monkey embryos with human stem cells and watched them develop. They observed human and monkey cells divide and grow together in a dish, with at least three embryos surviving to 19 days after fertilisation.

“The overall message is that every embryo contained human cells that proliferate and differentiate to a different extent,” says Juan Carlos Izpisua Belmonte, a developmental biologist at the Salk Institute for Biological Studies in La Jolla, California, and one of the researchers who led the work.

Researchers hope that some human-animal hybrids – known as chimaeras – could provide better models in which to test drugs and be used to grow human organs for transplants. Members of this research team were the first to show in 2019 that they could grow monkey embryos in a dish for up to 20 days after fertilisation.

But the latest work has divided developmental biologists. Some question the need for such experiments using closely related primates – these animals are not likely to be used as model animals in the way that mice and rodents are. Nonhuman primates are protected by stricter research ethics rules than are rodents and they worry such work is likely to stoke public opposition.

“There are much more sensible experiments in this area of chimaeras as a source of organs and tissues,” says Alfonso Martinez Arias, a developmental biologist at Pompeu Fabra University in Barcelona, Spain. Experiments with livestock animals, such as pigs and cows, are “more promising and do not risk challenging ethical boundaries”, he says. “There is a whole field of organoids, which can hopefully do away with animal research.”

Izpisua Belmonte says that the team does not intend to implant any hybrid embryos into monkeys. Rather, the goal is to better understand how cells of different species communicate with each other in the embryo during its early growth phase.

Attempts at growing human-mouse hybrids are still preliminary and chimaeras need to be more effective and healthier before they can be useful. Scientists suspect that such hybrids might have trouble thriving because the two species are evolutionarily distant, so the cells communicate through different means. But observing cellular cross-talk in monkey-human embryo chimaeras, which involve two more closely related species, could suggest ways to improve the viability of future human-mouse models, Izpisua Belmonte says.

In the study, researchers fertilised eggs extracted from cynomolgus monkeys (Macaca fascicularis) and grew them in culture. Six days after fertilisation, the team injected 132 embryos with human extended pluripotent stem cells, which can grow into a range of cell types inside and outside an embryo.

The embryos each developed unique combinations of human and monkey cells and deteriorated at varying rates: 11 days after fertilisation and 91 were alive. This dropped to 12 embryos at day 17 and three embryos at day 19.

“This paper is a dramatic demonstration of the ability of human pluripotent stem cells to be incorporated into the embryos of cynomolgus monkey when introduced into the monkey blastocysts,” says Magdalena Zernicka-Goetz, a developmental biologist at the California Institute of Technology in Pasadena. She noted that this team, like others in the past, was not able to control which cells developed into which tissues – a key step to master before such models can be used.

Martinez Arias was not convinced by the results. “I expect better evidence,” especially of the later stages of development, he says. That embryo numbers rapidly plummeted as they approached day 15 of development suggests to him “that the things are very sick.”

Combining human cells with closely related primate embryos prompts questions about the status and identity of the resulting hybrids.

“Some people may see that you’re creating morally ambiguous entities there,” says Insoo Hyun, a bioethicist at Case Western Reserve University in Cleveland, Ohio. He says this team was thorough in following existing guidelines. “I think they did quite a bit of due care to be mindful of regulations and ethical issues.”

Meanwhile, international guidelines are catching up to the field’s advances – next month, the International Society for Stem Cell Research (ISSCR) is expected to publish revised guidelines for stem-cell research. These will address nonhuman-primate and human chimaeras, says Hyun, who is leading an ISSCR committee discussing chimaeras.

Many countries – including the United States, the United Kingdom and Japan – have at points limited research on chimaeras involving human cells. Japan lifted its ban on experiments with animal embryos containing human cells in 2019 and began funding such work that year.

In 2015, the US National Institutes of Health announced a moratorium on federal funding for studies in which human cells would be injected into animal embryos. In 2016, the funding agency proposed lifting the ban but restricting research to hybrids created after gastrulation, when the early nervous system begins to form.

More than four years later, the funding ban is still in place. An NIH spokesperson says the agency is awaiting the May ISSCR update “to ensure our position reflects the input from the community,” but did not provide a timeline for release of the agency’s rules.