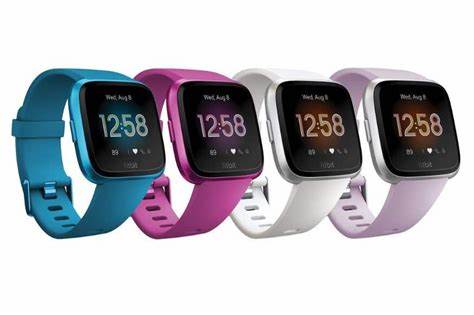 Stanford University is piloting a system that alerts wearable-device users to possible Covid-19 infection, using a two-alarm system. If signals surpass a certain threshold, it produces a yellow alarm. If they remain elevated for 12 hours, it produces a red alarm, strongly suggesting testing or isolating.

If there were only a yellow alarm, Stanford University biologist Michael Snyder says, frequent false alarms might cause some people to ignore alarms completely. Their system has already detected several cases in which the alarm has gone off prior to symptom onset, and it works with several watch types.

Scripps Research Translational Institute is also designing an alert system, Quer says. Such systems don’t require FDA approval as long as they don’t offer diagnoses, he says. They might simply say you have an elevated heartrate, which correlates with various issues, including a respiratory virus such as Covid-19 or the flu. “It’s kind of like your thermometer,” Snyder says. “An elevated temperature could be due to several things.”

One of the key challenges in any such alert system is the amount of uncertainty in the signal, making it hard to establish crisp baselines that, when breached, indicate a possible problem. Some people, for example, are on medications that muddy the data by affecting heart rate or they have difficulty breathing due to severe asthma, as some did in Snyder’s study.

And alarms can also be triggered by factors other than infection, including long flights, alcohol or stress. (“We call it the holiday bump,” Snyder says, whether due to travel or drinking or in-laws.)

Researchers at Purdue University and a health technology company called physIQ are trying to meet this challenge in a study to improve wearable signals, with an eye toward Covid-19 detection. Participants wear a Samsung smartwatch and an electrocardiogram patch on their chest for five days.

The patch collects more reliable heart rate data than the watch does. The researchers use it as training data so an algorithm can learn to interpret the watch data in a way that aligns with the patch data. Their goal is “to figure out how to get as much out of the wrist device as possible,” says Stephan Wegerich, physIQ’s chief science officer.

The study also examines usability. Participants must wear the watch snugly to improve the signals, and, unlike with factory settings, it collects raw data at a high frequency, so users have to charge it twice a day for several hours to keep the battery alive.

While that could make some casual smartwatch wearers balk, so far study participants haven’t complained. Craig Goergen, a bioengineer at Purdue, says it’s not been difficult for participants to figure out a routine that works for them. Worry over Covid-19 may motivate many more.

One limitation to existing studies is that participants might be representative of smartwatch owners who are conscious of Covid-19 infection, but not representative of the wider population. Duke University’s CovIdentify project aims to ameliorate that problem. As in several other studies, anyone with a smartwatch can enrol, but, according to Jessilyn Dunn, a biomedical engineer at Duke, they’ve also given out 400 devices to those who did not have them. They’ve yet to report results.

Meanwhile, Fitbit has conducted its own study, published in November in npj Digital Medicine. Their neural network, when limited to a false positive rate of five per cent (the setting is adjustable), could detect 15 per cent of Covid cases and do so a day before onset of symptoms, using data from that day and the previous four.

Not great, but better than nothing. Fitbit recently received $2.5 million from the Army to provide thousands of devices to healthcare workers and test a notification system for use in the field.

But if you build it, will they come? “Even if these technologies exist, just having the technology alone is usually not enough,” says physician Mitesh Patel, director of the Penn Medicine Nudge Unit and co-author of a paper in the Annual Review of Medicine on using wearable devices to monitor cardiovascular disease.

“You might get the young and engaged, the quantified-selfers, to use these devices for Covid detection or heart rate variability,” he says. “But to get older patients or the unmotivated, or patients of lower socioeconomic status, we have to think about mechanisms to both provide access and increase engagement.”

Engagement is especially urgent, he says, because those are the groups that could benefit most from these types of algorithms. Behavioural nudges to encourage usage might include having families use them as a group, or having employers offer monetary incentives.

Patel and others say they are encouraged by recent progress and that wearables may eventually be used to inform clinical decisions, beyond everyday wellness applications. According to Snyder, what they’re learning about Covid-19 detection might be applied to future pandemics, seasonal flu and other areas of medicine and public health.

It could potentially save many lives. “The pandemic has really brought all of that to a head,” says Dunn, of Duke. “So, I’m excited for us to be able to demonstrate what these things can do.”