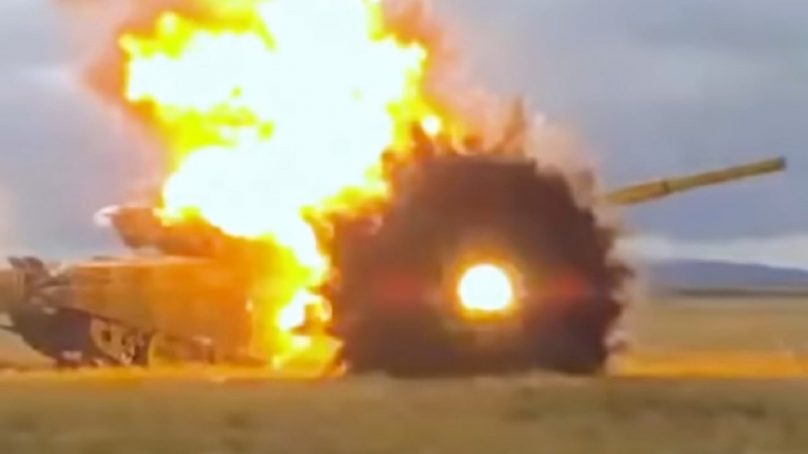 Russia has over centuries gone to war with its neighbours. The latest adventure follows a history that goes back more than 10 centuries ago with varying outcomes. The currents Ukraine Crisis is rooted in the long running ideological rifts between capitalist and communist ideologies.

Looking back, although only the Swedish king and 543 soldiers survived, he immediately raised another army of Turks to attack Russia. It is not something unique in the personalities of Tsar Peter or President Putin that drives Russia to require non-threatening neighbours. It is the collective Russian memory of invasion.

Each era of history has had its military super-power, and each super-power in turn attacked Russia:

The Mongol Empire was the largest in history, conquering the Chinese Empire and Persian Empire. In 1238, the Mongols crossed the Volga River with 35,000 mounted archers backed by 70,000 Turks including Chinese siege equipment for attacking walled cities. They conquered most Russian regions as well as Crimea. In 1240, the Mongols captured Kiev and killed most of its 50,000 inhabitants. An estimated 500,000 Kievan Rus (Russians, Ukrainians and Byelorussians) died during the Mongol invasion. For several centuries afterwards, regional Khans continued attacking Russia. For example, in 1382, the Golden Horde sieged Moscow, slaughtered 24,000 Muscovites, and took thousands of captives.

At the height of its power in the 1600s, the Ottoman Empire controlled half of the Mediterranean world and all of the Black Sea and Red Sea regions. The Crimean Tatars supplied the Ottoman slave trade by “harvesting the steppe”, taking an estimated 2 million captives between 1500 and 1700. For example, in 1571, a combined Crimean and Ottoman force of 120,000 invaded Russia, burned Moscow, killed an estimated 80,000 Russians, and took 150,000 captives to slave markets in the Crimea. Historians count more than 50 Tatar attacks.

Napoleon harnessed the passionate ideals of the French Revolution to coercive diplomacy and to new military tactics of massed armies and mobile artillery and was thus invincible in conquering Continental Europe in only nine years. In 1812, Napoleon assembled the largest army Europe had ever seen, comprised of an estimated 600,000 troops, including 98,000 from Poland. Although Napoleon won battles at Vilnius, Smolensk and Borodino, the Russian strategy of scorched-earth retreat across vast distances, including the evacuation and burning of Moscow, starved and demoralised the invading army. Relatively few survived the winter retreat from Moscow. Russian deaths are estimated to have been 150,000 – 400,000 soldiers and as many civilians.

Hitler harnessed the passionate ideals of fascism to coercive diplomacy and to new military tactics of blitzkrieg and was thus invincible in conquering Continental Europe in only two years. In 1941, Hitler assembled the largest army Europe had ever seen, comprised of an estimated 3.2 million German soldiers and about 500,000 from Italy and Romania. Although Hitler conquered vast stretches of territory, he failed to capture Moscow, Leningrad, Stalingrad or the Caspian Oil Fields.

The US Super Power

The US has harnessed the passionate ideals of democracy to coercive diplomacy and to new tactics of covert operations, advanced weapons technology and economic warfare to achieve what it calls, “full spectrum dominance”. Considering its own immense military resources and those of the other 27 NATO nations it controls, plus the resources of its Asian allies of Australia, New Zealand, Japan and South Korea, the US commands the greatest military might the world has ever seen. As with past super-powers, the US and its NATO allies seem to be setting their sights on Russia.

Perhaps Cold War history causes them to confuse Russia with the USSR and its many atrocities under the dictatorships of Stalin (native Georgian) and Khrushchev (native Ukrainian). Or perhaps racist perceptions of Russians as “untermensch” (a person considered racially or socially inferior) are still active in Western minds. Or maybe the vast resources of Russia are too attractive to leave untaken.

President Gorbachev allowed the reunification of Germany based on promises from President Bush and Chancellor Kohl that NATO would not expand eastwards, and then NATO did exactly that, even inviting Ukraine and Georgia to prepare for NATO membership. Georgia is closer to India than it is to the North Atlantic. All the while the US has been determined to install anti-missile systems in Poland, purportedly to shoot down non-existent Iranian ICBMs, but suspiciously capable of nullifying Russia’s nuclear deterrence.

Recent telephone intercepts show that US State Department officials (Victoria Nuland and Geoffrey Pyatt) selected an anti-Russian replacement government for the Ukraine when the elected, constitutional government was still in power. Then chaos in Kiev caused by unidentified snipers resulted in the elected Ukrainian government collapsing. As per US planning, the selected anti-Russian replacement government took power in Kiev and was quickly declared legitimate by NATO nations.

It is easy to see why Russia would perceive these events as another super-power preparing to attack Russia. It is perfectly predictable that Russia would react in ways to defends itself, no matter what the costs. It is mental manipulation by historical trigger-words to claim that Putin is “Hitler”, or that Stalin’s “Red Army” again threatens Europe. Because Americans know nothing of Russian history and have no national experience of foreign invasion, they cannot escape the confines of their own Cold War rhetoric. They cannot imagine history seen from a Russian perspective.

Europeans, however, know the horror of war on their own territory and well remember their own history of attacking Russia. European nations know how many times they’ve teamed up to attack Russia, and know it never worked out well; and probably will not this time either. In this crisis, it is the European nations who need to stand up and shake the super-power awake before an incident turns into a conventional war, turns into a missile war and then turns into a nuclear war. Those transitions could take 30 minutes. At this moment in human history, the world community has more pressing priorities than re-enacting our historical nightmares.