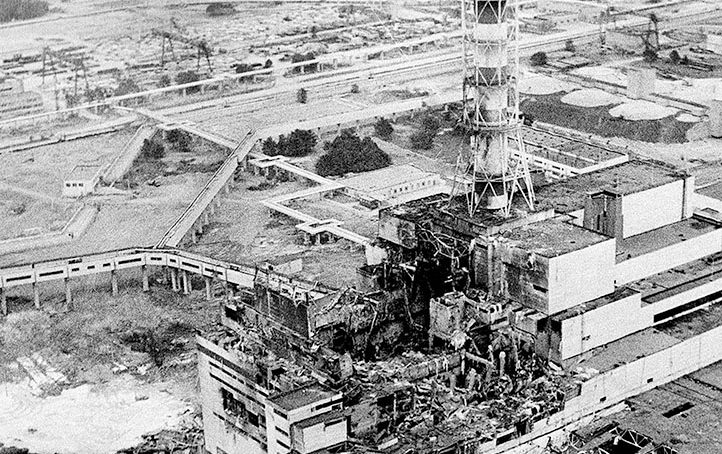 Radiation at Chernobyl in Russia have fallen since initial accident, but scientists disagree on its impact on wildlife

Is Chernobyl a radioactive wasteland reeling from chronic radiation, or a post-nuclear paradise with thriving populations of animals and other life forms? Studies don’t always agree about levels of mutations and other ill effects.

Thirty-five years after the meltdown at the Chernobyl nuclear power plant in northern Ukraine, reports often portray the area as a paradise for wildlife. Photos show foxes roaming the buildings of abandoned towns and bison and wild horses flourishing after people were permanently evacuated. But to some scientists, nature isn’t doing as well as it seems.

In fact, a debate roils in the scientific literature about the health of the microbes, fungi, plants and animals that live around Chernobyl. Some scientists have documented thriving wildlife now that people have left, suggesting that lingering radioactive contamination doesn’t pose a significant threat.

But other scientists have found mostly negative effects of radiation on the health and abundance of creatures, from birds to mammals, with many populations smaller in more heavily contaminated areas. This controversy has only sharpened in recent years.

Ultimately, “there’s a grain of truth in all of these studies,” says David Copplestone, a radioecologist at the University of Stirling in Scotland. The question is with interpretation. At the heart of the debate is not so much whether chronic radiation has any effect on living things, but at what dose the effects become significant. Radiation levels around Chernobyl have plummeted since the initial accident, but creatures that have reclaimed the area remain chronically exposed to low levels.

Figuring out whether this radiation causes harm — and if so, how and how much — is critical to understanding not just how the largest nuclear accident in history changed the environment, but also how chronic, low-level radiation affects living things generally. Examining why scientists reach different conclusions, and how recent research shines new light on the debate, gets us closer to the answer.

When a safety system test at one of the Chernobyl power plant’s reactors went badly wrong in April 1986, explosions unleashed a fiery plume of debris and radioactive atoms, or radionuclides, into the air that, over several days, may have emitted several hundred times more radiation than the atomic bomb dropped on Hiroshima.

More than two dozen first responders died within months after rapidly absorbing doses of up to 13,400 millisieverts (a sievert is a unit of radiation absorption; normal background radiation levels are usually around 1.5 to 3.5 millisieverts a year.)

Over subsequent decades, thousands of children and adolescents who likely absorbed somewhat lower doses developed thyroid cancer, a cancer type that, fortunately, most tend to survive.

A failed safety test at one of the Chernobyl nuclear reactors led to explosions and a massive radiation release in 1986. By some estimates, the accident released several hundred times more radiation than the atomic bomb dropped on Hiroshima in World War II.

Flora and fauna also suffered in the initial aftermath. A 600-hectare patch of pine trees died, along with many resident mammals and invertebrates in the area. The area with the trees’ skeletal remains is now called the Red Forest. The 1,600-square mile exclusion zone around the plant has remained largely devoid of people since the accident.

As time passed and the most dangerous radionuclides decayed, the zone became less inhospitable. The radionuclide iodine-131, for instance, vanished by the summer of 1986, leaving slower-decaying ones like cesium-137 and strontium-90 scattered unevenly across and within the zone’s soils, vegetation, fungi and animals.

Today, radiation levels are generally below what would induce acute radiation sickness and range from 0.4 millisieverts per hour in the Red Forest — thousands of times higher than background levels and dangerous to live in — to levels even lower than typical background radiation.

Normal background radiation levels aren’t usually harmful, because living things have biological mechanisms in place to prevent and repair small levels of damage, explains Kathryn Higley, a health physicist specializing in radioecology at Oregon State University. But it’s still a mystery exactly when and how harm starts to accrue for different species as radiation levels increase. The patchwork radiation landscape around Chernobyl creates an ideal setting to study this question.

But studying Chernobyl’s radioactive ecosystem also poses a mammoth challenge. Though scientists know how radiation affects individual cells — by causing DNA mutations or a type of molecular damage called oxidative stress, for instance — it’s proved hard to predict how that affects whole animals over their lifespans, Higley says. And it’s especially tricky to parse these effects — if they exist at all at very low doses — in the messiness of real-world ecosystems. Yet that, she says, is “the area of real interest right now.”

When the first reports on wildlife in the Chernobyl zone came to international attention in the early years of this century, scientists described it as flourishing in the absence of people. But two evolutionary biologists who teamed up to study the area’s birds around that time, Anders Møller of University Paris-Saclay in France and Timothy Mousseau of the University of South Carolina, presented a different picture.

In dozens of studies, the pair also documented that, with higher radiation levels, there were significantly lower numbers of soil invertebrates and a lower abundance of certain insect species and such mammals as hares and foxes.

Working with collaborators in Finland, they also documented a range of health effects in bank voles.

The pair documented a steady correlation between radiation levels and effects, such that the higher the radiation levels, the more pronounced the effects were. This relationship held even at radiation levels below what scientists had thought capable of causing harm, they observed.

“It was a huge surprise for us to see all of these pretty straightforward and large consequences of this kind of exposure across multiple species,” says Mousseau, who wrote about his and others’ Chernobyl research in the 2021 Annual Review of Ecology, Evolution, and Systematics.

Some other scientists have criticised much of the pair’s research for various reasons, one being caution about Møller’s work due to earlier scientific misconduct allegations. (Møller says the misconduct investigation was inherently flawed, for reasons he outlined in a statement; a French investigation didn’t find evidence of deliberate fraud, and the work in question doesn’t include the radiation studies.)

Another common critique is that Møller and Mousseau may have underestimated the radiation doses that the creatures they studied had been exposed to, because they didn’t account for radionuclides that animals had ingested or inhaled.

When other scientists reanalyzed Mousseau’s data on a dozen mammal species, they found that radiation had indeed caused declines in abundance, but only at higher doses than the pair had originally reported.

Russian nuclear disaster: No matter the consequences of lingering radiation, there are massive benefits to people leaving