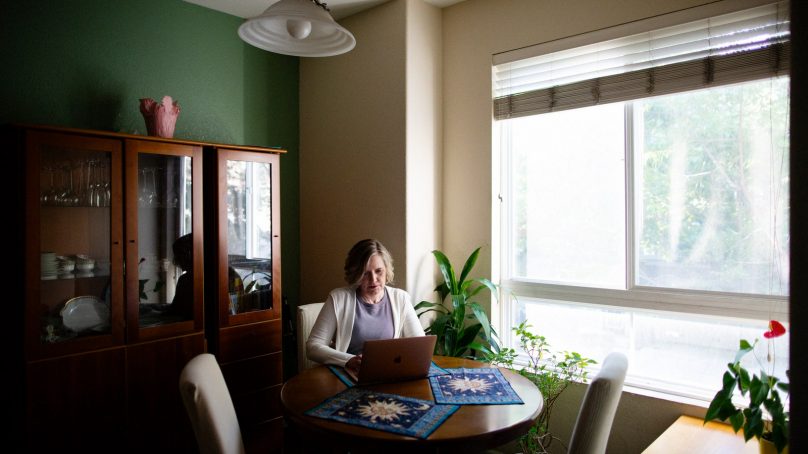 when Ksenia Coffman started editing Wikipedia, she was like a tourist in Buenos Aires in the 1950s. She came to learn the tango, admire the architecture, sip maté. She didn’t know there was a Nazi problem. But Coffman, who was born in Soviet-era Russia and lives in Silicon Valley, is an intensely observant traveller. As she link-hopped through articles about the Second World War, one of her favourite subjects, she saw what seemed like a concerted effort to look the other way about Germany’s wartime atrocities.

Coffman can’t recall exactly when her concern set in. Maybe it was when she read the article about the SS, the Nazi Party’s paramilitary, which included images that felt to her like glamour shots – action-man officers admiring maps, going on parade, all sorts of “very visually disturbing” stuff. Or maybe it was when she clicked through some of the pages about German tank gunners, flying aces, and medal winners.

There were hundreds of them, and the men’s impressive kill counts and youthful derring-do always seemed to exist outside the genocidal Nazi cause. What was going on here? Wikipedia was supposed to be all about consensus. Wasn’t there consensus on, you know, Hitler?

A typical person might have thought, Something is wrong on the internet again. What a bummer. Next tab. But Coffman is the person who finishes the thousand-page Holocaust novel. Whatever she chooses to spend her time on—powerlifting, fragrance collecting, denazification – she approaches the assignment like a straight-A student. You can time-travel back and watch her begin. Wikipedia never forgets; it keeps a permanent public record of every change an editor makes.

In early November 2015, you will find K.e.coffman in “20 July plot,” an article about the failed plan by German officers to assassinate Hitler. A sentence has jumped out at her. It says that some of the conspirators came to see the plot as “a grand, if futile gesture” that would save “the honour of themselves, their families, the army and Germany.” The claim isn’t supported by any sources. It’s conjecture, hearsay. And to her it seems strangely flattering.

Coffman navigates over to the Wikipedia article about one of the conspirators – Arthur Nebe, a high-ranking member of the SS. Apart from his role in the plot, Nebe’s main claim to notability is that he came up with the idea of turning vans into mobile gas chambers by piping in exhaust fumes. The article acknowledges both of these facts, along with the detail that Nebe tested his system on the mentally ill. But it also says that he worked to “reduce the atrocities committed,” going so far as to give his bloodthirsty superiors inflated death totals.

Coffman will recall that she feels “totally disoriented.” She cannot believe that an innovator in mass murder would have tried to protect the Jews and other supposed subhumans his troops rounded up. She checks the footnotes. The claim is attributed to War of Extermination, a compendium of academic essays originally published in 1995.

Coffman knows the book is legit, because she happens to have a copy on loan from the library. When she goes to the cited page, she finds a paragraph that appears to confirm all the Wikipedia article’s wild claims. But then she reads the first sentence of the next paragraph: “This is, of course, nonsense.”

The level of bad faith is eye-opening for Coffman. She is “very appalled.” She sees that her confidence in Wikipedia was “very much misplaced.” All it takes to warp historical memory, she realises, is something this small, achievable for almost anyone with a keyboard.

“So few people can have so much impact, it’s a little scary,” she says. She begins to turn a more critical eye to what she sees on Wikipedia. Especially the footnotes.

In a long spree of edits, Coffman cleans up the two articles. She goes to the Talk page for “20 July plot,” where editors debate changes to the main article. She copy-pastes the language about the grand, futile gesture. “I would like to remove this part,” she writes. “Thoughts? Objections?” Another editor voices support. With a click, the paragraph is gone.

In the Nebe article, Coffman adds a “[citation needed]” tag to the flagrantly false claim. She identifies two more dubious sources – one misleadingly quoted, one potentially invented. She checks out a book called The SS: Alibi of a Nation to make sure. Over and over again, she reworks Nebe’s legacy: At first, it’s that some historians “have a much harsher view” of him than others. Then it’s that they “have a less generous view.”

Then it’s “Historians have a negative view of Nebe and his motivations, despite his participation in the 20 July plot.” Coffman is beginning to understand that history is an edit war. Truth, factual and moral, hangs in the balance.

Similar battles over how to remember the past have been raging across society. Do we let the old bronze statues stand in our boulevards, or do we put them in a museum someplace, or do we melt them down? Can there be a “hero” who fought for a morally rotten cause? Are qualities like valour and self-sacrifice and tactical brilliance worth admiring anywhere they occur, even if, say, racial supremacism is there too? Some choose to take to the streets. Coffman fights on the terrain most familiar to her, with the weapons she knows best. Not that she would put it that way; she’s not big on war metaphors.

Several weeks into her new obsession, Coffman realises that she’s supposed to fill out her User page—the Wikipedia equivalent of a profile, where editors broadcast opinions, grudges, achievements, pet peeves. One Saturday night she updates it for the first time. “I’m a new editor to Wikipedia,” she writes. “I enjoy contributing and engaging with other editors.”

An hour later, past midnight, she adds: “My editing style tends to be bold.”

Report: To reduce global warming 50 per cent of fossil fuel should remain untapped