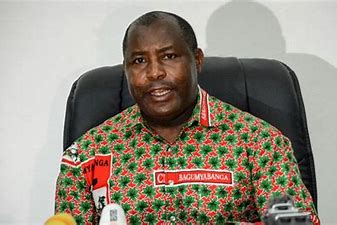 Since his inauguration in 2020, President Évariste Ndayishimiye has introduced a raft of foreign and domestic policy reforms to salvage Burundi’s international reputation and restore economic partnerships. His efforts seem to be paying off, with the European Union (EU) announcing on February 8 that it will be lifting the sanctions it placed on Burundi in 2016.

However, civil society organisations including Human Rights Watch, have expressed disappointment over the termination of sanctions. They worry that removing the embargoes without pre-conditions disincentivises the government from substantially improving human rights and further opening the political space.

The United Nations (UN) Commission of Inquiry on Burundi’s September 2021 report, which describes the country’s human rights situation as dire, confirms the fears of civil society organisations. The report cites cases of arbitrary arrests and forced disappearances by the National Intelligence Service, violent attacks on civilians by the government-affiliated Imbonerakure youth militia and intimidation of journalists.

The UN report and civil society concerns raise questions about whether the new government’s reforms hold up to scrutiny. And to what extent are Burundi’s policy shifts primarily motivated by the need to restore its international reputation and remove sanctions?

The international community sanctioned Burundi after Pierre Nkurunziza’s 2015 third presidential term bid triggered a violent political crisis. This escalated into street demonstrations, a failed coup and armed attacks on military garrisons that displaced over 300,000 people by 2018. Burundi’s government responded with a brutal crackdown on protesters and introduced restrictive legislation against media and civil society organisations.

As the crisis deepened, international observers and civil society organisations reported numerous instances of arbitrary arrests, enforced disappearances, torture and state-sanctioned extrajudicial killings. These human rights violations and the closure of the political space attracted a range of international sanctions against the country.

The EU’s February statement credited the improvement in Burundi’s political stability and human rights record since 2020 as motivation for lifting the embargoes. The EU will now resume developmental cooperation and restore financial aid to the government. The European body is also lifting travel restrictions on four high-level officials, including Prime Minister Alain-Guillaume Bunyoni and Chief Police Commissioner Godefroid Bizimana.

The removal of sanctions brings welcome relief to Burundi’s economy, which has been in recession since 2015. Burundi’s GDP per capita has contracted by 16% in the past five years due partly to the economic sanctions, aid cuts and global fallout from COVID-19. Its trade deficit increased as the country became heavily dependent on imports that have emptied state coffers.

In addition to political engagement with the EU and US on sanctions relief, Burundi has been connecting with multilateral institutions. In 2020 it reversed its passive Nkurunziza-era Covid-19 strategy and started cooperating with the World Health Organization and World Bank. The country has also joined the African Peer Review Mechanism to show the international community that the government is committed to good governance.

Ndayishimiye’s recent moves also show his intention to rebuild regional partnerships with his counterparts in the East African Community. The president visited Kenya, the Democratic Republic of the Congo, Tanzania and Uganda in 2021. Rwanda’s prime minister was hosted at Burundi’s 59th Independence Day celebration – a move that would have been unthinkable after Nkurunziza accused Kigali of supporting Burundian dissidents.

A raft of domestic policy shifts supported Burundi’s efforts to get sanctions lifted. Ndayishimiye has overturned some repressive measures introduced by Nkurunziza during the 2015 political crisis. These reforms include lifting media and civil society restrictions and pardoning several journalists and human rights activists.

So far, Burundi’s international campaign has yielded positive results. The removal of EU sanctions comes after US President Joe Biden revoked Executive Order 13712 in November 2021, effectively lifting his country’s sanctions against Burundi. The decision means that the US will remove travel bans and lift asset blocks on 11 high-level officials.

The US will also be restoring financial and technical support to Burundi’s security forces deployed in peace operations under the African Union Mission in Somalia. The move by the US and EU to restore direct budgetary support to the administration provides much-needed foreign currency reserves.

While the international community has largely welcomed Burundi’s reforms, these shifts could be largely symbolic. For example, it is unlikely that Ndayishimiye will reverse Nkurunziza’s decision to withdraw from the International Criminal Court.

The court has implicated several high-profile members of the ruling party in human rights violations. Also, the government hasn’t made any meaningful effort to engage with the significant portion of Burundi’s civil society and opposition figures who were exiled during Nkurunziza’s third term.

It remains to be seen whether Ndayishimiye’s domestic reforms will translate into substantive changes without pressure from international sanctions.

In just two decades, climate change will get worse and make the world sicker, hungrier, poorer and gloomier – report