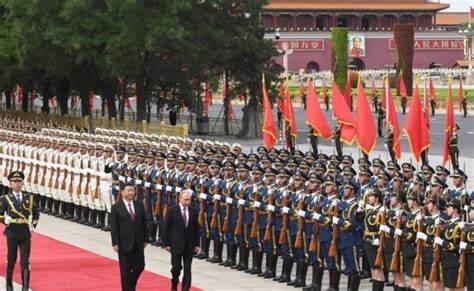 The challenges are different from those the US and its network of alliances faced in the Cold War. Russia and China have built a thriving partnership based in part on a shared interest in diminishing US power. Unlike the Sino-Soviet bloc of the 1950s, Russia is a critical gas supplier to Europe, while China isn’t an impoverished, war-ravaged partner but the world’s manufacturing powerhouse with an expanding military.

In deploying a huge force and last week ordering what he called a “special military operation,” Russian President Vladimir Putin is demanding that the West rewrite the post-Cold War security arrangements for Europe and demonstrated that Russia has the military capability to impose its will despite Western objections and economic sanctions.

To do this, Mr Putin shifted military units from Russia’s border with China, showing confidence in his relations with Beijing. The two powers, in effect, are coordinating to reshape the global order to their advantage, though their ties stop short of a formal alliance.

This emerging order leaves the US contending with two adversaries at once in geographically disparate parts of the world where America has close partners and deep economic and political interests. The Biden administration now faces big decisions on whether to regear its priorities, step up military spending, demand allies contribute more, station additional forces abroad and develop more diverse energy sources to reduce Europe’s dependence on Moscow.

“We all thought we were looking at a Europe whole, free and at peace indefinitely,” said Michele Flournoy, who served as the Pentagon’s top policy official during the Obama administration. “We knew that Russia would conduct grey zone operations and that Putin would use his KGB playbook to create instability on his periphery. But a wholesale invasion of a sovereign country to reorient its government is a different moment.”

“And we’re seeing that while Beijing doesn’t really like Putin’s tactics, they’re willing to band together as authoritarian states against the Western democracies,” Ms Flournoy added. “We are going to see more and more of that in the future.”

The US predicament in part grew out of moves by Washington at the end of the Cold War. As the globe’s sole superpower, the US pushed to promote democracy around the world and expand the North Atlantic Treaty Organisation (NATO), the key Cold War military alliance in Europe, to include former members of the Kremlin-dominated Warsaw Pact and some former Soviet republics. That responded to the decades-old yearnings of East European nations to be free of Moscow’s dominion.

Mr Putin, however, saw his rivalry with the West as a zero-sum game and set about moving Russia toward its Soviet-era prominence, with greater say over the nations on its periphery.

For much of the past decade, the US security establishment began taking note of what the Pentagon in 2015 called the “re-emergence of great power competition” and shifted from its emphasis of counterterrorism operations in the Middle East and Southwest Asia.

In setting priorities as the Pentagon seeks to retool for future conflicts, Defence Secretary Lloyd Austin has repeatedly cast China as the “pacing challenge” while Russia was seen as the lesser longer-term danger.

The projection matched President Biden’s priorities even as he pledged to buttress the world’s democracies. He took office wanting to focus on the pandemic, the economy and other domestic issues, promising a “middle class” foreign policy that would deliver returns for Americans after costly wars in Iraq and Afghanistan.

Managing relations with Moscow would help the administration concentrate on the military, economic and technological competition with Beijing.

Toward this end, Mr Biden held a summit meeting in June with Mr Putin to forge what the White House called a “stable, predictable” relationship. To put guardrails on relations with Moscow, Mr Biden agreed to a five-year extension of the New START treaty limiting long-range US and Russian nuclear arms.

The White House also directed the Pentagon to explore using Russian bases in Central Asia to prevent the re-emergence of a terrorist threat in Afghanistan after the withdrawal of US troops.

Mr Putin, however, tried to take advantage of Washington’s focus elsewhere to pursue his agenda of bringing Belarus and Ukraine into Moscow’s sphere of influence, most notably with Russia’s major military build-up on the doorstep of the US’s European allies and its new assault on Ukraine.