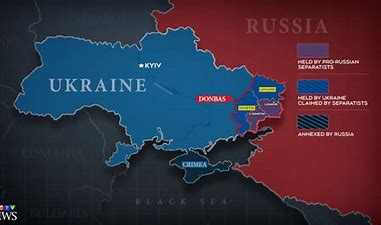 In the Donbas region of eastern Ukraine, the ground has been behaving strangely. In some places, it is sinking; elsewhere it “heaves” – bulging upward, according to satellite data released this week. Before it became a conflict zone, the Donbas has long been Ukraine’s coal country, and the earth is riddled with hundreds of miles of tunnels underneath cities, factories and farms – many of them abandoned.

Recently, those shafts have been flooding, causing the surface to shift and carrying toxic chemicals that now threaten the region’s water supply. One of those mines, the site of a nuclear test in the 1970s, remains potentially radioactive.

Ukrainian scientists have warned that the risks to the region could be “deeper and more dangerous than Chernobyl.”

Since 2014, when Russia’s annexation of Crimea sparked fighting in the Donbas, the region has been the site of a parallel ecological catastrophe. It involves not only the mines, but toxic leaks from industrial facilities that have fallen into disuse and contamination caused by shelling and munitions.

That’s partly due to the chaos of a drawn-out war: In a contested region, who should bear the costs of pumping groundwater out of abandoned mines? At other times, the environment has been wielded as a weapon of war, such as when militants shelled chlorine stocks at a wastewater plant, threatening to ruin the local water supply.

The health effects of these kinds of wartime incidents are likely to be felt long after the physical conflict subsides, says Doug Weir, director of research and policy at the UK-based Conflict and Environment Observatory. But for that same reason, they are often overlooked, because the damage unfurls in slow motion, long after the bombs have stopped falling and the world’s attention has moved on.

Now eight years into that conflict, last week’s Russian invasion will escalate the environmental harms of war across the rest of Ukraine.

“It’s an extension of what we’ve seen in the Donbas, where you have a conflict amidst this super concentrated amount of heavy industry and this grim environmental history,” Weir says. Much of the fighting is now occurring in urban areas like Kyiv, Kharkiv and Mariupol, where industrial facilities, military installations, and radioactive waste repositories have come under fire from Russian planes and artillery.

Those weapons have the potential to leave not only immediate destruction, but a longer tail of polluted air and water that will be felt by nearby residents long after the conflict subsides.

Since the mid-1990s conflict in Kosovo, the United Nations has tried to reel in the environmental harms in conflict zones and hasten clean-up in the aftermath. But some countries, including Russia, have pushed back on setting up guardrails, Weir notes.

“They take quite a fatalistic approach to environmental damage in conflict as the cost of doing business,” he says. As the conflict drags on – seemingly longer than Russian forces anticipated – Weir fears that as the Russian military gets more desperate, the environmental damage will not just be collateral, but a tool of force against Ukrainians.

Not that issues like pollution are top of mind while air raid sirens are ringing across the country, notes Andriy Andrusevych, an environmental lawyer based in Lviv, Ukraine. The country is currently flying blind in terms of watching industrial emissions, he adds, since pollution monitoring systems are largely offline or going unchecked. But as a heavily industrialised country, Ukraine already had a baseline of bad air.

“They were already one of the worst air quality areas in Europe prior to this,” says Mary Prunicki, director of air pollution and health research at the Sean N. Parker Center for Allergy Research at the Stanford University School of Medicine. “If some of these industrial sites are being targeted or accidentally hit and burning, that’s going to put a lot of toxic substances into the air.”

This air pollution will be wildly complex, due to the nature of modern war. Missiles, shelling and tank rounds are chewing up pretty much the entirety of the built environment. Explosions fling a wide array of materials into the air, from heavy metals in industrial sites to the concrete, cables and piping in roads, to asbestos from buildings.

The material, which is linked to lung disease and cancer, was only recently banned in Ukraine. And that’s to say nothing of the heavy metals and various carcinogens in the explosives themselves.

Put another way, soldiers and civilians are inhaling a much more complicated variety of air pollution than, say, the exhaust from a highway. “Any time you destroy something with the modern chemicals that we use, not just the petrochemicals, but asbestos – all of these chemicals – there will be toxics put into the atmosphere, including lead and mercury,” says Neta C. Crawford, codirector of the Costs of War program at Boston University.

“It’s a toxic stew that’s been aerosolized. And then, of course, some of that will get into the soil and groundwater.” It’s certainly not helping matters that as the war disrupts electricity generation across Ukraine, people may switch to backup generators running on diesel, adding those fumes to the mix.

No particulate matter is good to have in the lungs, not even natural materials like dust. Our lungs have evolved to clear these foreign objects –when you cough up mucus, that’s your body expelling the intruders – but PM2.5 (particulate matter smaller than 2.5 micrometers) can slip past these defences and get deep into the lungs, eventually passing into the bloodstream. That delivers heavy metals all over the body, which then persist in tissues.